Bombshell PrivatBank ruling and other disturbing moves on the eve of Ukraine’s presidential electionsUkraine needs real debates between Poroshenko and Zelenskiy – candidates are not “colouring books”Where Ukraine’s presidential candidates Poroshenko and Zelensky (don’t) stand on Crimea and DonbasZelensky urged to veto law that puts Ukraine on track for more damning European Court judgments Court in Ukraine freezes all of former President Poroshenko’s assets over ‘treason’ charges On the pettiness of suspicion of Petro PoroshenkoUkraine’s ex-President Poroshenko accused of ‘treason’ and ‘financing terrorism’With Russia waging war against Ukraine, ask Zelensky why he wants impunity for war criminals 400 Ukrainians imprisoned without a crime in Russia, occupied Crimea and Donbas Zelensky fails crucial test for restoring justice in Ukraine Free Yaroslav Mysyak: NGOs call on US President to ask Zelensky to pardon Ukrainian youth pastor Why is President Zelensky prolonging impunity for war crimes in occupied Crimea and Donbas? Zelensky’s ethnically profiled ‘sanctions’ put Ukraine on a level even Russia has not reached Zelensky imposes sanctions against men who fought for Ukraine in Donbas Judicial reform in Ukraine is “doomed” if current bill gets passed – Venice Commission Zelensky"s reform risks dissolving notorious court but leaving judicial corruption intactThere are signs of usurpation of power: a statement by human rights organizations regarding sanctions against Ukrainian citizensUkraine imposes sanctions on pro-Russian MP Medvedchuk & his wife. What about criminal proceedings?Ukraine’s President Zelensky blocks three pro-Russian channels linked with MedvedchukZelensky gives top post to official involved in storming of Maidan
• Topics / Elections
• Topics / Politics and human rights 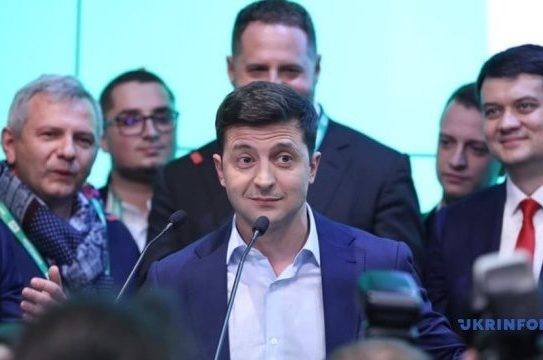 On 21 April Ukraine voted in fair and democratic elections to elect a new President, ousting the current President Petro Poroshenko.  President-Elect Volodymyr Zelensky appears to have received a record number of votes, although what almost three quarters of the population voted for remains largely unclear.  His silence or vague assurances have been particularly worrying with respect to Crimea, Donbas and the huge number of Ukrainians whom Russia is holding prisoner.

Zelensky’s consistent lack of detail regarding what he stands for and what policies he will introduce was almost certainly a deliberate policy, which significantly broadened his electorate. As well-known sociologist Iryna Bekeshkina puts it, Zelensky’s high support was largely “the result of vagueness, because each person pins his or her own dreams, wishes and expectations on Zelensky”.  This led to a situation where people with diametrically opposite views, for example, about joining NATO, all voted for the same candidate.  He will divide his electorate the moment he starts taking his first steps, she adds.

Bekeshkina does not see these elections having in any way united the country.  The only thing people were united on was the need for change.  She calls this “a kind of sentence on the political system and the political elite”.

This may well have been what people voted against, but it is not at all clear that what they will get is a break with the old political elite. Zelensky only revealed some details about his team two days before the elections, and several members both of the publicized team, and of those people around him who were not named, like Serhiy Bohdan, are people who held posts under President Viktor Yanukovych.  Andriy Portnov, who was Deputy Head of the Presidential Administration under Yanukovych and who took part in drawing up the notorious ‘dictatorship laws’, announced shortly after the voting ended that he is planning to return to Ukraine.  Portnov himself made it clear that this is because of the election result, and LB.ua has reported that Valery Pisarenko, Portnov’s associate and MP, has been “an informal Zelensky representative in the Verkhovna Rada.”  Bohdan was twice government representative on (the largely cosmetic) anti-corruption policy under Yanukovych and is, in fact, for this reason now precluded from holding public office.  As reported, Skhemy investigative journalists found evidence that Bohdan had held a secret meeting with the head of the Constitutional Court which is due to give its judgement as to whether the Law on Lustration is constitutional.  A ruling revoking this law would enable Bohdan to hold office under the new President.

1 + 1, the media channel owned by Ihor Kolomoisky, the oligarch believed to be supporting Zelensky, gave the latter huge coverage, including showing him in films during the day when all campaigning is prohibited.  This is also hardly a break with the past.

In the end, the only ‘debate’ that Zelensky took part in was the show at the Olympiysky Stadium on 19 April.  He also failed to attend a discussion with civic organizations on 17 April.  His team responded to the invitation by saying that Zelensky would answer questions from civil society after the second round.  This is, of course, like saying that you’ll tell somebody about the state of the car for sale only after a person has bought it, yet the tactic appears to have got him elected.

Zelensky  has come to power on a vague ‘reform’ platform, and it is interesting that around 50 civic organizations reacted angrily after one of the few occasions when he tried to go into detail by publicly berating the supposed lack of decent reforms in healthcare.

During his first press briefing, Zelensky did, at least, announce that his first task would be “to return all our prisoners, prisoners of war, our sailors”.  In fact, the 24 seamen whom Russia seized on 25 November 2018 are prisoners of war, although it may be unfair to quibble over words during a first briefing on election night.

More detail is, however, urgently needed, especially since such questions were largely ignored throughout his campaign.  This was despite the fact that there are now over 100 political prisoners, as well as 24 POWs, held in occupied Crimea or Russia and the scale of the repression, especially against civic activists and journalists, is mounting in Crimea.  There are also well over 100 civilian hostages and POWs held in Donbas, and nobody is in any doubt that it is Moscow that will decide when any exchanges or releases take place.

Zelensky’s program made no mention of Crimea at all, and in one of his few interviews, he made it clear that he sees no return of Crimea to Ukraine without a regime change in Russia.  There is nothing to suggest that either Zelensky or Poroshenko answered the hard-hitting questions put by the civic initiative #LiberateCrimea, however Zelensky’s team did respond to an open appeal to answer five important questions about Crimea and his position from veteran Crimean Tatar leader and MP Mustafa Dzhemilev.  The answers from the team were broadly satisfactory, in that they did clearly state that Crimea was occupied territory and that it could not be a bargaining tool for any peace deal on Donbas.

The problem was, however, that Dzhemliev had addressed Zelensky and he therefore repeated his questions, asking for the then presidential candidate to answer them himself.  It is he who was running for office, not the team whom Zelensky could later get rid of and whose makeup is not entirely clear.  There was no direct answer from Zelensky.

The questions certainly need to be addressed.  Russian President Vladimir Putin made it quite clear after the seizure by Russia of the 24 POWs that he would not speak with Poroshenko as he didn’t want to help the latter’s election campaign. At the moment, Russian propaganda channels are largely positive about Zelensky, though this may be because he is not Poroshenko.  Dzhemilev was not alone in wanting to know what concessions Zelensky might be willing to make in order to establish “peaceful, neighbourly relations with the Russian Federation”.

During the same press briefing on 21 April, Zelensky spoke of mounting “a very powerful information war to end the fighting in Donbas”.  He said that he would be inviting journalists for a long conversation and promised to tell them about “our action plan”.

There were no further details, although in the above-mentioned earlier ICTV interview, Zelensky did propose “to launch a serious information war and win it” as strategy towards ensuring reintegration of Donbas.  This was seemingly to ensure that people in such areas fully understand that they are Ukrainians and would include, he said “a powerful international channel, in Russian, which would show the truth about Ukraine. He did not explain the means by which the certain attempts by Russia or their proxy ‘republics’, to block this channel would be overcome.

Perhaps Zelensky has worked out a plan, but, if so, he needs to come up with information soon.

The other disturbing part of this idea is that it seems to concentrate on changing Ukrainians’ attitudes, with this ignoring the fact that it is Russia that has armed, manned and financed the war in Ukraine, and it is Moscow that must be forced to end it.