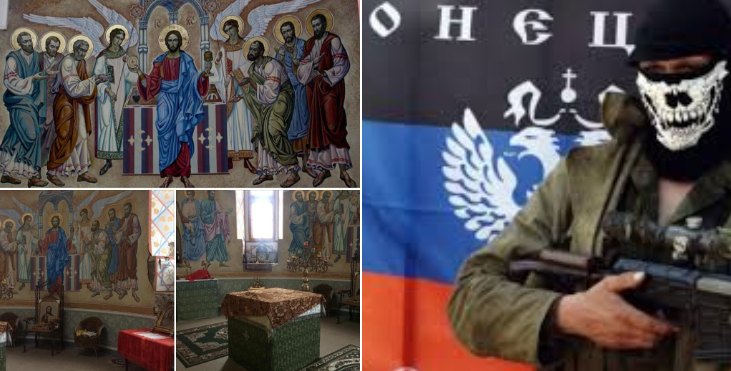 A Ukrainian Orthodox church in the self-proclaimed ‘Donetsk people’s republic’ [DPR] is to be forcibly taken from its congregation and handed over to the Moscow Patriarchate, with other Ukrainian Orthodox congregations also in danger of losing their places of worship. Metropolitan Epiphanius, Primate of the Orthodox Church of Ukraine recently issued an appeal to the international community, warning that the very existence of the Church was in danger in occupied Donbas.

The Donetsk – Mariupol Eparchy reported on 25 April that the so-called ‘DPR enforcement agency’ had put pressure on the Mayor of the village of Kuznetsovo-Mykhailivka to appropriate the church.  This is particularly shocking since the church building was already once plundered in Soviet times and even used as a warehouse.  It was the local community in the 1990s who had sought and gained permission from the Orthodox Church under the Kyiv Patriarchate to reinstate the church, with money for parts of this gathered from donations. The icons and other paintings were drawn by well-known artists from all over the country.

Serhiy Horobtsov, Head of the Eparchy, explained to Donbas Realii that he has communicated via Facebook with a priest from the Moscow Patriarchate who claimed that Kuznetsovo-Mykhailivka is “a Russian village”.  Horobtsov dismisses this claim.  He has lived in the region all his life, he says, and everybody spoke in Ukrainian, or in ‘surzhik (a russified version of Ukrainian).

The priests serving in the Church in Kuznetsovo-Mykhailivka had continued providing both services and assistance to people in the area, and did not engage themselves in politics.

Horobtsov says that he has been told by believers that virtually every week they have been summoned and “worked on”.  They are told that they should not go to Ukrainian churches as this will put them in danger, that they won’t get through the checkpoints between the so-called ‘republic’ and government-controlled Ukraine and that their pensions will be taken away from them.  Since people living in occupied Donbas need to register in government-controlled areas to receive their pension, this is a serious threat.

In the statement from the Orthodox Church of Ukraine issued on 25 February 2019, Metropolitan Epiphanius pointed out that the situation with respect to religious freedom had steadily worsened in the so-called ‘Donetsk and Luhansk people’s republics’ over the past five years.

“This was seen in systematic persecution; harassment; arrests; seizure of churches, etc. However, if up till the present time we were dealing with significant restrictions and violations of rights, now, from 1 March 2019, there is danger of the total ban on the activities of congregations and religious clergy of our Church; the total confiscation of the congregations’ property and deportation of priests from territory under the control of the so-called ‘DPR’.”

This is due to the new demand that congregations “register under the laws of the republic”, a demand, Epiphanius says, cannot be fulfilled as these ‘laws’ were issued by a structure which is not recognized as a state by anybody.

“From 2 March, 36 churches and premises, as well as the Eparchial House of Mercy, which belong to congregations of our Church in some occupied areas of the Donetsk oblast may be “confiscated for the good of the republic”, its priests – deported”.

He calls on the UN, OSCE, the EU, all countries acting as guarantors of the Minsk Accord, and all democratic countries to help prevent such destruction of their Church.

The Russian-controlled ‘republics’ are basically following Russia’s lead with these methods directed against all religions aside from the Orthodox Church under the Moscow Patriarchate.  Both Luhansk and Donetsk ‘republics’ have banned or virtually banned the Jehovah’s Witnesses, and are increasingly persecuting Protestant Churches.  In the so-called ‘Luhansk republic’, for example, essentially identical demands that all religious communities ‘re-register’ were used as a pretext to refuse registration to all communities of Baptist, Pentecostal, Seventh Day Adventist and other Protestant churches.