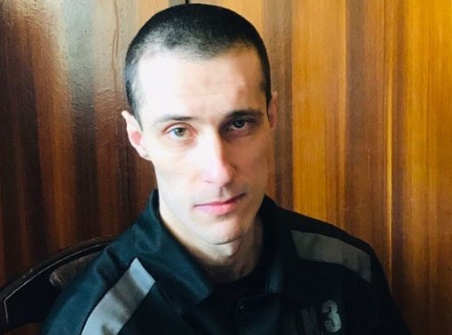 Ukrainian political prisoner Oleksandr Shumkov is, as feared, facing physical violence and unwarranted punishment from Russian prison staff, both his lawyer and a lawyer from the Russian NGO Public Verdict have reported.  Formal complaints have been lodged, though the chances of these changing anything are, unfortunately, low.

Lawyer Roman Lyzlov visited Shumkov in Prison Colony No. 4 in Torzhok (Tver oblast) on 23 April.  Shumkov told him that he had been beaten by staff, first at SIZO No. 1 in Tver before reaching the Torzhok prison, and then at the latter.

According to Shumkov, on 14 March, the SIZO staff took him from his cell to the shower area where they beat him with a rolled-up rubber mat, inflicting at least 15 blows to his back and legs.  Despite severe pain, he had not sought medical care as he expected that this would result in further reprisals.

From 22 March to 2 April, he was held in a cell of 12 m² with five other men.  He spoke of the unbearable stuffiness, the mould on the walls and ceiling, and the pungent smell of damp in the cell.

He arrived at the prison colony in Torzhok on 4 April and was immediately beaten again by one of the staff.  The latter used his baton to strike him at least five times on the legs, saying that this was for the Berkut special force officers killed during the last days of Euromaidan.  During the two bloodiest days, almost 100 activists were killed, as well as 10 Berkut officers.

Public Verdict lawyer Iryna Biryukova had visited Shumkov the day before, and immediately lodged a complaint with the Torzhok City Court over the fact that Shumkov had been placed in a punishment cell the day after he was brought to the prison. It was claimed that this was because he had put on a prison jacket.  This would already be a bizarre pretext for the punishment conditions which are very bad, however Biryukova makes it clear how preposterous the situation was. Shumkov had simply tried on the jacket after sewing a tag with his name and initials on the all the prison clothes issued to him, including the jacket.

He was sent on that pretext to a punishment cell [SHIZO] for 10 days, and had not even finished that, when he received a further 14 days.  This time, his supposed ‘infringement’ was that he took the jacket off in the cell while washing and shaving.

Biryukova spent half the day trying to see Shumkov, with all kinds of excuses and measures being used to try to prevent this. It was only after she contacted the Tver Oblast Penal Service and threatened to inform the Ukrainian consul that she was allowed in to see Shumkov.  He told her that they are preparing him for harsh conditions, with him never being allowed into the normal prison colony.

This, unfortunately, is likely, judging by other political prisoners, like Valentin Vyhivsky who has been held in effective solitary confinement since being abducted from Crimea in September 2014.

Shumkov has another year and eight months of his sentence to serve.  In both his case, and that of Volodymyr Balukh, who has been moved to the same Russian prison, there is particular concern that they will face physical reprisals, as well as constant ‘punishments’ for nothing, because of their unwavering pro-Ukrainian position.

Shumkov was sentenced on 4 December 2018 to four years’ imprisonment on the quite surreal charge of involvement in Right Sector, a perfectly legal Ukrainian party while in Ukraine.  ‘Judge’ Viktor Rukhmakov, from the Sevsk District Court in the Bryansk oblast did not simply ignore the absurdity of the charges, but also the very strong evidence that the 29-year-old Ukrainian had been abducted to Russia.

Shumkov, who has legal training, pointed out during his final address to the court that he was charged with activities which he had never denied – of involvement in Euromaidan and then in Ukraine’s operation against the militants in Donbas.  By bringing criminal charges based on the assertion that such activities “threatened Russia’s interests”, he said, “the Russian Federation is acknowledging its presence on Ukrainian territory”.

Shumkov disappeared while working as an investigator for the military prosecutor of the Kherson Garrison.  It was on 26 September, 2017, over a month after he vanished, that Larisa Shumkova received a letter from the Russian FSB for the Bryansk oblast saying that her son was being held in the Bryansk SIZO [remand prison] on suspicion of “committing a crime” under Article 282 § 2 of the Russian criminal code – ‘involvement in an extremist organization’.

Shumkov had taken part in Euromaidan and in 2014 was a guard for Dmytro Yarosh, the then leader of Right Sector, before joining the Armed Forces.  Although he was no longer a member of Right Sector in 2017, his former Maidan activism, his high profile for Russia because of his link with Yarosh, as well as his current military role all made it simply inconceivable that he would have voluntarily crossed into Russia.

He is, in fact, believed to have set off for a meeting with an informer who was supposed to provide information about supplies of drugs smuggled from the Kremlin-backed ‘republics’ in Donbas to government-controlled oblasts.  The car in which he was driving came under attack near the Russian-Ukrainian border.  A taser gun was used against Shumkov, who was taken, unconscious, across the border into Russia.

Neither the first ‘court’, nor three Bryansk Regional Court judges – Inessa Belova, Vladimir Zenichev and Olga Mazova – who on 31 January 2019 upheld the original 4-year sentence saw any problem with making the law retroactive either.  Shumkov was sentenced for involvement in Right Sector which had ended many months before Russia declared the organization illegal.

Our letters tell Oleksandr that he is not forgotten, and also send an important message to Moscow that Russia’s politically motivated abductions and imprisonment of Ukrainians cannot be covered up.

Letters need to be in Russian and on ‘neutral subjects’. If this is difficult, the following can be copied out and maybe sent with a photo or picture.

[Hello, I wish you good health, courage and patience and hope that you will soon be released.  You are not forgotten.  ]

(the name is at the end, together with year of birth.  There will be more chance of it getting through if the name is written in the Russian manner (Alexander)