Russian proxy Donbas republic sentences charity worker with HIV to 11 yearsStudent imprisoned for ‘liking’ pro-Ukrainian social media posts in occupied LuhanskRussian proxy republics ‘officially’ seize Ukrainians’ homes in Donbas‘Cities speak’ – Digest of Russian ProtestsIt"s back to the USSR as Russia tries to destroy Ukrainian identity on occupied territory Russia deports Ukrainian children to orphanage in occupied Crimea condemned as a ‘concentration camp’‘If I die, then only in my homeland’ — a resident of Izium refused to evacuate to RussiaUkrainian works of literature and history banned as ‘extremist’ in Russian occupied Luhansk oblast Russia opens new prison for Ukrainian political prisoners abducted from Kherson and Zaporizhzhia oblasts Crimean lecturer faces 5-year sentence for writing about Russia’s killing of innocent civilians in Ukraine 69-year-old Kharkiv region blogger tortured with electric shocks for answering his Russian captors in Ukrainian Russia abducts and imprisons Crimean Tatar, then tries to mobilize him for its war against Ukraine Ukraine orders deportation of ethnic Ukrainian facing persecution in Russia for opposing Putin and the war‘War on four paws’ — personal battle of Serhii NebohaUkrainian researcher savagely tortured for ‘confession to treason’ against Russian proxy ‘Donetsk republic’Children to undergo compulsory military training in both Russia and occupied Crimea Russia moves to legislate ‘impunity’ for all war crimes committed in occupied Ukraine Four Russian invaders sentenced to 11 years for torturing hostages in Kharkiv oblast Brutal torment of young Mariupol woman imprisoned at Olenivka ‘concentration camp’ and in Russia Moscow tries to justify its war crimes in Ukraine by glorifying its soldiers as ‘heroes of Russia’
• Topics / The right to liberty and security
• Topics / The right to health care 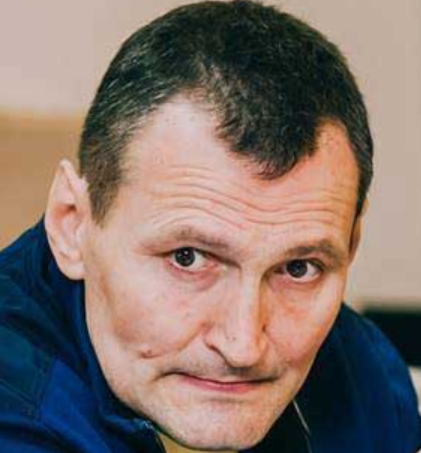 Ukrainian rights activist Andrey Yarovoi (Andriy Yarovyi] has become the laureate of the 2019 Carol and Travis Jenkins Award which is given to former or current drug-users who have made an outstanding contribution to reducing drug-related harm.  Yarovoi has paid a high price for his decade-long work in this field, as he was seized on a monitoring visit to the so-called ‘Luhansk people’s republic’ [‘LPR’] in August 2018 and has been imprisoned ever since.

The 51-year-old from Kyiv has himself been on opioid substitution therapy (OST) since 2009 and has worked over the last decade in human rights work.  He had been working since 2015 as a consultant for an HIV / AIDS prevention program run by the Ukrainian Alliance for Public Health, with one part of this work being to travel to the Russian proxy ‘Donetsk and Luhansk people’s republics’ where, in 2015, he spoke with residents about the discontinuation of their OST program.  This was to form the basis of the documentation ‘Donbas: Live or Die?’  The documentary suggests that the responsibility for the collapse of the OST program in occupied Donbas lies with both the Ukrainian authorities who refused to allow the OST drugs to be delivered to the ‘republics’, and to the so-called ‘LPR authorities’ who decided to give up the program.  Since Russia closed the program in Crimea following its invasion and annexation, and the ‘republics’ essentially always take the Russian example, it seems likely that the Ukrainian government’s refusal to deliver the drugs only precipitated, rather than causing, the problem.  Certainly, both Harm Reduction International (HRI) which gives the award, and, seemingly, the European Court of Human Rights appear aware of Russia’s critical role in any behaviour by the ‘republics’ leaders’.

Yarovoi had travelled to the ‘republics’ on several occasions before, however on 26 August 26, he was stopped at the checkpoint while trying to cross into LPR and the 38 Buprenorphine hydrochloride (OST) pills he was carrying seized. He had received these quite legally the day before at a clinic in Kyiv, however the so-called ‘LPR ministry of state security’ decided to claim that he was guilty of ‘large-scale drug trafficking’ over these pills which weighed all of 0.152 mg.  Yarovoi was only able to see a local lawyer whom the Alliance found for him in October 2018.

He has been imprisoned ever since, with the de facto Krasnodon City-District Court on 22 February reportedly having found him ‘guilty’ and passed “a long sentence” (details as to the specific length were not given).  The Alliance reported on 12 February that the European Court of Human Rights had initiated proceedings under Rule 39 (on interim measures) following an application from Yarovoi’s mother.  ECHR gave the matter priority status and demanded information from both the Russian and the Ukrainian Governments on measures taken to contact the people illegally holding Yarovoi. He has been added to the list of  Ukrainian hostages and prisoners of war whom the Ukrainian authorities are trying to get released / exchanged, however there have been no exchanges since 27 December 2017.  It was clear for at least the last six months that the Kremlin was so eager to get rid of Ukrainian President Petro Poroshenko that it would do nothing that could help him in the presidential elections.  It remains to be seen whether there will be progress once his successor takes office.  There are presently well over 100 Ukrainian hostages and POWs, some of whom have been in captivity for four years or more.

In awarding Yarovoi in his enforced absence at a ceremony on 28 April, an HRI spokesperson also stated that the award recognized Yarovoi’s “commitment, determination and resilience” and said that HRI wished also to “express our outrage at the Russian punitive law that criminalizes medicines deemed to be essential by the World Health Organization”.