Armed raids for statistics and terror in Russian-occupied Crimea 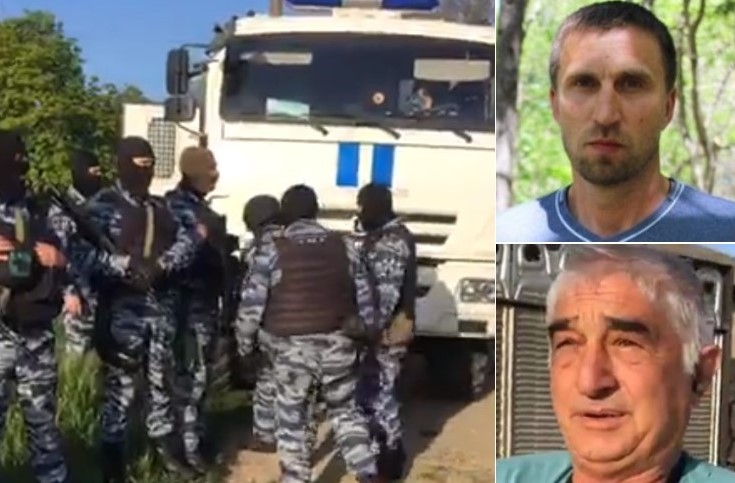 Brazen intrusions into Crimean Tatar homes by men with machine guns have become common in Russian-occupied Crimea, but there were some differences on 30 April.  The searches were even more desultory than normal, which was not  surprising since they were targeting Crimean Tatar activists and claimed to be looking for drugs which they knew in advance they would not find.  None, that is, which they had not brought themselves to plant which was doubtless one of the menacing messages that the raids were intended to leave.

The date may well have been critical in two ways.  The Russian-controlled enforcement officers could have needed to improve their statistics for the month.  A little bit of intimidation, no more, was needed, however, given that it was on the eve of two public holidays.

At around 6 a.m. large contingents of Russian enforcement officers turned up at the homes of Dilyaver Bekirov and Roman Osmanov.

Osmanov was likely ‘noticed’ by the occupation regime for his single-person picket in April 2018 in defence of the 16th century Khan’s Palace in Bakhchysarai, a place of enormous cultural and historical significance for Crimean Tatars which Russia is effectively destroying under the guise of ‘restoration work’.  This was, effectively, the message on Osmanov’s placard which read: “Stop destroying Crimean Tatar history under the pretence of restoration!”.   Osmanov has also actively shown support for political prisoners, attending ‘court’ hearings, etc.  He lives with his wife and two small children (the younger is only 6 months old) and his elderly mother.  She was taken ill during the raid and an ambulance needed to be called.

Osmanov notes that the order that they came with said that they were looking for drugs – at the home of a man who doesn’t drink or even smoke.  The ‘search’ was, he says, quite superficial, with the men not even bothering to open all drawers.  He is quite clear that this was an act of intimidation because of his civic activism.

Everything about the armed search can be viewed as a warning, including the fact that the officers illegally refused to allow Osmanov to call a lawyer and to choose the official witnesses.  In all these cases, the officers bring so-called ‘witnesses’ with them, making it particularly difficult to fight attempts to plant the items the men are supposedly looking for.

Armed searches were also carried out at the home first of Dilyaver Bekirov, a civic activist, and then of his son, Ruslan, who lives separately.  According to his father, Ruslan Bekirov is not involved in either political or civic activism.

He was then taken away, seemingly for blood tests, but released.  His lawyer, Emine Avamileva told Crimean Solidarity that the officers had refused to say what criminal proceedings were involved and what Ruslan Bekirov was suspected of.  Here, as with Osmanov, they also refused to allow the lawyer to see the protocol drawn up of the search.  Once again, this is grossly illegal and gives scope for falsification. Ruslan Bekirov has been told not to leave Simferopol, with this supposedly because the results of the tests are due on 5 May.

It is hard to take such suspicions seriously when the standard armed ‘operations’ were carried out of three homes on 30 April, with the targets in two cases being civic activists.  And when nothing at all was found.  Even the Russian occupation regime must understand that they cannot later produce a protocol, claiming that drugs were found, if they said nothing at the time, and refused to allow the men, or legal representatives to see these documents.

Russia’s armed searches of Crimean Tatar homes began within months of its invasion and annexation of Crimea, with civic activists particularly targeted.  Since October 2017, it has been using charges of ‘involvement’ in the peaceful pan-Islamist Hizb ut-Tahrir party, which is legal in Ukraine, to imprison activists from the civic initiative Crimean Solidarity for 10-20 years (or more).