Russian invaders demand Ukrainians have ‘filtration’ stamps and permits to live in their own cities"Death sentences’ of British & Moroccan POWs in occupied Donbas show clearly why Russia must be driven out of all of Ukraine Ukrainian medic seized and held captive in Russia for helping evacuate the wounded from Mariupol Russian soldiers given long sentences in Ukraine for bombing civilian targets in Kharkiv oblast Russia extends terror and abductions from occupied Crimea and Donbas to all of Ukraine Russia uses abducted Ukrainians for propaganda video claiming Ukraine is bombing ‘liberated’ MelitopolProhibited remembrance of Crimean Tatar genocide and mounting terror in Russian occupied Crimea Even in Russia, Putin’s ‘denazification’ claims prove no excuse for war against UkraineRussia uses terror and abduction in attempt to force schools to collaborate in occupied Melitopol Russian invaders fire on evacuation buses, abduct driver for propaganda video At least 50 Ukrainians were burned to death in Russia’s bombing of Mariupol hospitals Kherson journalist kidnapped by Russian invaders after reporting their violent suppression of a peaceful protest Russian FSB produce ‘refugee’ propaganda video blaming Ukrainian soldiers for Russia"s war crimes in Mariupol Russia resorts to terror and arrests to crush pro-Ukraine resistance in Enerhodar Russian Rule of Lawlessness in Occupied Crimea and Donbas‘International institutions must protect Ukrainians from abductions and executions’, Ukrainian SCOsRussia has already greatly surpassed the Nazi Third Reich by insidiously launching missile and bomb attacks on UkraineSOS! Save the civilian population in Bucha, Irpin, Hostomel!Russia is forcing Ukrainians from occupied Crimea and Donbas to fight in its invasion of Ukraine Chief Rabbi of Ukraine demolishes Putin’s excuse for Russia’s invasion
• Topics / The right to liberty and security 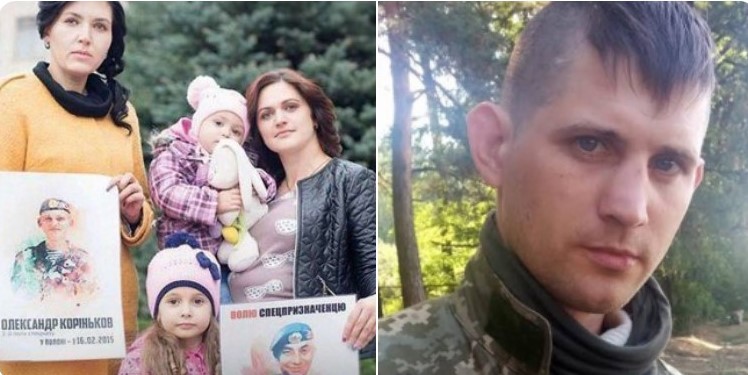 It is over four years since three Ukrainian military men were taken prisoner in the so-called ‘Donetsk people’s republic’ [DPR], with two of the men seized during one of the battles which Russia deployed significant forces to win.  It is clear that Moscow plays a major role in any exchanges of prisoners in occupied Donbas, and the fact that the three men were not included in the last exchange in December 2017 suggests that their military status is seen as raising their ‘value’.   Whether this is for particularly hard bargaining or for a separate high-profile release as part of Russia’s efforts to influence the  parliamentary elections this autumn remains to be seen.

There seems every reason for viewing these two professional spetsnaz [special forces] officers from Kropyvnytsky as Russian prisoners of war, and not only because of Russia’s control over ‘DPR’.  The two men were captured during the siege of Debaltseve on 16 February 2015, four days after a supposed ceasefire agreed by Russian President Vladimir Putin in Minsk.

Debaltseve is a strategic railway hub which was under Ukrainian government control on 12 February 2015 when Putin agreed a ceasefire with the leaders of Ukraine, France and Germany in Minsk.  Within hours of this supposed ‘ceasefire’, DPR ‘leader’ Alexander Zakharchenko and a chief commander Edward Basurin had both announced that they would not observe it with respect to Debaltseve. In Basurin’s words: “Of course we can open fire (on Debaltseve). It is our territory. The territory is internal: ours.”

Such ‘logic’ makes a farce of any ceasefire, however it was almost certainly Putin who began the deceit.  Investigative journalists from the Conflict Intelligence Team have produced evidence suggesting very direct Russian military involvement in the battle and, in fact, suggest that it was Putin who ordered the offensive.  It was also Putin who gave a state award to Alexander Minakov for “services to the Fatherland’ almost certainly for his role at Debaltseve.  In his briefing paper Russian Forces in Ukraine, published in February 2015, Dr Igor Sutyagin listed a substantial number of Russian forces involved in the February battles.  He writes that “the overall figure of Russian troops operating in eastern Ukraine reached approximately 9,000 by the last week of February 2015”.  Sources within Russia were scarcely trying to hide the fact of Russian involvement. Ilya Barabanov, writing for Kommersant, paid lip service to the claim that contract soldiers fighting in Donbas had ‘taken leave’ to do so, however made it abundantly clear how absurd such assertions were.

On 16 February 2015, Glondar and Korinkov were accompanying seven other Ukrainian soldiers.  They were fired at, with two men killed and two seriously injured. The wounded men were soon released by the militants.  Another two were handed over after 50 days, and one managed to escape.

Glondar and Korinkov have been imprisoned ever since, with Glondar never having seen his second daughter.  His wife, Yekaterina, learned that she was pregnant the day that her husband was taken prisoner.

Pantyushenko (nom de guerre Bronya, or armour] is a tank commander from the First Tank Brigade, and has been in captivity even longer, since 18 January 2015.

Viktoria Pantyushenko received a call the evening her husband was taken prisoner from the ‘Don Cossacks’, but then heard nothing for two months.  It was therefore a relief when, in March 2015, a Russian resource published an article in which she learned that her husband was held by the so-called Cossack chieftain of the Don Cossack Host, Yuri Safonenko.  She has had virtually no contact, even by letter, with her husband, and much of the information has come from Ivan Lyasa, who was held prisoner with him and then released in the exchange on 27 December 2017.  According to Lyasa, during the first three months, the men were brutally beaten and tortured by Safonenko’s ‘Don Cossacks’, only being moved to the seized SBU [Security Service] building in April that year.

These three men have been in captivity the longest, but there are at least 13 military men held prisoner by the so-called ‘Donetsk or Luhansk people’s republics’.  There are also over 100 civilian hostages, although with respect to civilians, this figure could easily be much higher since people are often afraid to report the disappearance of a family member for fear that publicity could put the person in more danger.