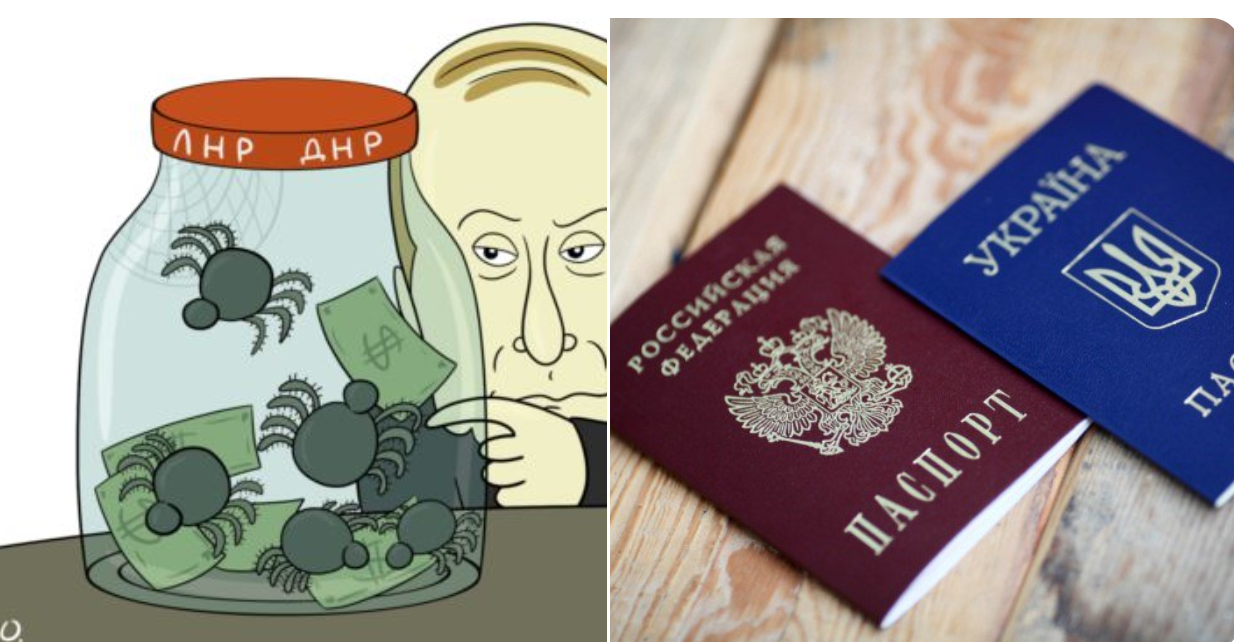 Plans have been reported to deprive any Ukrainians living in occupied Donbas of their pensions or social benefits if they take Russian citizenship.  The move may be an understandable reaction to Russia’s new act of aggression in offering its citizenship to Ukrainians in the so-called ‘Donetsk and Luhansk people’s republics’ [‘DPR’, ‘LPR’], but it is one that would be of very questionable legality.  It would also make reintegration of the occupied territory into government-controlled Ukraine even harder.

Iryna Friz, Ukraine’s Minister on Veteran Matters, announced on 8 May that the Cabinet of Ministers has passed a decision, declaring any passports issued by Russia after 28 April 2019 (to Ukrainians) invalid.  This is in connection with Russian President Vladimir Putin’s decree on 24 April making it easy for people in the Russian proxy ‘Donetsk and Luhansk people’s republics’ to receive Russian citizenship. “That action by Russia against Ukraine is in violation of the principles and norms of international law and is a direct risk to our country’s state sovereignty and territorial integrity”, Friz wrote.  The decision, drawn up by the Minister on Occupied Territory Vadim Chernysh, is in line with the Ministry of Foreign Affairs statement on news of the decree.  This pointed out that such illegal issue of Russian citizenship would be legally meaningless and have no legal consequences, with no such citizenship being recognized by Ukraine.

If this is uncontroversial, not so Friz’ statement that the Cabinet of Ministers is working on proposals to add Ukrainians who receive Russian citizenship in this way to a database of people denied Ukrainian social payments and pensions.

As reported, this was one of the possible reactions proposed after the decree was issued, with threats also heard that Donbas residents who took Russian passports would be stripped of their Ukrainian citizenship. The proposals fail to take into account several factors.

The first is that, as with occupied Crimea, it may prove impossible to determine whether people voluntarily took on the supposed Russian citizenship. Russia has already made it clear that any Ukrainians receiving such ‘citizenship’ will not be entitled to any Russian benefits unless they go to live in Russia.  This in turn is likely to be very difficult as finding a place to live is not at all easy, and that would only be the first of many hurdles. It is, on the other hand, advantageous for Russia to show apparently huge queues of people waiting to ‘become Russian’, and there would be no guarantee that the people in those queues were there of their own free will.

There are doubtless other legal issues with such a measure, which might well be found to be unconstitutional. The government would also be contradicting itself, since its stated position is that these passports will be invalid and have no legal consequences. How, in that case, would it be possible to use their obtainment as grounds for depriving a person of his or her rights as a Ukrainian citizen?

Vitaly Sizov, an analyst for the Donetsk Institute of Information, is quite clear of the implications of Putin’s action.  Russia has entered Donbas over various stages since 2014, he writes, and with this decree it has finally openly registered its presence.  He notes that Russia has consistently restricted Ukrainian presence in Donbas and has filled the resulting vacuum of power and state institutions.  Russia first took the spheres of education and medicine under its partial control, and then, from 2017, the economy and also the civic sphere through its recognition of documents issued by the two proxy ‘republics’.

Russia has used indecisive actions by the Ukrainian government as justification for its actions in swallowing up Ukrainian territory, Sizov says.  “The Russian authorities have used problems with receiving Ukrainian social benefits to justify its financial support for its own de facto administrations in Donbas which go by the name of ‘DPR’ and ‘LPR’.”, Even Russia’s seizure of the main industrial enterprises of Donbas was claimed to be because of the ‘civic blockade’ of railway lines begun by certain Ukrainian political forces and movements in 2017.

All of the above would undoubtedly be denied by Russia, and affirmed by those in Ukraine and abroad who have been watching from Sizov calls Russia’s “creeping seizure of Ukrainian territory”.

The anger, frustration and other strong emotions that this elicits will not help take a correct decision, Sizov warns.  Reaction to the offer of Russian passports alone is not enough when this is the consequence of a whole chain of events.  There needs to be a clear policy for retaining ties with the territory now not under Ukrainian control, as any vacuum will be filled.

There are limits to what Ukraine can achieve without military actions, however he believes there needs to at least be parity with Russia in terms of media and the social sphere.  People living in occupying territory should still have access to Ukrainian media and to social services on territory under Ukrainian government control.

The Ukrainian government’s scope for action may be limited, but, Sizov believes, there are steps it could take now to ensure that Ukrainian citizens do not become isolated within the Russian cultural, economic and political spheres.

Increase the number of checkpoints between occupied and Ukrainian government-controlled territories and improve their work, especially in the Luhansk oblast;

Simplify the procedure for receiving pension and other social payments for people living in non-government-controlled territory;

Review the list of goods and amounts which can be transported across demarcation lines;

“Even the above simple steps which do not demand huge effort will be more convincing for local residents than the latest series of threats”.

There are already a lot of children in the proxy ‘republics’ who can scarcely remember life under Ukrainian government control, and who are subjected to an unending barrage of anti-Ukrainian, pro-Russian propaganda.  There are also well over a million pensioners who, in the majority of cases, would have remained in Donbas not out of ideological support for Russia’s proxy ‘republics’, but because they had nowhere to go.  There are a huge number of reasons why people remained.  If the Ukrainian authorities distance themselves even further from these people, Sizov is surely right in warning that the vacuum will be filled by Russia, making the end to its effective occupation frighteningly  remote.