Ukrainian rights activist held prisoner in Russian proxy Donbas ‘republic’ receives international awardRussia reserves housing and warmth for its military and collaborators in devastated Mariupol‘Vote to join Russia’ or armed soldiers will come for youSilence abets Russia in torturing and risking the lives of Ukrainian hostages and POWs in occupied DonbasCourt in Ukraine freezes all of former President Poroshenko’s assets over ‘treason’ charges A brief description of the KHPG strategic litigations in the first half of 2021Mother of slain journalist Pavel Sheremet: I don’t want innocent people to suffer for his murder Prisoners’ rights in Ukraine 2014-2021: KHPG reportRussian proxy Donetsk ‘republic’ formalize plunder of Ukrainians’ property Tortured for Tweets Shevchenko and Russia’s first Ukrainian political prisoner in occupied Crimea Russian proxy Donetsk ‘republic’ moves to plunder Ukrainians who don"t take its ‘citizenship’A brief description of the KHPG strategic litigations in July–December 2020Criminal proceedings under Article 111 of CC of Ukraine against the journalistsA brief description of the KHPG strategic litigations in January – June 2020Putin hands out flats to turncoats who betrayed Ukraine in Russian-occupied CrimeaA brief description of KHPG strategic litigations in July–December 2019Russian-controlled Donbas militants finally free severely disabled pensioner but not her invalid sonRussia continues its revenge on Maidan activists, while giving shelter to Berkut suspected killersCrimea behind barbed wire: Russia militarizes beaches in occupied Sevastopol
• Topics / Social and economic rights 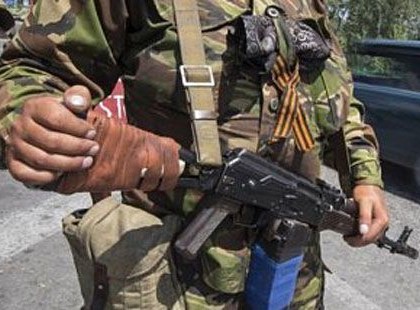 The so-called ‘Donetsk people’s republic’ [‘DPR’] are stealing apartments in Donbas and claiming this to be legal because the property owners did not respond to their ‘summons’.  In many of the cases, the apartments are owned by Ukrainians who left occupied territory and who would be in danger of imprisonment (or worse) if they returned.

Over one and a half million Ukrainians are known to have left their homes because of Russia’s annexation of Crimea and the Russian armed and controlled war in Donbas.  For most of these ‘internally displaced persons’ [IDP], life is very difficult and many would sell their homes in occupied territory if they could.  The prices, however, are pitifully low, the chances of getting cheated and losing everything – high.  For some there is also concern as to how this would be viewed by the Ukrainian authorities when the occupation is over

Online Debaltsevo has posted of a ‘court summons’ effectively used to deprive members of a family of their flat.  The summons, signed by Olena Kirichenko, orders them to appear at a ‘court hearing’ on 25 April, providing grounds as to why they should not be stripped of the right to the property, because they have not lived in it ‘without good grounds’ for the past six months.  This document ends with the words that through its posting, the family members are deemed to have been informed.

If they don’t turn up, their property is ‘confiscated’.  While it is not known why the particular people named left Snizhne in the Donetsk oblast, we do know of several Ukrainians who have been seized, tortured and imprisoned on their return.  Volodymyr Fomichov, for example, was just 23 when he tried to visit his family in Makiyivka for the New Year – Christmas holidays in January 2016.  He was tortured, and then ‘sentenced’ to two years’ imprisonment, with it claimed that he had been bringing two grenades into ‘DPR’.  These may have been the same two grenades that the ‘DPR ministry of state security’ are supposed to have ‘found’ on a bookshelf when they carried out a raid of internationally renowned religious specialist, Ihor Kozlovskyy.  He was also seized and imprisoned.  Both Kozlovskyy and Fomichov were released as part of the last exchange in December 2017.  Others either remain incarcerated, or have been seized and taken prisoner since, including Andriy Yarovoi, who was awarded an international prize in April 2019, one that needed to be collected for him by colleagues.

The so-called Luhansk and Donets ‘republics’ are known to be holding over 100 hostages, however the real figure could be much higher since many relatives are afraid of reporting a person’s seizure for fear of making things worse.  There also needs to be a high level of secrecy as to how information was obtained in order to protect sources who would certainly be in danger if exposed.

Dzerkalo Tyzhnya clearly believes that there have already been a number of such ‘court rulings’ which take people’s property from them.  The newspaper that, as a rule, flats are taken from those people who cannot enter occupied territory because of their ideological position or activities in government-controlled Ukraine. These are not isolated incidents, they say.  In the case of the four people cited in the Snizhne ‘ruling’, this proved to be the family of a law enforcement officer who remains in service on government-controlled territory, this meaning that he or family members would be in danger if they returned.  The family reacted calmly to the news that their home had been seized, saying that on their return after Snizhne is liberated, they will throw out those who moved into it illegally.

Radio Svoboda’s Donbas.Realii d the appropriation of two flats in the centre of Donetsk back in August 2018, with 10 others in that same apartment block having been ‘confiscated’ earlier, in March.  The block in question, Kirylo Sazonov, a political analyst from Donetsk explained, had been built recently for the top management of the police.  It was therefore safe to assume that the new ‘official’ method of appropriation would work since the flat owners would not react to ‘summonses’.

In fact, however, militants from the so-called DPR and ‘Luhansk people’s republic’ [LPR] began seizing the thousands of flats and homes which their owners were forced to abandon from 2014.

‘LPR’ that they were taking ‘control’ of empty flats back in 2017, with the militants beginning to carry out ‘inventories’.  If the flat was declared empty, they would dispose of it as they saw fit, with analysts assuming that many of the flats would be used to house people from Russia.