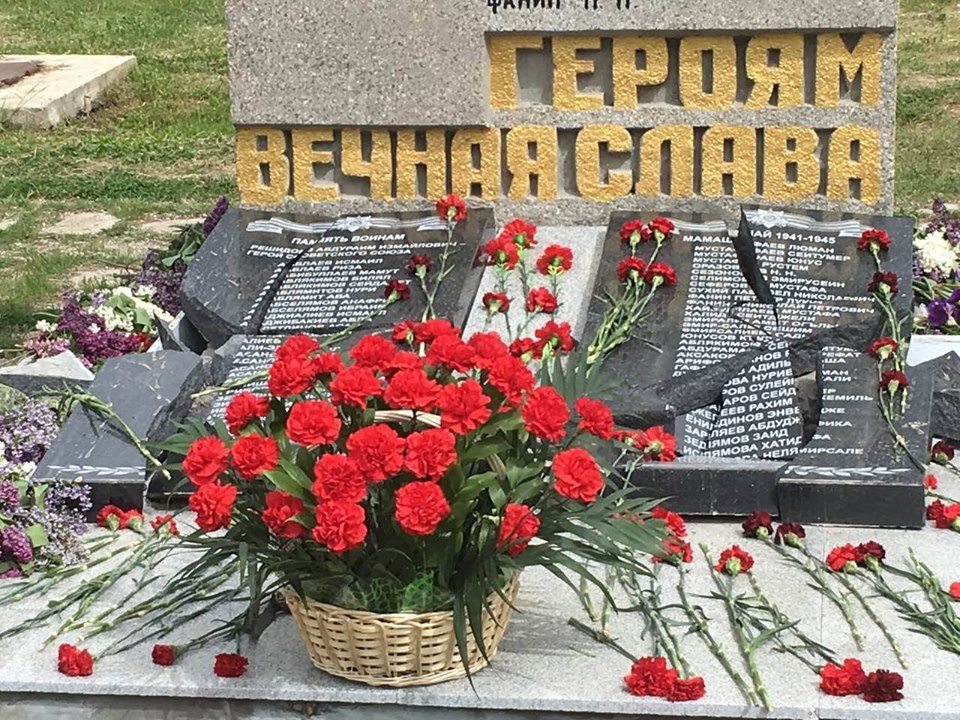 ‘Vandals’ in Russian-occupied Crimea have totally destroyed a monument to Crimean Tatars killed in battle during World War II, as well as to those who returned from fighting in the Soviet Army only to be treated as enemies and deported.  That this monstrous act of disrespect was carried out in the early hours of 9 May, or Victory Day, was almost certainly no accident. Among the many weapons applied against Crimean Tatars for their peaceful opposition to Russian occupation has been the resurrection of old lies, and the monument directly refuted one of the most cynical distortions of historical truth.

The granite  monument in the village of Mamashai (renamed Orlovka after the Deportation) near Sevastopol, was deliberately smashed into many pieces, with this very clearly no act of drunken vandalism.

Refat Chubarov, Head of the Mejlis, or representative assembly, of the Crimean Tatar People, explains that the original monument dates back to the 1960s, however there were only the names of six men killed in action, with none of these Crimean Tatar.  This was despite the fact that before the 1944 Deportation, virtually the entire village was made up of Crimean Tatars, including the many who had been killed in action or who were still away fighting in the Soviet Army.

At that time, Crimean Tatars were still being prevented from returning to their homeland, and Stalin’s lies about widespread collaboration, used as excuse for the 1944 act of genocide, were only formally refuted in 1967.

The full monument had only just been unveiled on 6 May.  It was made out of granite stones, with the names engraved of 57 Crimean Tatars from the village who had either died fighting, or who had returned from the War only to be sent into the horrific conditions of exile.  The work had been carried out by the descendants of the men and fellow villagers, with the details about each of the men having been painstakingly verified.

All of this was completed in time for Victory Day on 9 May, as well as for the 75th anniversary of the Deportation on 18 May, to honour the Crimean Tatar soldiers’ memory.

Within three days it had been destroyed, smashed on a day which, at least in theory, is dedicated to honouring the memory of all who fought against the Nazi occupiers and all who were killed.

In fact, what Victory Day has been turned into under Russian President Vladimir Putin, including in Crimea under Russian occupation, is a jamboree of crass militarism, rather than remembrance, with children dressed in military uniforms and carrying rifles and rampant glorification of war.

Russia is also increasingly reinstating old lies, including about Crimean Tatars, with these recently even published in a school history textbook for the 10th grade.  There was such outrage over the brazen distortion of historical truth that the occupation regime did promise to withdraw and edit the book.  It remains to be seen whether it keeps its word.

Chubarov is in no doubt that Russia under Putin has set the occupation regime “an updated paradigm of hatred” in which there can be no place for actions which threaten myths about Crimean Tatars that Moscow has been inculcating for decades.

It was one of these toxic myths that the monument to Crimean Tatar war heroes undermined.

“Putin and his people in occupied Crimea need only a population that is loyal to the occupiers, and which hates Crimean Tatars, the indigenous people of Crimea.  The main vandal and the main criminal is, therefore, Putin”, Chubarov concludes. “They could not fail to destroy a monument that totally refuted their myths and challenged their monopoly on victory”.

Said Ismagilov, Mufti of the Spiritual Directorate of Muslims of Ukraine, shared the photos of destruction, saying that they show “the whole truth about the attitude in Russia to remembering the fallen in the Second World War.”