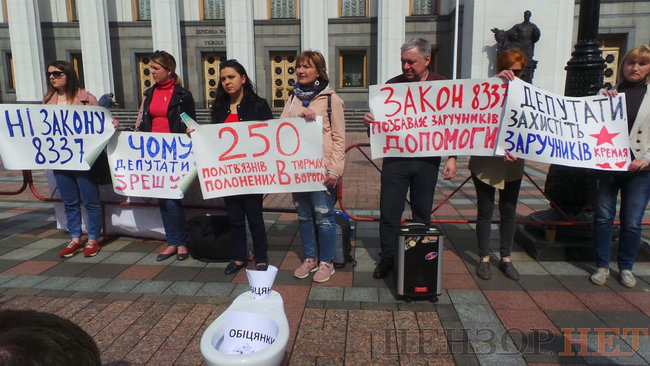 After two years of empty assurances about support for the Kremlin’s Ukrainian hostages and POWs, Ukraine’s lawmakers could be on the point of passing a bill that gives the Security Service unwarranted power to determine who counts as a hostage, while not helping any of the ever-increasing number of political prisoners held in occupied Crimea and Russia. Small wonder that relatives of the political prisoners who gathered in protest outside the Verkhovna Rada on 13 May had a toilet into which they flushed MPs’  promises of support for a proper draft law with real mechanisms for helping the hostages.

Over the past two years, five draft bills were drawn up, with two having been tabled in parliament.  The authors of draft bill No. 8205 include people directly involved in efforts to secure the release of political prisoners and the families of political prisoners and human rights activists are convinced that this bill should be adopted in its first reading.  While this bill has, however, been gathering dust in parliament, another, No. 8337, has just been added to the parliamentary agenda.

Everything about No. 8377 is of concern, including the fact that apparent measures to provide social benefits to hostages have been prepared as amendments to the Law on Fighting Terrorism.  In an appeal to MPs to reject the bill, the families of hostages and human rights NGOs call it “a populist bill which only imitates defence of all categories of the Kremlin’s hostages, while in fact protecting neither political prisoners, nor prisoners of war, nor civilians, and also not defending their families over the entire period of the Kremlin’s illegal imprisonment of Ukrainian citizens”.

While purporting to resolve the problems which the families of prisoners face, the bill could deprive them of fundamental state support, while not solving any of the issues they now face.

Draft bill No. 8377 does not even make sense, since the designation of the war in Donbas as an anti-terrorist operation’ [ATO] ended back in February 2018.  What this would mean in practice, the authors of the appeal believe, is that social protection for the many political prisoners held in occupied Crimea and Russia would still be in question.  Very many of the political prisoners, like Oleg Sentsov, Emir-Usein Kuku, Seiran Saliev, Nariman Memedeminov, have families who also need support.  Russia is also illegally imprisoning people far from their homes in Crimea, with the cost of visiting the men also prohibitive for most of the families.

The fact that the Security Service [SBU] would be given the authority to determine who falls under the law is also unacceptable.  Such powers clash with Ukrainian legislation, including the Law on the SBU, as well as with international norms.  As if this were not bad enough, there are also norms within the draft bill which contradict each other.

In addition, there are insultingly absurd provisions, such as the one which envisages a person seeking the official certification and the aid to which this would entitle them “according to their place of registration”. Most of the people illegally imprisoned are registered in areas under occupation.

The truly incredible part of this bill was pointed out back in 2018, and it defies belief that it could have still been placed on the agenda in this form.  According to this draft law,  prisoners or hostages would receive assistance only after their release. This means that neither they, nor their families would receive help when they most need it.

Other problems have also long been noted.  The definition of hostages within the bill is so broad and unclear that it could lead to a situation whereby the mere fact of being imprisoned on occupied territory would be sufficient.  This would be a major burden on public funding, while all the other problems within the law might still lead to people the law should be helping remaining without assistance.

The authors of the appeal call on lawmakers to consider the urgent appeal of families of the imprisoned men and withdraw this bill from the agenda, and to vote against it, if this does not happen. They ask that draft law No. 8205 be adopted in its first reading. That bill sets out a list of guarantees for hostages on occupied territory or in Russia, and although the bill needs some important amendments, it does have the support both of families of the prisoners and rights NGOs.

There are well over 100 civilian hostages and prisoners of war held in occupied Donbas.  As well as the 24 prisoners of war whom Russia seized on 25 November 2018, there are also well over 80 political prisoners in occupied Crimea or Russia.  Of the 55 men imprisoned on charges of alleged involvement in the peaceful Hizb ut-Tahrir party which is legal in Ukraine, most have small children.  In many cases, the imprisoned men were also looking after elderly parents. The need for real measures is therefore urgent and the failure to provide them up till now deeply frustrating.