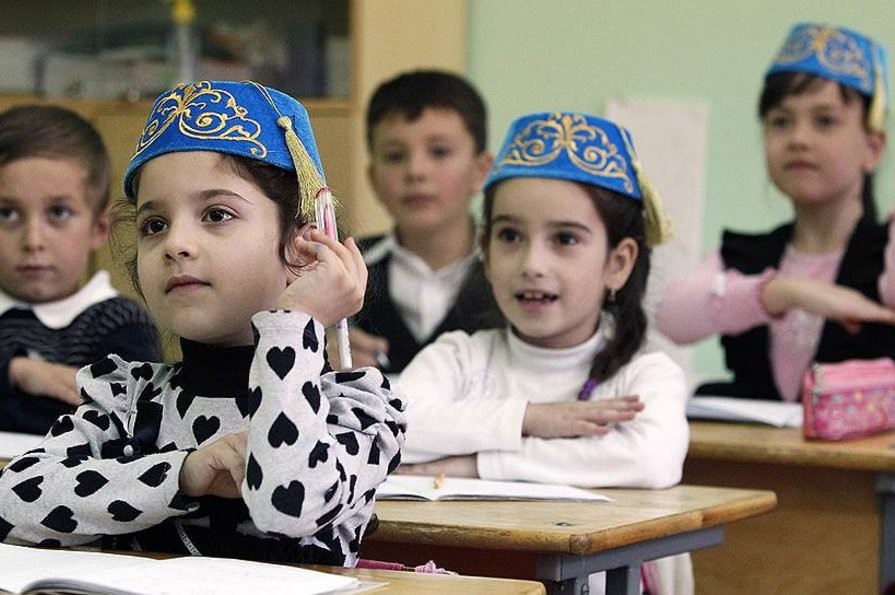 Both enforcement bodies and school heads are being used in Russian-occupied Crimea to ‘dissuade’ children and their parents from asserting their full right to insist on education in the Crimean Tatar language.  The methods, which range from pressure to downright threats, have already been used to effectively close all Ukrainian language classes in Crimea.

Prominent Crimean Tatar public figure, Nariman Dzhelyal reported on 10 May that the beginning of their information campaign to help parents and children assert their right to education in their native language had had to be postponed indefinitely.  The campaign, entitled ‘Bilgi kervanı’, or ‘Caravan of Knowledge’, was supposed to begin in the town of Zuya, with a meeting aimed at showing parents how to fill in applications for their children to study in Crimean Tatar. It was cancelled at the last minute after the owner of the place where the event was to take place received a call from the enforcement bodies, ‘recommending’ that he refuse to provide his venue and threatening him with problems if he did not heed the ‘recommendation’.

Details have been reported of yet another school  in Simferopol where the head has put parents who asked for their children to study Crimean Tatar under enormous pressure.  Given Russia’s effective silencing of any independent media and arrests of civic activists, it is difficult to verify the information, but the methods are familiar.  The Head of School No. 8, Olga Hutyanko reportedly summoned each parent who made such an application into her office.  She told them that the children could not study their native language as it is not part of the education level for grades 1-4 and 5-9. In several cases, she said that the children should study Crimean Tatar at home.   The point of such methods is clear.  Russia has claimed that neither Crimean Tatar nor Ukrainian are at risk in occupied Crimea, but clearly does not want to see them studied. On the one hand, they prevent educational measures which would  inform parents of their rights and how to assert them, and on the other, they use school heads to intimidate parents into themselves ‘agreeing’ that their children be only able to study their native language or study in it at home.

It is just over two years since the UN’s International Court of Justice accepted that there was a prima face case against Russia over violation of the International Convention on the Elimination of All Forms of Racial Discrimination against Crimean Tatars and ethnic Ukrainians in occupied Crimea.  The Court imposed preventative measures, as asked by Ukraine, and ordered that Russia withdraw its ban on the Mejlis (representative assembly) of the Crimean Tatar people, and that it ““ensure the availability of education in the Ukrainian language” in occupied Crimea.

Russia has flouted both these orders.  There is now not even one school in Crimea teaching all subjects in Ukrainian.  A monitoring study by the Crimean Human Rights Group  recently demonstrated that the statistics provided by the Russian occupiers, do not reflect the true seriousness of the situation.

The situation with Ukrainian is even worse.  School No. 20 in Feodosia which was supposed to be a school with teaching in Ukrainian is, according to parents, now taught solely in Russian.  Ukrainian Language as a separate subject is only taught in some classes.