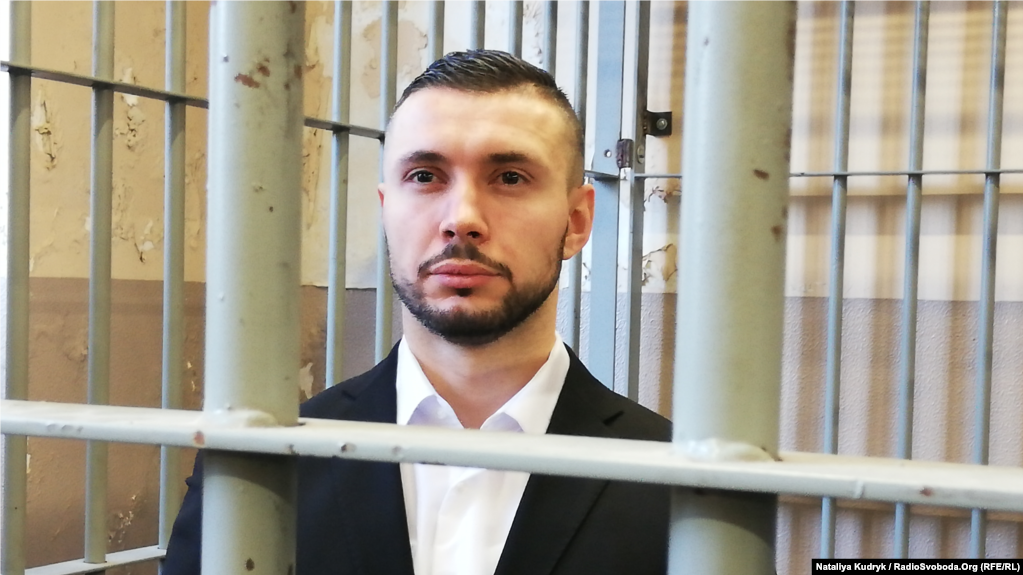 The trial is coming to an end in Pavia, Italy of Vitaliy Markiv, a young man with dual Ukrainian and Italian citizenship, who is accused of ‘involvement’ in the death by shelling of 30-year-old Italian photojournalist, Andrea Rocchell.  The latter was killed, together with his Russian interpreter (and rights activist) Andrei Mironov, on 24 May 2014 during the first months of the war in Donbas. Markiv was then serving in Ukraine’s National Guard which Italy is trying to claim was an ‘illegal armed formation’.  This bizarre assertion is only one of several concerns about a case which seems disturbingly similar to the ‘trial’ in Russia of Ukrainian military pilot Nadiya Savchenko in 2016. Since Savchenko was internationally recognized as a political prisoner, there seem compelling grounds for probing the charges against Markiv in Italy.

On 17 May, during the 13th hearing in a trial that began in July 2018, five National Guard soldiers, who had served in Donbas, together with Markiv, gave testimony. In the course of eight hours of questioning, the men confirmed that neither Markiv, nor his unit, had had any access to heavy artillery. This is of vital importance since Rocchelli and Mironov were killed in mortar shelling near Sloviansk.  The National Guard men also stated that from their position on Mount Karachun, they could not see the Zeus Ceramics factory which Rocchelli and Mironov were near when hit.  Nor, they said, would their Kalashnikov rifles have been capable of hitting anything almost two kilometres away.  Ukraine’s National Guard is part of the Interior Ministry, and the men came as part of a delegation led by the Interior Minister Arsen Avakov.

This was criticized by local Italian journalists who asserted that the presence of such a high-ranking delegation from Ukraine was an effort to influence the Italian court.  Avakov rejected this accusation, saying that they were there to defend a Ukrainian soldier and present evidence to convince the jury that Markiv had not committed any murder.

While Avakov’s presence may not have helped the defence, it was certainly of critical importance that a high-ranking member of the Ministry, Lieutenant General Mykola Balan informed the court that the National Guard, like Italy’s Carabinieri, is a legal armed formation empowered to protect public control.  He thus directly refuted the key assertion by Italy’s prosecutor that the National Guard was an illegal paramilitary structure. Balan also confirmed that from May to June 2014, the National Guard had not had any heavy artillery, like the mortar fire which killed Rocchelli.

Prosecutor and lawyers for the civilian plaintiffs asked how the National Guard men had communicated with the Ukrainian Armed Force soldiers who were on Mount Karachun and who did have mortar fire. Oleksandr Bendyuk, one of the former commanders answered that they had had no contact with them.

Markiv is represented by a well-known Italian lawyer, Raffaele Della Valle, who has previously spoken of the absurdity of the charges.  He believes the verdict could be reached by the end of June.

Markiv was still serving in the National Guard when he was arrested at an Italian airport on 30 June 2017. He has been in custody ever since, although the initial charge of murder was changed to the much more vague ‘involvement’ in Rocchelli’s killing before the trial began.

As well as the criminal charges,  Markiv is facing a civil suit brought by the National Federation of the Italian Press,  the Lombard Association of Journalists and Cesura.Lab. The latter have also, reportedly, lodged a civic suit against the Ukrainian state over Rocchelli’s death.

After dropping direct murder charges, presumably because Markiv’s National Guard unit had no access to mortar fire, the prosecution had alleged that Markiv gave information to the Ukrainian Army about the presence in the area of Rocchelli and Mironov.   The implication would seem to be that, if the Italian prosecutor had the chance, it would charge the Ukrainian army with Rocchelli’s ‘murder’.  This is despite the fact that there was mortar shelling by both the Ukrainian Armed Forces and the Russian/pro-Russian militants.  The latter, under Igor Girkin, who until 2013 served as a Russian military intelligence officer, had seized Sloviansk in April 2014.

It seems that neither of the men had had official accreditation and were not wearing clothes identifying them as members of the press. Quite the contrary, since Mironov was in camouflage trousers.

It is difficult to understand on what grounds the prosecution is even suggesting that the men were deliberately targeted, or why it is assumed that this was by the Ukrainian Armed Forces.  The prosecutor has refused to cooperate with the Ukrainian authorities, blaming them for lack of progress in investigating Rocchelli’s death.  The Interior Ministry, in turn, rejects such criticism, pointing to the fact that the men were killed in the middle of a war zone, and asserting that the military action needs to end before they can establish who was to blame.

One of the strangest parts of the Italian prosecutor’s case is the effective denial that there was a war waging, with the prosecutor arguing that even the Ukrainian government called it an ‘anti-terrorist operation’ [‘ATO’]. The attempt to deny Markiv any official status in Donbas is part of this same line of argument. There was long controversy over the Ukrainian government’s insistence of retaining the term ATO, however it is probably true that, given the degradation of the military under ex-President Viktor Yanukovych, in April and May 2014, Ukraine was in no position to do much else.  This does not change the fact that this was a military conflict, and does not turn tragic deaths in a war zone into ‘murder’.

The witnesses for the prosecution include five journalists. William Roguelon, the French journalist who survived, together with the taxi driver, has given fairly conflicting accounts since the events. His reasons for assuming that the firing was from the Ukrainian side appear to be highly subjective, and may well be linked to support for the militants.  Importantly, he does himself acknowledge that he did not see who was firing.  During their questioning in December 2018, the other journalists reportedly acknowledged that they do not have direct proof of Markiv’s involvement in Rocchelli’s death.  These journalists included Ilaria Morani, whose article on 25 May 2014, appears to have led to Markiv’s arrest.   This wrongly identifies Markiv as a captain of the Ukrainian Armed Forces and quotes him as warning them to stay clear of the military zone.  He supposedly goes on to say: “We don’t usually shoot in the direction of the city or civilians, however where we see movement, we load heavy artillery. This is what happened to the car with the journalists and the interpreter. We shoot from here within a kilometre and a half. There is no clearly delineated front here.  It is not a war like Libya. There are actions scattered throughout the city, we await only the green light for the final attack "

As mentioned, Markiv himself did not have access to such artillery, and the actual recording of this telephone conversation was not kept. There were also discrepancies between the testimony of Morani and her colleague, Marcello Fauci, who had actually spoken with Markiv, as to when the telephone conversation took place, in which language and as to whether Rocchelli’s death had been mentioned.  Even if the words were correctly quoted, and this cannot be proven, it is hard to understand why they are seen as so incriminating give the context of a military conflict, when movement could very easily mean that if you don’t shoot first, you will be killed.  The taxi in which the journalists were driving was not in any way identified as being a press vehicle, and the Italian government had warned people not to travel to the area.

The words certainly do not suggest the kind of premeditated attack on a civilian target that Markiv is now charged with.

It may well be accident, but the similarity to the trial of a then Ukrainian military pilot, Nadiya Savchenko is disturbing.  She was captured by Kremlin-backed militants in the Luhansk oblast in Ukraine on 17 June 2014 and taken against her will to Russia.  With Russia denying any direct involvement in the war in Donbas, that ‘detail’ needed to be covered up, and Russia accordingly claimed that Savchenko had escaped from the militants, and hurtled to the Russian border to cross it “illegally”. She was then ‘tried’ in Russia for supposedly complicity in the death of two Russian journalists who were killed in mortar fire on June 17, 2014.  As with the death of Rocchelli and Mironov, there was no evidence at all that Igor Kornelyuk and Anton Voloshin had been deliberately targeted.  They too had not been wearing bulletproof vests, etc,, and had been in an area of intense military conflict, yet Russia immediately began a major propaganda campaign to try to blame Ukraine for a premeditated attack on its journalists.

The prosecution claimed that Savchenko, with a serious arm injury, had climbed up a television tower and, at a distance of around 2.5 kilometres had ‘noticed’ the journalists and informed members of the Aidar volunteer battalion of their location.  Neither the binoculars nor the radio system that the prosecution alleged were used to do this were ever produced.  The ‘court’ simply ignored the defence’s presentation of mobile  telephone records and witness reports which demonstrated that Savchenko had not been anywhere near this TV tower, even assuming that the latter could have been used for the impugned action.

Savchenko’s imprisonment and eventual 22-year sentence were internationally condemned, with all international bodies and democratic states demanding her release. She was later exchanged for two Russian military intelligence officers caught while involved in a fatal attack on Ukrainian soldiers in a country with which Russia pretends to not be at war.

Markiv’s trial is coming to an end, with the prosecutor expected to give his address to the court on 24 May, with the lawyers for the civil plaintiffs due to speak on 14 June, and the defence on 21 June.