Ukrainian MPs seem ready to abandon Kremlin hostagesWorrying secrecy around allocation of aid to Ukrainian political prisoners in Russia & occupied CrimeaUkraine to provide support to families of political prisoners held in Russia and CrimeaRussia abducts, tortures and imprisons Ukrainians. And Ukraine?Number of Ukrainian political prisoners in Russia & occupied Crimea rises sharplyUkraine moves to support political prisoners held in Crimea & Russia and their familiesNew strategy needed to make Russia’s Ukrainian hostage-taking hurt & bring political prisoners homeAfter destroying Mariupol, Russia offers its victims money but only if they agree to blame Ukraine Russia deports Ukrainians to occupied Donbas, forcing them to fight its war against Ukraine “I will not fear ZEvil”– digest of Russian protestsRussia sends relatives of Ukrainian soldiers and other Mariupol residents to ‘concentration camp’ in occupied DonbasHorrific conditions and torture in Russian filtration camp ‘ghetto’ for Mariupol residents Russian invaders destroy 97-year-old Ukrainian WWII veteran’s home ‘The bodies were lying in the street. Broken. Pieces. Blood...’ Russian invaders destroy Ukrainian hospitals, plundering medical equipment and abducting medical staff Even in Russia, Putin’s ‘denazification’ claims prove no excuse for war against UkraineOksana Stomina: This is medieval cruelty, multiplied by the modern possibilities and sick, maniacal ambitions‘Mariupol will still be Ukrainian’ – wife of the military22 journalists killed since Russia began its total war against Ukraine‘Back in the day Shoygu and I saved Neftegorsk after an earthquake and now he turns Mariupol into it’
• Topics / The right to liberty and security
• Topics / Human Rights Abuses in Russian-occupied Crimea 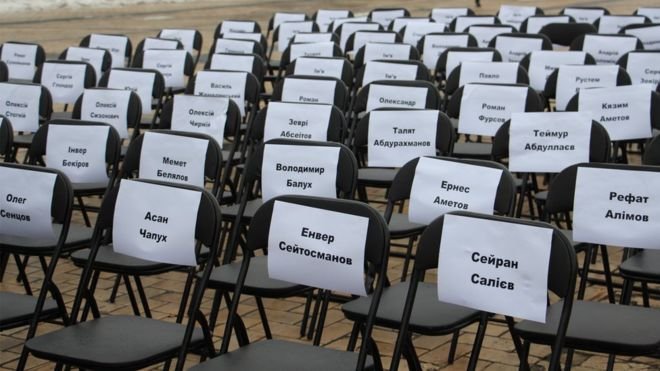 On 21 April, then President-Elect Volodymyr Zelensky called the release of all political prisoners and PoWs his priority.  He now has every opportunity to make that a reality and the relatives of the prisoners and human rights groups have given him a road map on where to begin.  There is urgency to their appeal since at the moment nobody is is responsible for the humanitarian issues and negotiations on hostage exchanges in Donbas.  Zelensky has already made many appointments, some controversial, and families of hostages are asking him to heed their advice before deciding who will be in charge of vital negotiations concerning the prisoners in occupied territory and Russia.

The Association of Relatives of the Kremlin’s Political Prisoners, as well as prominent NGOs, have set out specific proposals which would significantly improve the present situation for both the prisoners and their families.

An absolutely crucial step would be the appointment of a President’s Representative on securing the release of the Kremlin’s hostages.  This person, together with his or her team, would work on preparing a strategy for the release of Ukrainian hostages held by the so-called ‘Donetsk and Luhansk people’s republics’, as well as those imprisoned in occupied Crimea or Russia.  The President’s Representative would be responsible for seeking ways of freeing the hostages and for including foreign experts, well-known and authoritative figures, as well as national leaders, in the negotiating process.  The person would also facilitate the implementation of measures aimed at ensuring state support for the hostages and their families.  The authors of the appeal stress that there is already a document prepared, setting out the duties and responsibilities that the post would entail.

They also call for the creation of a Coordination Council on the Release of Hostages within the President’s Administration.  This would unite the relevant ministries and departments, as well as civic and human rights organizations whose work involves support for the Kremlin’s Ukrainian hostages.  They stress that such a council would enormously increase the effectiveness of the work of all those involved and would consolidate efforts around implementation of a Strategy of Support for and the Release of Hostages.   Here too, the relevant plan has been drawn up – all that is now needed is the will to set the process in motion.

It is also important that Ukraine improves its policy on sanctions against Russia and against those individuals directly implicated in the unlawful imprisonment, torture and other forms of persecution.

International sanctions are also vital and need Ukraine’s support. The appeal also calls for help in lobbying at EU level for the adoption of an EU Global Human Rights Act which would put pressure on high-ranking Russian officials in charge of the repressive system aimed at violating the rights of Ukrainian citizens.  This is extremely important as many of the present sanctions really only affect people somewhere down the line, not those who are responsible for the persecution of Ukrainians.

Although it is parliament that must adopt two important bills, the President’s support is still very important.  The authors of the appeal ask Zelensky to publicly support Draft Bill No. 9438 on amendments to the Criminal Code establishing liability for crimes against humanity, as well as ensuring that the norms on war crimes are in accordance with international law (see After almost 5 years of Russian aggression, Ukraine is still unable to prosecute for war crimes).

Public support from Zelensky is also need for a critical bill tabled in parliament.  Draft bill No. 8205 sets out the legal status of all the categories of hostages, political prisoners, etc, and would ensure state support for them and their families.

As reported, there have been a lot of empty promises about such support and very little serious progress.  The authors of No. 8205 included people directly involved in efforts to secure the release of political prisoners, and the bill is supported by both the families of hostages and human rights groups.  The bill is one of two that have been tabled in the Verkhovna Rada, however there has recently been concern as the other bill, No. 8337, was the one added to the parliamentary agenda.

Essentially everything about No. 8377 is problematical, including the fact that apparent measures to provide social benefits to hostages have been prepared as amendments to the Law on Fighting Terrorism.  In a recent appeal to MPs to reject the bill, the families of hostages and human rights NGOs called it “a populist bill which only imitates defence of all categories of the Kremlin’s hostages, while in fact protecting neither political prisoners, nor prisoners of war, nor civilians, and also not defending their families over the entire period of the Kremlin’s illegal imprisonment of Ukrainian citizens” (more details here).

Russia is holding over 100 Ukrainians prisoner in occupied Crimea and Russia, and there are also at least 119 hostages (civilians and captured Ukrainian soldiers) held in occupied Donbas. Very many of the political prisoners in Crimea were the main breadwinners for families with small children and elderly parents.