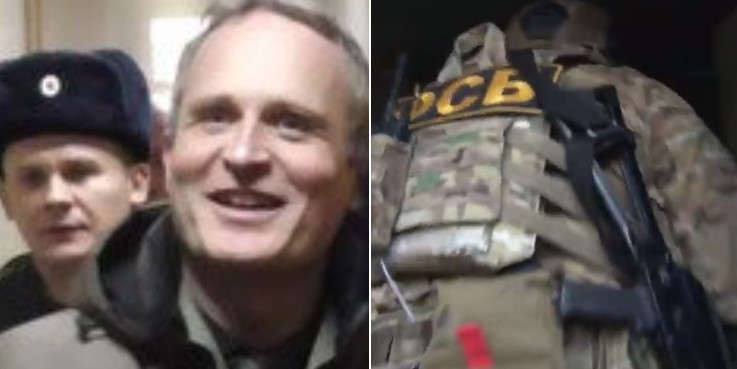 A Russian court has upheld the six-year prison sentence imposed on Dennis Christensen for being a Jehovah’s Witness, with the ruling feared likely to intensify the already mounting persecution of believers in Russia and in occupied Crimea.  Almost 200 Jehovah’s Witnesses are currently persecuted, with that number having risen sharply after the original sentence against Christensen in February.  Russia is thus reverting to the dark days of its Soviet past, with attempts to use ‘anti-extremism’ legislation unable to conceal the fact that it is persecuting Christians for their faith.

The ruling had been anticipated during earlier hearings, and was very likely put off until 23 May in the hope of minimizing attention from the diplomatic community and the media

48-year-old Christensen is a Danish citizen who has been living permanently in Russia since 2000.  He was arrested on 25 May 2017, just over a month after the Supreme Court’s ruling on 20 April banning this world faith as supposedly ‘extremist’.  He was charged under Article 282.2 § 1 of Russia’s criminal code (‘organizing the activity of a religious organization whose dissolution has been ordered due to extremist activities’).

The authoritative Memorial Human Rights Centre swiftly recognized Christensen as a political prisoner.  It pointed out that the charges against him were based solely on his faith, and were therefore in violation both of Russia’s Constitution and of international conventions.

The Russian prosecutor Ivan Fomin and judge Andrei Rudnyov from the  Zheleznodorozhny District Court in Oryol  were undisturbed by the lack of any evidence of ‘extremist’ behaviour, and the fact that Christensen was on trial for his faith.  He was sentenced on 6 February 2019 to six years’ imprisonment, with this sentence upheld on 23 May by presiding judge Olga Zuyenko, together with Alexander Bukhtiyarov and Andrey Rogachev from the Oryol Regional Court.

Not one of those people, nor the Supreme Court judge, acted independently.  It is, however, apparent that the Kremlin is aware that it has crossed another red line by banning a world faith.  In January, Russian President Vladimir Putin suggested that the ban was ‘absurd’.  After the sentence was passed on 7 February, Putin’s press secretary Dmitry Peskov followed this line.  He claimed, on the one hand, that they could not comment on the ‘decision’ of this or that court, while on the other, somewhat opaquely suggesting that there would be an effort to consider whether common sense and legality were not in conflict.

The words seem cynically hypocritical given the scale of repression since the ban was first imposed.  By July 2018, Memorial HRC had recognized 29 Jehovah’s Witnesses, imprisoned for their faith, as political prisoners and warned that the number of people already facing persecution was higher and rising rapidly.

On 13 May 2019, the Jehovah’s Witnesses reported that there had been a real surge in arrests after Christensen’s sentence.

Over the three months since 6 February, criminal prosecutions had been initiated in 25 Russian citizens on analogous charges.  74 believers had faced criminal charges, with 28 of them remanded in custody (although in some cases, they were later released, probably under house arrest.)

141 families had been subjected to armed searches, and at least seven believers allege that they were tortured, including with electric shocks.

This brings the number of Jehovah’s Witnesses currently facing criminal charges to 197, of whom 28 men and women are in pre-trial detention, and 24 are under house arrest.

Most worrying is the rate at which the numbers are rising.  Nine new criminal prosecutions were initiated this week, and that was before Christensen’s sentence was upheld. It seems very likely that the situation could get much worse.

Tragically, Russia is also foisting this religious persecution on occupied parts of Ukraine.   There have been many armed searches in occupied Crimea, first up to 30 in November 2018, then at least six in March this year.  At least two men are reported to be facing criminal prosecution: Serhiy Filatov and Artem Gerasimov.

There have also been numerous administrative prosecutions with believers fined for singing, praying or preaching in public places or in premises not designated as places of worship.  In June 2017 it was also learned that a young Crimean Witness had been ordered to provide ‘proof of change of faith’ in order to be eligible for alternative civilian service.

Russia is in flagrant violation of international humanitarian law by conscripting young men and, in general, imposing its legislation and repressive practices on illegally occupied Ukrainian territory.

The self-proclaimed and Russian-controlled ‘Donetsk and Luhansk people’s republics’ in Ukrainian Donbas follow Russia’s lead in everything and this, unfortunately, is including its persecution of Jehovah’s Witnesses and other faiths, aside from the Orthodox Church under the Moscow Patriarchate (details here).