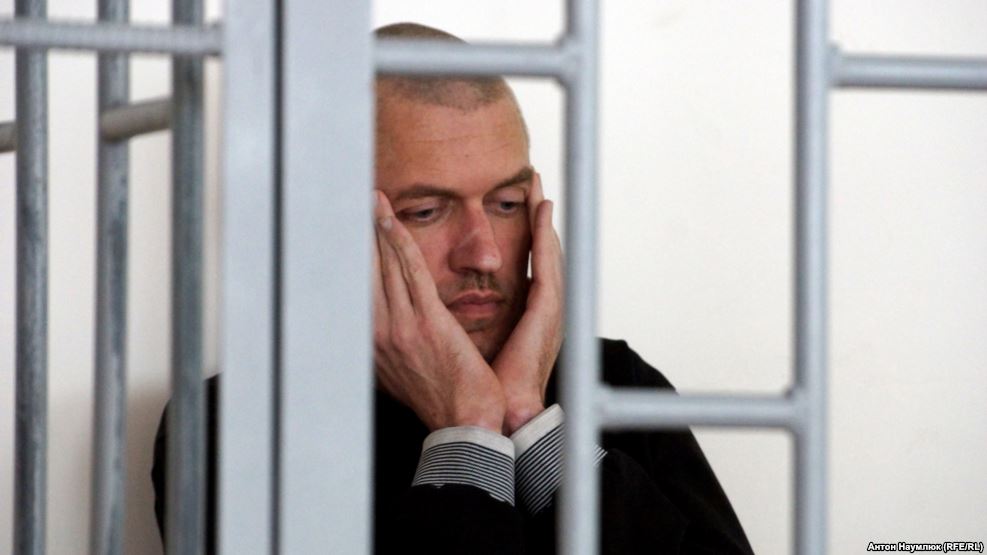 Stanislav Klykh was tricked by a woman into coming to Russia and then seized and brutally tortured to make him ‘confess’ to fictitious crimes.  Russia’s abduction and the 10 months of torment in total isolation did grave damage to his psychological state, however it is the sense of being forgotten and abandoned in Russian captivity that has become unendurable and prompted his hunger strike.

Among those who have reacted to Klykh’s cry of despair is Volodymyr Fomichov, who was held in captivity by the Russian proxy ‘Donetsk people’s republic’ for almost two years.  “The most terrible thing when held captive by the enemy is being forgotten. When you have the feeling that you’ve been forgotten and that nobody needs you”. His experience of having his captors try to convince him that he had been abandoned is important to note given the number of political prisoners in Russia who are being held in effectively permanent solitary confinement.  It is clear that our letters, even when there seems little to say, are a lifeline.

Like almost all of Russia’s Ukrainian political prisoners, Klykh is imprisoned thousands of kilometres from his family in the Chelyabinsk oblast.  The cell is much too cold, and the food, even when he was eating, was so bad that it made him ill.  Everything about the abduction, torture, ‘trial’ and imprisonment of Klykh and 55-year-old Mykola Karpyuk is profoundly cynical, however the brutal cruelty did not end with their ‘convictions’ on charges that ignored both the men’s alibis and historical fact.  A supposed ‘civil suit’ since their conviction has resulted in the men not only being imprisoned for horrifically long periods, but also being ordered to pay one million roubles in supposed ‘compensation’.  This is being used by the Russian prison authorities as an excuse to deduct money from his account, with this, at least in Karpyuk’s case, has meant being unable to even buy envelopes and stamps in the prison shop.

It is with good cause that prominent Russian human rights activist Zoya Svetova called this case “one of the most insane and monstrously falsified prosecutions initiated against Ukrainian nationals since the annexation of Crimea”.

45-year-old Klykh is a historian from Kyiv.  He travelled to Oryol in Russia on 7 August, 2014 to visit a woman he’d met in 2013.  He disappeared the very next day and was held in Russian detention for 10 months totally incommunicado, before being put on trial together with Karpyuk, who had suffered the same treatment for 18 months.  Klykh’s so-called ‘girlfriend’ vanished.

Concerns about Stanislav’s mental health were voiced shortly after the ‘trial’ began in October 2015, yet Russia has rejected calls for an independent psychiatric assessment, including an offer from world-renowned psychiatrists to undertake such a study.

Russia has a great deal to conceal in this case and it is clear why they could not afford him being seen by independent experts.

Russia’s reasons for not wanting Klykh to be seen by independent experts are clear.  There are some medical records that provide proof of the torture Klykh was subjected to, and his behaviour during the trial is probably consistent with the psychotropic drugs he has consistently said that he was given through those months of isolation.

Both men retracted all testimony from the moment they were finally allowed to see proper lawyers, and have described the horrific torture – beatings, electric shock, psychotropic drugs, etc., used to obtain the confessions. Even without the effective confirmation of torture from Klykh’s medical documents,, there is quite simply no other way of explaining why the two men could have ‘confessed’ to wildly implausible crimes, most of which never happened, unless they were tortured.

Russia accused the men of having fought against Russian soldiers in Chechnya at the end of 1994 and beginning of 1995.  They were alleged, together with the former Ukrainian Prime Minister Arseny Yatsenyuk and other prominent Ukrainian politicians, to have tortured and murdered a number of Russian soldiers.  Klykh has told his mother that he was beaten mercilessly to get him to sign a ‘confession’ claiming that Yatsenyuk and Dmytro Yarosh, former leader of Right Sector, were in Chechnya. He says they tortured him so that he didn’t want to live.

Update:  Klykh was threatened with being moved to a general cell and, therefore, gave up his full hunger strike.  He is currently receiving a limited amount of food.

Please make this case known to psychiatric associations, politicians and the media in your country, and, of course, write to Stanislav Klykh and Mykola Karpyuk!

Even a single sentence or two will send an important message both to them, and to the Russian authorities, that they are not forgotten.  Please do include your return address so that the men had write back, and if possible enclose a couple of pieces of light paper, since that can also be in short supply.

Since letters do need to be in Russian to pass the censor, there is a sample letter below which you could write out (in block letters is fine), perhaps together with pictures or photos.

[Dear Stanislav, I wish you good health, courage and patience and hope that you will soon be released.  I’m sorry that this letter is so short, it’s hard for me to write in Russian.  You are not forgotten.]

The same letter can be used for Mykola Karpyuk, with Дорогой Николай at the beginning.