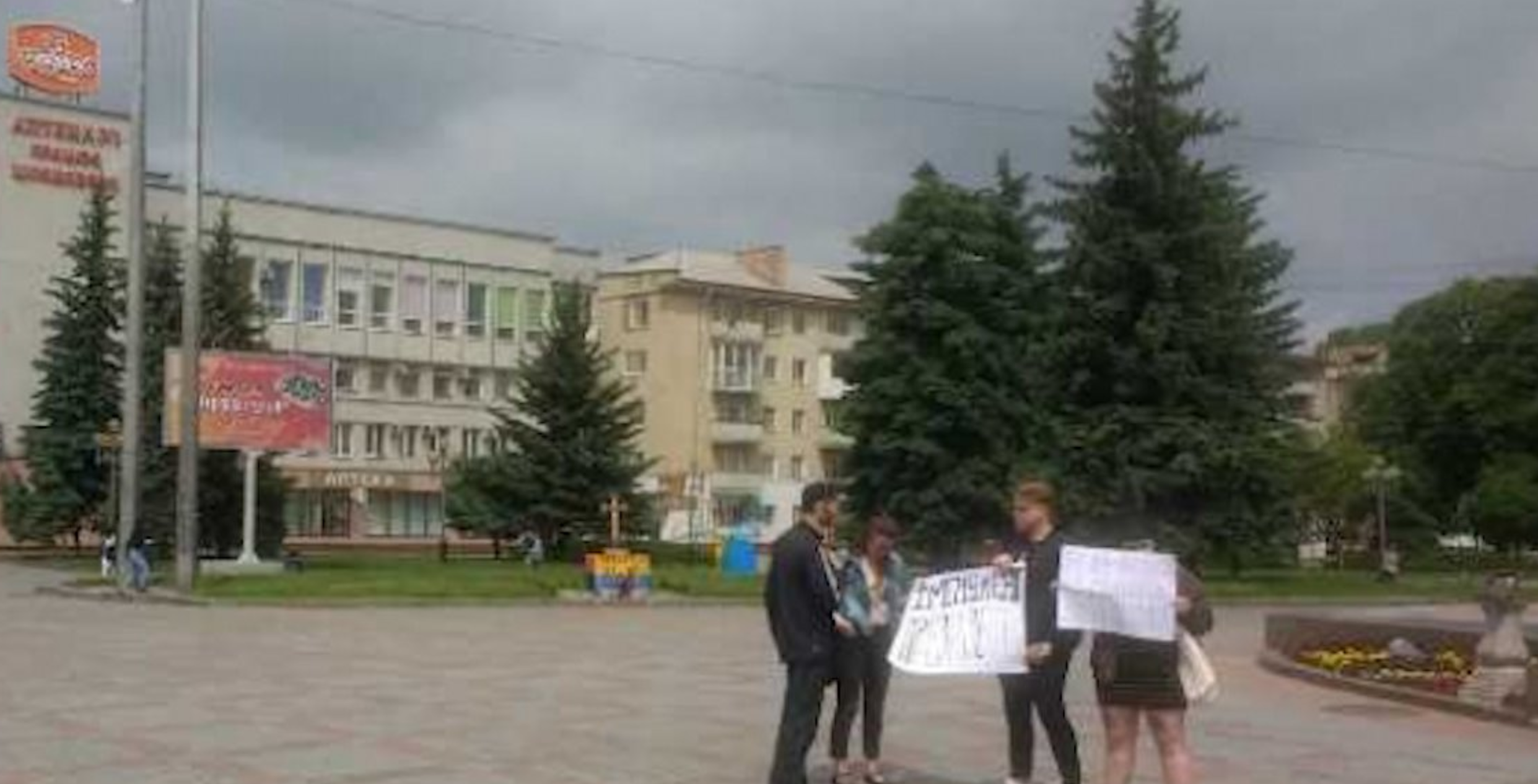 Two young Rivne residents ended up at the police station facing administrative charges on 25 May over their peaceful protest on Rivne’s Independence Square with four placards protesting President Volodymyr Zelensky’s first appointments since his inauguration and calling for his impeachment. The two  – a 16-year-old girl and her 20-year-old male friend – had indeed not informed the authorities in advance of their plans, however the police spokesperson’s claim that this was “an unauthorized meeting” is disturbingly reminiscent of Russia, not Ukraine, where no ‘authorization’ is required.

A passer-by seemingly objected to the messages on the placards, and presumably complained to a police officer.  The latter turned up, seemingly established that the two young people had not given prior notification of this ‘meeting’, and told them to come to the police station.

The police have since claimed that they had been “invited to the station”, not detained, although such a distinction is surely semantic if the young people were not given a choice of going or not.  According to Darya Kotsyuruba, however, in response to her question as to whether a protocol of an administrative offence was going to be drawn up, the officer said no.

The two protesters waited around two hours at the police station, during which time, Darya says, nobody told her whether she was free or not.  She did, in fact, run out and get some coffee and water.  Then Hanna Oleksiyivna Palamarchuk appeared and told Darya to come with her upstairs to give testimony.

According to the young girl, she tried to leave at this point, since she was underage, not there with her mother and had not been detained. Palamarchuk blocked her way, and, according to the girl, was rude and shouted.

Darya’s mother, Nataliya Kotsyurubka was then called in.

The Deputy Head of the Rivne Station, Ivan Teliha’s account of this incident for the public broadcaster UA.Rivne is also rather worrying.  He mentions that a member of the public had reported that two people were holding a meeting “to discredit the President of Ukraine Volodymyr Zelensky.”

After being “invited” to the police station, administrative protocols were drawn up under Article 185-1 of the Code of Administrative Offences which punishes for something called ‘Infringements of procedure for organizing and holding gatherings, protests, street processions and demonstrations’.  The alleged offence was in not having informed the appropriate authorities of the planned ‘demonstration’.  The situation became even more absurd with the young girl’s mother also being given an administrative protocol under Article 184 ‘not properly carrying out duties regarding the upbringing of children’.

Vasyl Zelinsky, head of the Rivne Police, reiterated the claim that this had not been a detention, but an ‘invitation’, and asserted that “we had to react to an infringement of the law’.

Ukraine’s Constitution (Article 39) is very clear in guaranteeing freedom of peaceful assembly, although it does say “upon notifying in advance the bodies of executive power or bodies of local self-government.”

There was no notification, however two people and four placards hardly constitute a challenge to the public authorities.  It is the need to be prepared for potential obstruction to traffic, for the need for more police, etc. that make prior notification necessary.

There have long been calls from civic and human rights activists for proper legislation regulating freedom of peaceful assembly.  The lack of clear regulation and wish to restrict such assembly led to constant bans on protests under the regime of former President Viktor Yanukovych.  In April 2013, the European Court of Human Rights issued an important judgment over the imprisonment for three days in October 2010 of Oleksiy Vyerentsov over a supposedly unauthorized demonstration.  The charge was under two articles, including that applied on 25 May 2019 in Rivne.  The Court noted the “20-year legislative lacuna concerning freedom of peaceful assembly” and stressed the need for urgent reform.

There has thus far been no reform of the system, with the same Article 185-1 having recently been used against Serhiy Sternenko, an Odesa activist, for having unfolded a placard demanding to know who had ordered the fatal attack on Kherson civic activist Katya Handziuk.  The administrative protocol was drawn up because an officer considered that the placard had been unfurled “without permission” in an exhibition hall where a forum with former President Petro Poroshenko was taking place. In fact, the charges were dismissed by the court which found no sign of an administrative offence.

The same is likely in the case of the three people in Rivne, including for another reason. Zelensky himself has intervened, writing on Facebook that he has established what happened.  Although there was no detention, “the enforcement officers could have acted less harshly”.  He says that the police will be carrying out a review and calls on the police to not use measures against political protesters if there are no infringements of the law. “I am not afraid of criticism”, he concludes.

The intervention was appropriate.  It would, however, be even better if Zelensky and other politicians address the need which was evident to the European Court of Human Rights back in 2013 for real reform so that officers are not left to decide at their own discretion what constitutes a infringement of the law.