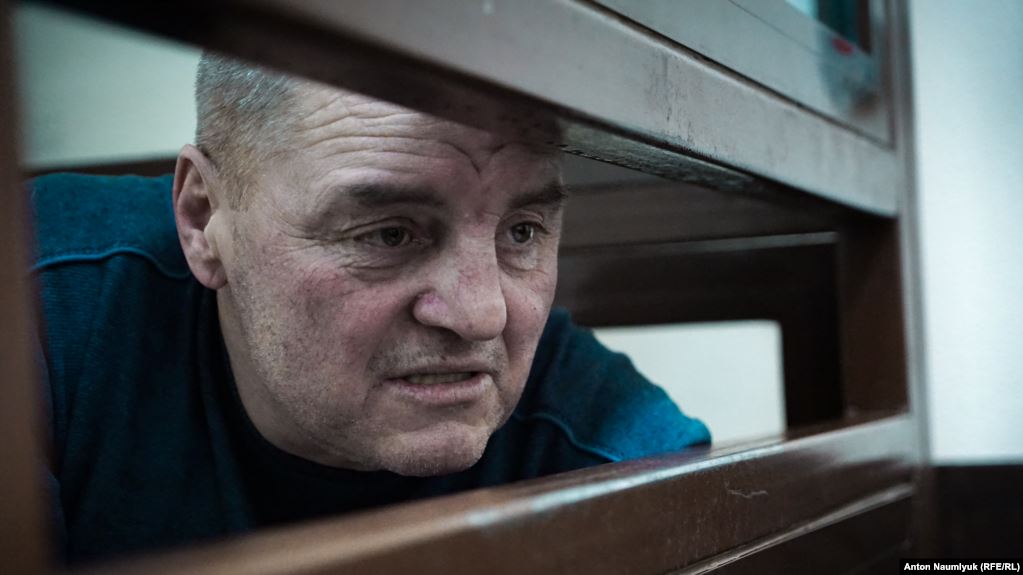 58-year-old Edem Bekirov has been promised house arrest in return for ‘confessing’ to a crime he didn’t commit and could not possibly have committed.  Since the  Crimean Tatar political prisoner’s life is being placed in real danger by his ongoing imprisonment, the FSB are effectively using his physical state and the intolerable conditions of the SIZO [remand prison] as bargaining tools.

Bekirov’s lawyer, Islyam Veliliaev reported on 27 May that the Russian investigator had told Bekirov that he would be immediately placed under house arrest the moment he agreed to admit to the charges. Bekirov reiterated that he had not done what he is accused of, adding that he had never seen that amount of ammunition.  Veliliaev adds that, as Bekirov’s lawyer, he wanted to know what would happen next. They would not be satisfied with a mere ‘confession’, he suggests, but would try to get him to name  Crimean Tatar leaders as having ordered the ‘crime’.

Bekirov has a number of serious medical conditions, each one of which should have prevented him being placed in detention.   He has only one leg and in 2018 suffered a major heart attack and now has four cardiac shunts to regulate blood pressure.  He also has diabetes, although at home in the Kherson oblast was able to get by taking tablets.  In the SIZO, however, the only measure they seem to recognize is insulin injections, which initially caused an allergic reaction.  These appear to be given rather haphazardly, without any attempt to measure Bekirov’s blood sugar level.  During the last Crimean Solidarity meeting on 25 May, Veliliaev noted that they have recently been pumping so much insulin into Bekirov that his body has totally stopped producing any itself, which has resulted in inflammation of the pancreas.

The conditions in the Simferopol SIZO are intolerable even for men in good health and for Bekirov, who is constantly breathless, and in immense discomfort, the situation is particularly serious.  Since the only possibility for getting any fresh air is by walking up several flights of stairs, which he cannot do in his present state, he is totally trapped in a stuffy, filthy and quite unsanitary cell.

The more unendurable, the better, would seem to be the Russian FSB’s attitude, since without a ‘confession’, this trial is particularly shocking even by Russian standards.

Bekirov, who cannot walk without a crutch and who would have difficulty lifting a one and a half litre bottle of water, is accused of having smuggled 14 kilograms of explosives and ammunition into Crimea. Add to this the fact that Bekirov has an alibi for the time of the alleged ‘crime’ and that as the husband of a member of the Mejlis [representative assembly] of the Crimean Tatar people, he would have expected to face particularly scrutiny and the cynicism, both of the charges, and of his ongoing detention, becomes apparent.

Bekirov was seized by the FSB on 12 December when he tried to cross into Crimea to visit his elderly mother and other relatives. He was held incommunicado until well into the evening, and without food or water until the ‘court hearing’ the following day. The FSB accuse him of circulating and transporting more than 10 kilograms of DNT and 190 bullets ((under Article 222 § 2 of Russia’s criminal code).  The charges are based solely on the ‘testimony’ of a supposed witnesses, identified only by his last name, ‘Memetov’, who has claimed that Bekirov passed the explosives and bullets to him in May 2018.  Memetov purportedly placed them in a secret hiding place around Krasnoperekopsk and then in August revealed this place to the Russian FSB and gave testimony against Bekirov.

Russia was ordered by the UN’s International Court of Justice to withdraw its ban on the Mejlis back in April 2017, and is refusing to comply.  It has instead stepped up attempts to discredit the Mejlis, including the botched arrest, that killed 83-year-old  veteran of the Crimean Tatar national movement Vedzhie Kashka and led to four other older members of the Crimean Tatar community imprisoned on insultingly implausible charges.  On that occasion, efforts to (falsely) link the men with the Mejlis were overt and primitive, and this case is no less overtly cynical.

The ‘investigator’ has claimed over the last six months that detention was required for ‘investigative measures’, yet none have been carried out. A new detention hearing is due around 5-7 June.  Since Russian-controlled ‘courts’ in Crimea do what they are told, even when a person’s life could be in danger, it is imperative that Bekirov’s plight and the real danger to his life receive as much international attention as possible.  Please help if you can by contacting your politicians (and the media) in your country and ask them to help put pressure on Moscow which bears responsibility for all persecution in occupied Crimea.