Zelensky appoints Kolomoisky lawyer with shady past to head his AdministrationBombshell PrivatBank ruling and other disturbing moves on the eve of Ukraine’s presidential electionsUkraine needs real debates between Poroshenko and Zelenskiy – candidates are not “colouring books”Where Ukraine’s presidential candidates Poroshenko and Zelensky (don’t) stand on Crimea and DonbasZelensky removes top official who opposed illegal appointment of Bohdan as Head of Presidential AdministrationUkrainian media accuse Zelensky & Co. of deliberate provocation after Bohdan resignation fakePost-election Ukraine. More of the same or a new human rights agenda?Ukraine dissolves notorious Kyiv court recently implicated in Russia’s attempt to reinstall Yanukovych Russian invaders abduct two Ukrainian Greek Catholic priests from Berdiansk and accuse them of ‘terrorism’ Russia kills Minsk Agreement, with lives of over 300 Ukrainian hostages and POWs in danger Kremlin-funded RT presenter claims Ukraine is Russian land that Russia will ‘take back’ by force A child when seized, Bohdan Kovalchuk has spent 5 years in Donbas militant captivity Ukrainians tortured and imprisoned in Donbas for supporting Ukraine, with Russia blocking their release Venediktova drives out key figure helping Ukraine achieve justice over crimes in Russian-occupied Crimea and Donbas An Open Statement Of The Human Rights NGOs On The ECHR Judge Candidates Competition in UkraineJudicial reform in Ukraine is “doomed” if current bill gets passed – Venice Commission Outrage as Ukraine’s Culture Minister allows synagogue to be built on graveyard at Babyn Yar Zelensky gives top post to official involved in storming of Maidan Russian oligarch plans for Babyn Yar seem aimed at fuelling anti-Semitism in Ukraine Ukrainian life sentence – because they needed to arrest somebody
• Topics / Politics and human rights 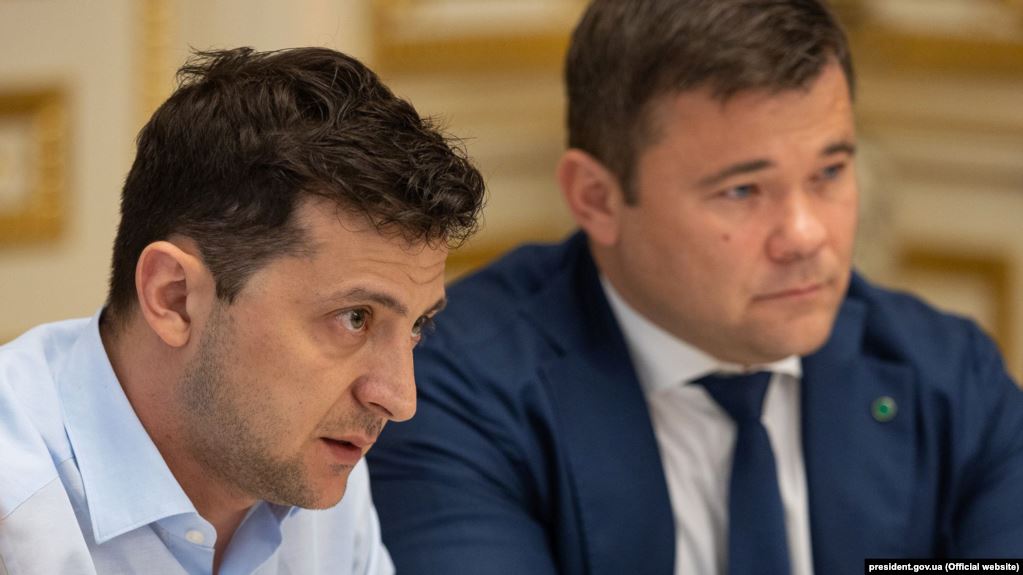 Andriy Bohdan, the newly-appointed head of Ukrainian President Volodymyr Zelensky’s Administration is a man prohibited from holding public office, but Ukraine’s Supreme Court has refused to examine a complaint over the illegality of the appointment.  The Court claims that the only people entitled to appeal the decision are either Bohdan himself, or persons whose rights are directly affected by the appointment.  The right of citizens to expect that elected representatives will comply with the law does not appear to count.

As reported, Bohdan twice held the post of government representative on ‘anti-corruption policy’ under the presidency of Viktor Yanukovych.  He was first appointed, by close Yanukovych associate Mykola Azarov shortly after the latter became Prime Minister in an extremely dubious change of government following Yanukovych’s victory.  Bohdan was also appointed Deputy Minister of the Cabinet of Ministers, and continued to represent the government with respect to its cosmetic anti-corruption policy until 14 February 2011.  He was reappointed to the same post on 11 July, 2013 and only lost it after Yanukovych, together with Azarov and others, fled to Russia at the end of the Euromaidan protests.  Following his dismissal in March 2014, Bohdan became an adviser to Ihor Kolomoisky who was then Governor of the Dnipropetrovsk oblast.  He has since been Kolomoisky’s lawyer, and was informally in charge of the Zelensky presidential campaign and his adviser on legal issues.

The Law on Cleaning up Government (or simply the lustration law) was adopted on 16 September 2014 in part to ensure that the people Yanukovych had installed and who had helped in the systemic degradation of most areas of government were prevented from holding office. For somewhat questionable reasons, a time limit was imposed, namely that a person had to have held a post for over a year but this was the case with Zelensky’s candidate.

Bohdan and others in Zelensky’s team have claimed that the post of Head of the Presidential Administration does not fall under the scope of the lustration law. This is strongly disputed by many people, including Tetyana Kozachenko who headed the Department on Lustration in the Justice Ministry and who was effectively one of the co-authors of the 2014 law.  She points out that this is not even a subject for dispute since the law clearly states who falls under it, and Article 2.5 begins with the post of Head of the Presidential Administration.

An application was made to the Supreme Court against Zelensky’s decree appointing Bohdan.  Although the Supreme Court does not name the plaintiff, this appears to have been the Public Lustration Committee, an NGO.  The application pointed out that Zelensky’s appointment was in breach of the lustration law, and that infringement of legislation “violates the public-legal rules of procedure for the function of bodies authorized to carry out the functions of the state, and infringes the latter’s legitimate interest in compliance with current legislation on cleaning up government…”

The Supreme Court reported on 29 May that it has refused to initiate proceedings in this case for the above-mentioned reason, i.e. that an appeal must be from a person “whose rights, freedoms and interests it [the decree] directly concerns.”

Mykhailo Zhernakov, Head of the Board of the DEJURE Foundation, is scathing about the decision and its motivation which he calls “the most shameful and legally pitiful formulation that the Supreme Court could have come up with.”

For the moment, therefore, Zelensky is not backing down, and Ukraine’s highest court has refused to touch the issue, despite a law which clearly prohibits his choice of candidate from being Head of the President’s Administration.

The situation is made even more worrying by a judgement awaited from the Constitutional Court regarding an attempt to get the lustration law declared unconstitutional.

This is a judgement that is now eagerly anticipated by Bohdan, but one that could only damage public confidence still further given a mystery meeting between Bohdan and the then head of the Constitutional Court, Stanislav Shevchuk, on the eve of the second round of voting in the presidential elections.  As reported, a meeting of the Constitutional Court on 18 April was cancelled without explanation after Skhemy investigative journalists reported the meeting on 17 April.

There was no obvious reason for such a meeting, and the implications are clearly very serious, since a judgement from the Court, which will be final and not subject to appeal, would not just open the way for Bohdan, but also overturn the results of almost five years since the law came into force.