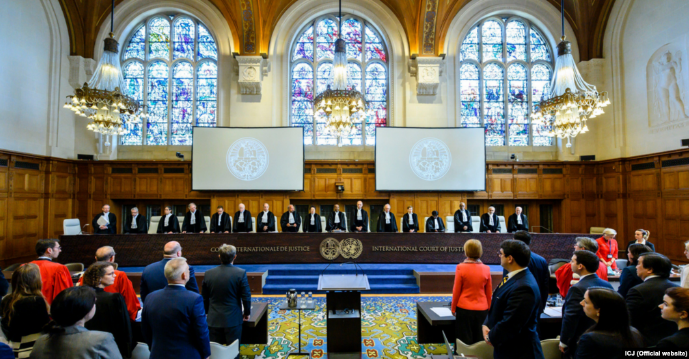 The latest round of hearings is underway before the International Court of Justice at the Hague in Ukraine’s suit against Russia over alleged violations of two international conventions.  Russia is again trying to convince the Court that it lacks jurisdiction in the case, with this just one of the déjà vu features linking the hearings with those in April 2017. There are, however, some crucial differences.  One is that the Court found prima facie jurisdiction over Ukraine’s claims under both conventions on 19 April 2017, and ordered Russia to stop specific forms of discrimination in occupied Crimea, an order which Russia has flouted.

The Convention against Racial Discrimination

After four days of hearings in March 2017, ICJ issued its judgement on 19 April 2017, agreeing to Ukraine’s request for provisional measures only with respect to discrimination against Crimean Tatars and ethnic Ukrainians in occupied Crimea.  By a majority of 13 votes to 3, it ordered Russia to “refrain from maintaining or imposing limitations on the ability of the Crimean Tatar community to conserve its representative institutions, including the Mejlis”.  The order to “ensure the availability of education in the Ukrainian language” was passed unanimously.

The situation with education in Ukrainian has only worsened since 2017, and the Mejlis remains banned.  During the hearings in 2017, the Russian delegation lied about the ban on the Mejlis, casting false aspersions about supposedly violent activities.  It has since twice brought totally fabricated prosecutions against respected Crimean Tatars, with these used by the Russian state-controlled media to try to discredit the Mejlis.

The Russian delegation presented its submissions first on 3 June, and does not seem to have mentioned the Mejlis at all, which is perhaps not surprising, given the contempt of court it has shown by ignoring the latter’s order. The arguments with respect to Crimea were largely identical to those presented in March 2017. A Crimean Tatar who has chosen to collaborate with the Russian occupation regime and who is under EU sanctions for this was added to the delegation, presumably as ‘living evidence’ that there is no discrimination against Crimean Tatars under Russian occupation.

Ukraine’s delegation includes Refat Chubarov, Head of the Mejlis and a Ukrainian MP, whom Russia banned from his homeland within months of its invasion.  Its submission is also backed by considerable amounts of evidence, which has already served as grounds for resolutions condemning Russia’s banning of the Mejlis and persecution of Crimean Tatars and other Ukrainians in occupied Crimea by the UN General Assembly, PACE, OSCE the EU and numerous international NGOs.

Russia is also claiming that Ukraine did not fulfil the demands under the said conventions by resolving disagreement through ‘dialogue’.  One member of the Russian team, for example, asserted that Ukraine was simply pretending to go through negotiations, for the record, without really seeking resolution.  This was the level of argumentation from a representative of the country which invaded and occupied Ukrainian territory, and that brings criminal charges against Ukrainians for objecting to such occupation!  Three Ukrainians in Crimea: Mejlis leader Ilmi Umerov; journalist Mykola Semena and Crimean Tatar activist Suleyman Kadyrov were all given real or suspended sentences for repeating the position of the UN and all international bodies, regarding Crimea’s status.

The Convention on Financing Terrorism

It was clear back in 2017 that this was going to be the harder of the two cases to win. In the summary of its judgement in April 2017, the Court explained that “Ukraine contends that the Russian Federation has failed to respect its obligations under Articles 8, 9, 10, 11, 12 and 18. In particular, Ukraine maintains that the Russian Federation has failed to take appropriate measures to prevent the financing of terrorism in Ukraine by public and private actors on the territory of the Russian Federation and that it has repeatedly refused to investigate, prosecute, or extradite “offenders within its territory brought to its attention by Ukraine”.  Russia denies all of this.  The Court concluded that “at least some of the allegations made by Ukraine” appeared to fall within the scope of the said Convention.

It did, however, note that elements mentioned in Article 2 of the Convention “such as intention, knowledge, as well as the elements of purpose” need to be present. The Court concluded “that, at this stage of the proceedings, Ukraine has not put before it evidence which affords a sufficient basis to find it plausible that these elements are present”, and rejected its request for provisional measures.

Russia is, on the one hand, continuing to claim that the conflict in Donbas is a ‘civil war’ and to deny any involvement.  During Russia’s first presentation in March 2017, Ilya Rogachev claimed that the militants had ‘found’ weapons stored back in Soviet times inside Donbas mines, and that some of the militants’ vast supplies of weapons had been left by the Ukrainian army.

It is certainly easy enough to provide video footage and other evidence, proving that weapons, tanks, etc. came from Russia, however it remains to be seen whether Ukraine will need to, and be able to, prove ‘intent’ and ‘elements of purpose’ to fall under the relevant convention.

It was noticeable, amid all the Russian denials back in March 2017, that one of the foreign lawyers, Samuel Wordsworth, made only a cursory attempt  to deny Russian involvement in the downing of Malaysian airliner MH17.  Instead he concentrated then, and on 3 June 2019, on the likely lack of intent to shoot down a civilian aircraft.

There were some rather staggering moments, such as Wordsworth’s apparent attempt to justify the provision of a Buk missile launcher to the Russian / pro-Russian militants in occupied Donbas.  He sates: “First, the alleged supply of the weapon used to shoot down Flight MH17 was in response to a request for assistance in defending against a series of armed strikes by Ukraine’s military aircraft that were taking place within the context of the ongoing armed conflict.”

Nowhere does Wordsworth, or his Russian teammates, mention crucial information which also makes his use of the term ‘alleged’ highly suspect.  The Joint Investigative Team, which was formed by countries directly affected by the MH17 disaster after Russia blocked a UN investigation, was very specific about the source of the Buk missile.  It concluded that “the Buk missile which downed Malaysian airliner MH17 on 17 July 2014 came from the 53rd Anti-Aircraft Missile brigade which is a unit of the Russian army from Kursk in the Russian Federation”.  … “JIT presumes that within the 53rd brigade and within the circle around it, people have knowledge about the operation in which that particular BUK-TELAR was deployed and about the persons that were involved in it.”

Wordsworth’s claim that no other country but Ukraine treats the so-called militant ‘republics’ as terrorist organizations is also not quite accurate. While he tries to present Russia’s supply of sophisticated surface to air missiles capable of downing a civilian airliner as a “response to a request for assistance”, at least three countries, including Wordsworth’s own UK, have convicted their own citizens under terrorism legislation for fighting with the illegal armed formations in Donbas.

There are two more hearings this week, with Russia responding to Ukraine’s presentation on 6 June, and then Ukraine on 7 June.

The URLs provided on texts in 2017 all seemed to change, so it is easier to go to Pending cases on the ICJ website where there are transcripts of all the above-mentioned hearings. https://icj-cij.org/en/case/166