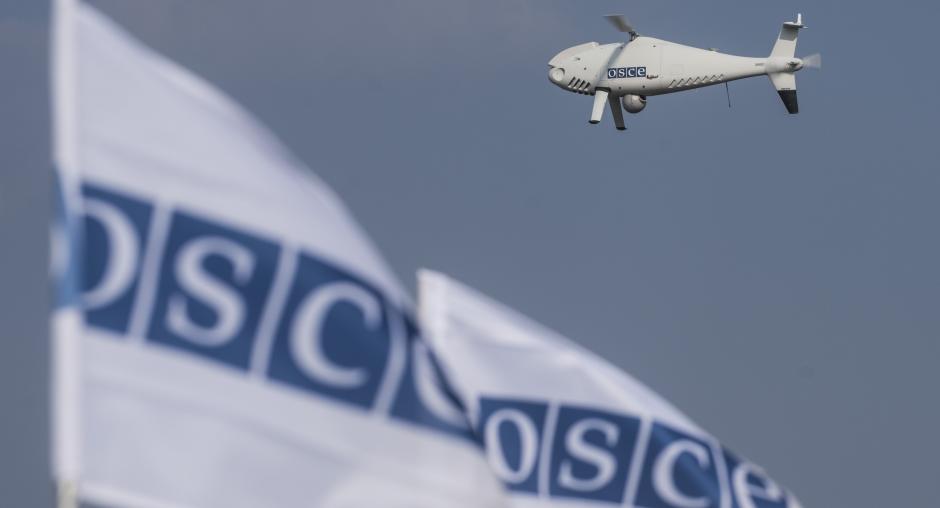 Another convoy of military trucks has been spotted near the Russian Federation’s border with non-government-controlled Donbas. Since the trucks were travelling by night on an unpaved road where there is no official border crossing, it seems safe to conclude that the trucks themselves, as well as what they were carrying, were not supposed to be seen.  The timing of the OSCE Special Monitoring Mission’s spotting could not have been much worse given the hearings underway this week at the UN’s International Court of Justice into Russia’s alleged violation of the UN Convention against financing terrorism through its role in the military conflict in Donbas.  During previous hearings in 2017, a Russian representative claimed that the vast amounts of military technology and arms that the militants use had nothing to do with Russia, but “were found in disused Donbas mines”.

In its report on 4 June 2019, OSCE SMM reported two sightings in non-government-controlled Luhansk oblast, near the border.

On the night from 30 May to 1 June, “an SMM long-ranged UAV spotted three stationary military-type trucks facing west on an unpaved road near Cheremshyne …  about 2km west of the border. The UAV then spotted another military-type truck and a car proceeding from the north-east on a dirt track that is parallel to this unpaved road. The truck and the car then joined the other trucks in a convoy, which then proceeded to a compound of the armed formations on the south-eastern outskirts of Luhansk city (non-government-controlled) where four persons were seen unloading materials from the trucks. At least 35 military-type trucks and an APC (BTR-80) were also seen at the compound.”

A drone also recorded sightings during the night of 2-3 June on this same dirt track, with a car and a stationary military truck first spotted very near the border. Around two hours later, a military truck was spotted driving on the dirt track away from the border.  All of this was clearly planned since the truck and car drove towards a bus station “where a third vehicle (assessed as a probable military-type truck) joined the convoy”.

It seems clear that this was not the only movement.  The report points out that aerial imagery from 19 May showed that two roadblocks from soil on that dirt road back a month earlier were no longer there.  On 29 May, aerial footage showed new car tracks leading towards the border and not present in imagery from 28 April.

There is nothing at all abstract about such sightings. Each month brings new deaths of Ukrainian soldiers from enemy fire, with the weaponry often highly sophisticated. It is likely that Russia is using convoys  travelling by night and trying to elude detection to bring weapons of death to Donbas.

It is not only the fact that these are night convoys travelling on dirt roads that indicate that they are supposed to go unobserved.  There have been several occasions where jamming of the drone coincided with such sightings, and on one occasion, a drone was shot down.

The downing of the drone prompted a strongly-worded Joint Statement from France and Germany, which not only condemned the downing of the UAV, but stated that:“Evidence collected by SMM suggests Russia and the separatists it backs bear responsibility for the targeting and downing of the LR UAV, blinding the mission at this particular spot.”  The joint statement then elicited a rather bizarre response from Marina Zakharova, Russian Foreign Ministry spokesperson.  She claimed that the route of the drone should have been agreed in advance with the so-called ‘Donetsk and Luhansk people’s republics’ [DPR, LPR].  There would certainly have been no need in that case for the drone to be downed, but only because there would have been no likelihood of it spotting what Russia did not want seen.

“An SMM long-range UAV spotted convoys of trucks entering and exiting Ukraine via a dirt track where there are no border crossing facilities in the middle of the night”.

“An SMM long-range UAV spotted a convoy of trucks on a dirt road near the border with the Russian Federation where there are no border crossing facilities in the middle of the night.

Both military trucks and cars were observed.

At around 23.00, two trucks (a Ural and KamAZ), together with four sport-utility vehicles, were recorded driving to a location near the border.  “During the same period, the UAV spotted two Ural trucks (one mounted with an anti-aircraft-gun (ZU‑23, 23mm)), a minivan and a car in a field along the same dirt path, approximately 2km from the border.”

It was at around 23.45 that the SMM was forced to recall the UAV “due to multiple instances of GPS signal loss assessed as jamming.”

“In a non-government-controlled area of Donetsk region, an SMM long-range UAV again spotted vehicles on the unpaved road moving north-east towards the border with the Russian Federation and then south-west away from it where there are no border crossing facilities.“

See also: Russian tanks entering Ukraine that the OSCE is mandated to miss ).