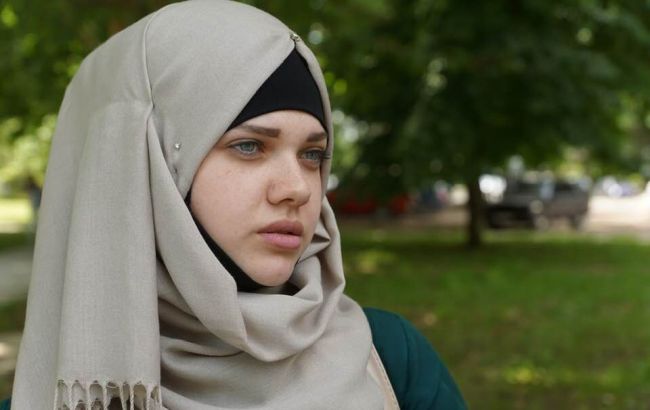 Gulsum Alieva, a young Crimean Solidarity activist, was detained for several hours on 11 June and is now facing administrative prosecution over a Facebook repost.  The time limit for bringing administrative proceedings has long passed, but illegality is unfortunately not something that concerns the Russian FSB.  It can, however, spoil the court’s paperwork, and there appears a chance that the court will refuse to prosecute.

After being held at the crossing between mainland Ukraine and Crimea for three and a half hours on Monday, Alieva was released, but summoned to the prosecutor’s office on 12 June.  The FSB ‘investigator’ in this case was Aleksandr Kompaneitsev, a former Ukrainian SBU turncoat, who is believed to have played a major role in the torture and other illegal methods attempted against Gulsum’s political prisoner father Muslim Aliev, human rights activist Emir-Usein Kuku and four other men. The prosecutor informed Alieva and her lawyer, Alexei Ladin, that she was facing administrative charges under Article 20.3.1 of the Russian code of administrative offences over a reposted image on Facebook.

This prosecution is the squalid continuation of an offensive against the young Crimean Solidarity activist and her family that began on 19 July, 2018 when the FSB and other officers, some masked, arrived at the family’s home.  Gulsum’s youngest brother had been just seven when his father was taken away after a similar ‘operation’, and he was clearly deeply traumatized at this new ‘operation’ which also resulted in Alieva being taken away, although only for interrogation.

Criminal charges were laid a month later, on 10 August 2018, under Article 282 (inciting enmity) in connection with a picture and text that Alieva had reposted on her Facebook page.  This was a widely circulated image of the philosopher Ilya Ilyin with what appeared to be his very strong criticism of Russians.  At the top and bottom of the reposted image, which can be seen here, were the words “Russia is a country of moral monsters” and (at the bottom) ‘Death to Russian occupiers!”

This was simply a reposted text, with Alieva adding no comment from herself.  Article 283 was, however, at the time a favourite of Russia’s notorious ‘anti-extremism’ norms, with the FSB regularly finding ‘calls to enmity’ in innocuous social media posts or reposts.  Alieva was duly added to Russia’s ‘List of Extremists and Terrorists’ which already contains the names of many recognized Ukrainian political prisoners.

The charges against her, and several other Crimean Tatars, were finally dropped in January 2019, because a new law introduced a modest improvement in the repressive force of Article 283, with a first supposed ‘offence’ falling under administrative legislation.

Now in June 2019, Kompaneitsev has come up with administrative charges over the same harmless repost.  Ladin explained to the prosecutor on 12 June that the time limit for bringing such proceedings had long passed, and that the only sensible option was to terminate them here and now.  He was ignored with the prosecutor saying that ‘the case’ is to be sent to the court.  Ladin has lodged a formal application for termination of the proceedings which even the Russian-controlled prosecutor must respond to.

There have been a number of administrative prosecutions of Crimean Tatar women over the last year, including an incredible sentence against 49-year-old Zarema  Kulametova in April 2018 for supposedly ‘insulting’ a police officer on the day that her son disappeared for several hours after being taken away by armed enforcement officers.  She was sentenced to 250 hours of compulsory labour, and also ordered to pay 20 thousand roubles ‘compensation’ to the officer who had claimed to have been ‘depressed’ for several months (details here).

Of greatest concern, however, was the detention of two Crimean Solidarity activists Lutfiye Zudiyeva and Mumine Salieva on 30 May 2019.  Both women were held in the so-called ‘Centre for countering extremism’ for many hours, with the lawyers who arrived almost immediately prevented from seeing them.  This was a very obvious and aggressive act of intimidation, with both women then prosecuted on absolutely absurd charges.