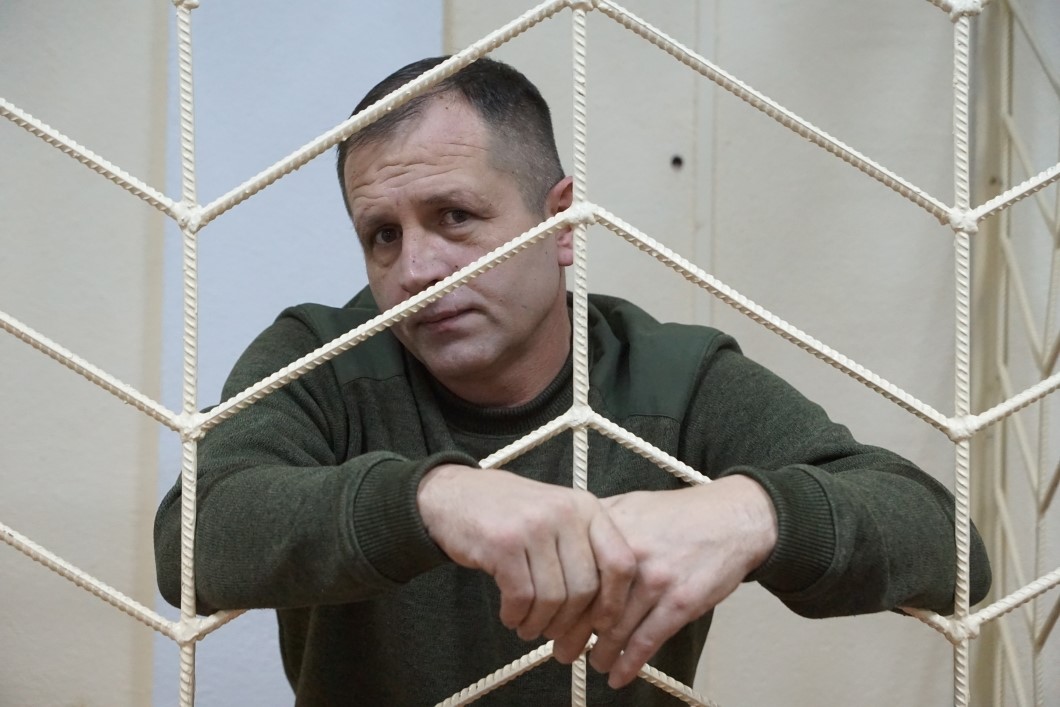 The Russian authorities are not content with merely imprisoning Volodymyr Balukh for the Ukrainian flag over his home in occupied Crimea.  Since being moved, without any good reason or warning, to Russia in February 2019, Balukh has been placed five times in a punishment cell  where the conditions are especially harsh. Russia is still refusing to allow the Ukrainian consul to visit him and appears to be trying to deny a Ukrainian persecuted for remaining true to his country his Ukrainian citizenship. In protest at all of this, Balukh announced that he was going on hunger strike on 25 June, and is, most worryingly, refusing even water.

Balukh’s lawyer, Olga Dinze, has just visited him in Torzhok (Tver oblast) and confirms that he has indeed been rejecting any food or water in protest at his treatment and the refusal to allow him to see the Ukrainian consul. Such a dry hunger strike is extremely dangerous and will swiftly affect all bodily organs, as well as the nervous system.  When Dinze saw him on 28 June, he had already been three days without even water, and had not slept for two nights.

Dinze has addressed a report to the head of the prison, asking that Balukh receive 24-hour medical care and that he be placed in a medical unit. She stresses that the European Court of Human Rights directly states that a person on hunger strike must be provided with full comprehensive care, without violating his or her right to hold the hunger strike.

It was after Dinze visited Balukh on 21 June that it was first understood how the prison authorities are essentially fabricating grounds for holding Balukh in a punishment cell (once for 12 days, all the other occasions for 15).  He was also visited by an Orthodox priest, Grigory Mikhnov-Vaitenko whose concern about Balukh’s health in the prison prompted him to turn to another lawyer, Danil Berman.  The latter managed to visit Balukh twice and has given details to Viktoria Ivleva, from Novaya Gazeta about how Balukh is being treated. While Berman himself had no problem seeing Balukh, he says that he saw the Ukrainian consul who had been prevented from seeing Balukh, and not for the first time.

Berman learned of the ‘grounds’ for the five (to date) periods in a punishment cell.  Even if one assumes that all the alleged ‘infringements’ did take place, he says, the punishments are clearly disproportionate and much more than other prisoners receive.  Balukh is Crimean, and used to a much warmer climate than in Russia.  He was moved when it was still winter and was told that his warm clothes would be sent to him.  On arrival in Tver, a prison guard flung a jacket at him which he rejected.  That prompted the first 15-day period in SHIZO.  There have also been two periods in the punishment cell for not greeting prison staff.  In fact, the second of these occasions was clear provocation, with the officer coming up from behind.  Balukh had not greeted him since he had not seen him, but a spell in the punishment cell was still imposed.

The last occasion was because Balukh had laid down, although he had already warned the convoy officer that he was feeling unwell and had asked for a doctor to be called.

Berman calls this imprisonment in SHIZO real torture for Balukh who has not only had all his warm clothes removed, when it has turned quite cold in the Tver oblast, but they also took his psalm book away from him.

Ivleva commented that the Ombudsperson for the Tver oblast had ordered that Balukh be issued with warm clothing, however neither Balukh, nor Berman, had heard anything about this.

Berman adds that they are trying to get a heart specialist admitted to Balukh given real concerns about his health which are only intensified by the hunger strike which he announced in a formal letter of notification to the prison administration on 25 June.  In the letter, Balukh states that he is going on hunger strike over the fact that he has been held in inhuman conditions, in a SHIZO for over two months; also, because he is being refused visits from the Ukrainian consul although he is entitled to such visits as a Ukrainian citizen. Balukh stresses that he is not a citizen of Russia or any other country, except Ukraine.

Novaya asked Berman if he was not worried that his open account of his visit could harm Balukh.  He replied: “I know with certainty that Volodymyr is harmed by being held in a punishment cell without any break, and now in a cell without virtually any light, where he is constantly freezing, does not receive the proper medical care that he needs. Practice shows that in such a situation publicity is the best defence.”   It is for this reason, he says, that Balukh asked him to explain the reasons for his hunger strike.

Balukh is internationally recognized as being imprisoned for his pro-Ukrainian views and for the Ukrainian flag which he refused to remove from the roof of his home after Russia’s invasion and annexation of Crimea.

His imprisonment is the culmination of persecution since 2014 which began with three administrative prosecutions and then two criminal ‘trials’.  All of the prosecutions were evidently fabricated and implausible.  It is quite likely that Russia has no problem with this since it is using it as a menacing warning to others who dare to show opposition to its occupation of Crimea.