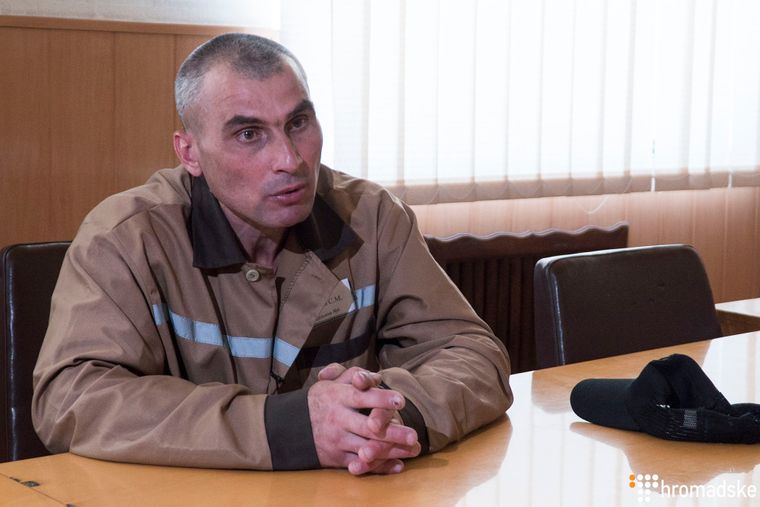 Serhiy Lytvynov, one of the Ukrainians most savagely tortured in 2014 for Russian propaganda, is safely back in Ukraine, though for the moment he remains imprisoned.  .He was returned in accordance with the Council of Europe’s Convention on the Transfer of Sentenced Persons, with the Ukrainian side deliberately seeking minimum publicity, both for Lytvynov’s sake, and that of other political prisoners whom it was hoped could be returned in the same way.

Ukraine has freedom of the press and things did not work out quite as planned.  On 27 June 2019, Hromadske TV journalist Anastasia Stanko reported that Lytvynov had been discovered in a Kharkiv prison, with the story immediately taken up by other media.  Stanko has now released an interview which she took of Lytvynov.  While acknowledging the comment made by Deputy Justice Minister Serhiy Petukhov that “the hype around Lytvynov’s case” would hardly help Ukraine in bringing other  prisoners illegally held in Russia back, she says that “Hromadske considers this subject to be of public significance” and that she is now publishing the interview with Lytvynov.

The damage was largely done by the first article, though it is unfortunate that the interview is only of Lytvynov himself, and not of the human rights activists and lawyers very closely involved in defending Lytvynov earlier and in securing his return to Ukraine.  While Lytvynov is clearly very happy to be back in Ukraine, and confirms that he had lost a huge amount of weight in the harsh conditions of the Magadan prison in the Far East of Russia, he says he does not understand why he has not been released.   Everything about Lytvynov’s abduction, torture, ‘trial’ and sentence was immensely cynical and there were certainly never any grounds for his imprisonment.  The problem is, however, that any chance of using this extradition agreement will be lost if Russia sees that its hostages are being freed on their return to Ukraine.

Lytvynov was the least high-profile of any of Russia’s Ukrainian political prisoners which may have been one of the reasons why the Russian authorities agreed to hand him over.  As reported, Ukraine’s Ambassador Diana Ivanova had only finally been allowed to visit him in Magadan in July 2018.  She reported then that he had lost 17 kilograms over the last six months due to the appalling food in the harsh-regime prison and the fact that he was not receiving parcels from Ukraine. He had also been held in a punishment cell for the supposed ‘infringement’ of wearing non-prison clothes because the prison had not issued him with clothing.

The tragic death of Lytvynov’s very talented and committed lawyer Viktor Parshutkin in February 2017 probably also intensified the degree to which Lytvynov was isolated.  It is cheering, however, that he did receive letters from people all over the world, which obviously meant a lot to him.

Different times are given in the two Hromadske texts for when Lytvynov was returned to Ukraine, with the interview posted on 1 July saying that he arrived in Kharkiv on 9 May 2019.  These are not the only discrepancies and in the account below, details given earlier, where these were discussed with Viktor Parshutkin, are retained.  Lytvynov was not, for example, first tried and sentenced on the preposterous war crimes charges, since Russia’s Investigative Committee had been forced to withdraw the charges before they reached the courts.

Lytvynov was a farm worker in the Luhansk oblast when, in August 2014, he was forced to cross the border into Russia’s Rostov oblast to get treatment for a severe tooth abscess. He had no choice since Russian and Russian-backed militants had seized control of the territory where alternative hospitals inside Ukraine were located.

While recuperating in hospital, Lytvynov was noticed by some militants who were receiving medical treatment in a Russian hospital for injuries received fighting against Ukraine in Donbas.  They decided that Lytvynov, presumably by virtue of being Ukrainian, should be ‘reported’.

He was seized from the hospital, viciously tortured into signing ‘confessions’ to multiple war crimes which he was supposed to have committed as a member of the Dnipro volunteer battalion.  He had never heard of this battalion, and had, in fact, never even done military service on health grounds.

It was clear from the Investigative Committee’s announcement on Oct 1 2014 that Lytvynov’s trial was to serve as ‘proof’ of Ukraine’s “‘genocide against the Russian-speaking population in Donbas”.

Lytvynov was accused of having personally carried out murders of women and children.  The Investigative Committee produced a video with Lytvynov ‘confessing’ which was widely reported by the Russian media, with Lytvynov everywhere presented as a monstrous war criminal.

After Lytvynov was finally given access to a proper lawyer, he retracted the ‘confessions’, explaining that they had been tortured out of him.

Parshutkin succeeded in proving that the impugned war crimes had never taken place and could not have since neither the alleged victims, nor their addresses, actually existed. He also demonstrated that Lytvynov, who has learning difficulties, had simply signed the ‘confessions’ put in front of him.

Lytvynov had already been in custody for almost a year and, after all the hype and publicity over fictitious war crimes, the investigators had no intention of simply releasing him.  Immediately after the Investigative Committee was forced to withdraw the other charges, a Russian national, Alexander Lysenko, suddenly appeared and claimed that Lytvynov, together with two unidentified Ukrainian soldiers, had robbed him in Ukraine at gunpoint.  Lytvynov was supposed to have burst into a house, armed with a machine gun, beaten up Lysenko and stolen two cars.

There was virtually no attempt to make the charges seem plausible and every aspect of this new ‘case’ was demolished in court, yet Lytvynov was still sentenced to 8.5 years’ imprisonment.  That sentence was upheld by the appeal court.

He has now been imprisoned for almost five years.