Baffling denial by Italy of war in Donbas as excuse for trial of Ukrainian soldier MarkivUkraine urged to show Italy that soldier Vitaly Markiv is innocent, or face Russia being seen as ‘liberator’Italian court fails to explain 24-year sentence against Ukrainian soldier MarkivMarkiv Trial: Film finds witnesses, Russian propaganda & answers to vital questions the Italian prosecutor didn’t askCrucial tests in Donbas should overturn Italy’s 24-year sentence against Ukrainian soldier MarkivVital evidence proves that Ukrainian soldier Markiv had nothing to do with Italian journalist’s deathAppeal begins in Italy against shocking 24-year sentence of Ukrainian soldier Vitaly MarkivInternational human rights defenders find critical failings in Italy’s trial & 24-year sentence of Ukrainian soldier MarkivUkrainian soldier Vitaly Markiv acquitted and freed in Italy!Italy detains Ukrainian theatre director who left Russia in 2014 in protest at its aggression against Ukraine Italian public broadcaster pushes Russian lies about MH17 and war in Donbas Russia waited till Ukrainian civilians reached work to bomb Mykolaiv Regional Administration Putin will continue attacking until Russia is stopped. Help Ukraine defend its freedom today!Russia kills Minsk Agreement, with lives of over 300 Ukrainian hostages and POWs in danger Russia is already holding many Ukrainian POWs without any declaration of warRussian parliamentarians move to ‘defend compatriots’ by recognizing Donbas pseudo ‘republics’ Ukrainian accused of torturing hostages at Russian-controlled Izolyatsia secret prison flees to France and "asks for political asylum’“Memorial” cannot be closed – it is the need to know the truth about the tragic past: statement of the Ukrainian human rights organizationsMother with grave health issues imprisoned by Russian-controlled militants for trying to save her sonRussia blocks OSCE conference when prevented from spreading disinformation about occupied Crimea and Donbas
• Topics / The right to a fair trial 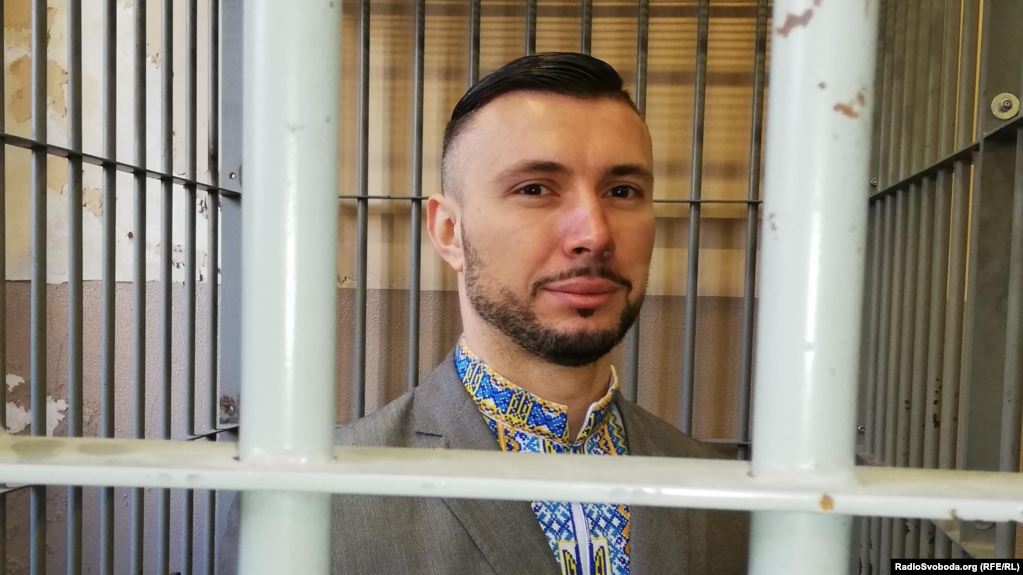 A court in Pavia, Italy, has found Vitaly Markiv, a Ukrainian National Guard soldier, guilty of involvement in the death during the first months of the war in Donbas of 30-year-old Italian photojournalist, Andrea Rocchelli (and his Russian interpreter, Andrei Mironov) and sentenced him to 24 years’ imprisonment.   The sentence is far worse even then the 17 years  demanded by the Italian prosecutor and is deeply disturbing, given serious concerns about both the charges and the evidence provided to back them.

Details are scant at present, with a Hromadske TV journalist present reporting only the sentence and that one of Markiv’s lawyers, Raffaele Della Valle, was taken ill in court and an ambulance had been called. It seems certain that Markiv, who denies the charges against him, will appeal the verdict and sentence.

As well as the criminal charges,  Markiv was also facing a civil suit brought by the National Federation of the Italian Press,  the Lombard Association of Journalists and Cesura.Lab. The latter had also, reportedly, lodged a civic suit against the Ukrainian state over Rocchelli’s death.

The prosecution essentially claimed that Rocchelli’s death had been murder, and that Markiv had provided information to the Ukrainian Army about Rocchelli’s whereabouts. The Italian prosecutors refused to carry out an investigation at the site of the events and also rejected Ukraine’s offer to form a joint investigative group.  The proposal came after Markiv’s arrest in 2017, and earlier reports from the trial suggest that the prosecution often acted as though it was the Ukrainian authorities who were on trial and criticized for lack of progress in investigating the deaths.  The Ukrainian Interior Ministry rejected the criticism, saying that a full investigation would only be possible after cessation of military action in the area.

During her final address on 5 July, one of Markiv’s lawyers, Donatella Rapetti had dismissed the prosecutor’s assertion that her client’s guilt had been proven, called the charges absurd and asked for Markiv’s full acquittal.

She rejected the prosecution’s assertion that the men were killed by mortar fire, and said that, in fact, the studies carried out did not make it possible to state with certainty what the weapon was that killed them, and what direction it was fired from.

29-year-old Markiv has dual Ukrainian and Italian citizenship, which made it easy to arrest him on 30 June 2017, when he arrived in Italy to visit his mother.  He has been held in detention ever since, although the initial charge of murder was changed to the much more vague ‘involvement’ in Rocchelli’s death before the trial began.

It is by no means common for Ukrainian soldiers to also have Italian citizenship, so the odds against such a soldier also happening to be a person directly implicated in the death of Rocchelli on 17 May 2014 near Sloviansk seem rather high.

Markiv’s knowledge of Italian did, however, explain how he came to be known to an Italian journalist Marcello Fauci.  It was the latter’s colleague, Ilaria Morani, whose article on 25 May 2014 appears to have first prompted the charges against Markiv. The article wrongly identifies Markiv as a captain of the Ukrainian Armed Forces and quotes him as warning them to stay clear of the military zone.  He supposedly went on to say: “We don’t usually shoot in the direction of the city or civilians, however where we see movement, we load heavy artillery. This is what happened to the car with the journalists and the interpreter. We shoot from here within a kilometre and a half. There is no clearly delineated front here.  It is not a war like Libya. There are actions scattered throughout the city, we await only the green light for the final attack "

It is not necessarily evident why this was supposed to be incriminating, especially as Markiv had positively tried to discourage Rocchelli and Mironov from entering a war zone, as had the Italian government.  The Ukrainian Army was facing constant shelling and did need to defend themselves.  Neither Rocchelli nor Mironov had official accreditation, and the taxi in which they were driving was not identified as being a press vehicle.

During her address on 5 July, Rapetti stressed that Markiv’s duty as a soldier had been to inform his superiors if any suspicious individuals were approaching. The soldier had thus been carrying out orders and there had been nothing reprehensible in his behaviour.  She pointed out that according to Italy’s military criminal code, you cannot punish a military serviceman for carrying out an order since, in wartime, a soldier must obey, not start discussing orders.

Speaking of the absurdity of the charges, she stressed that it wasn’t clear who had been responsible for the shooting on 24 May 2014, or where the shooting had been from. “Nobody deliberately wanted to kill the journalists. These people became victims of war, and in war they shoot against the enemy.”

William Roguelon, the French journalist who was in the taxi, but survived, has acknowledged that he did not see who was firing. He has given  conflicting accounts since the events, and there is suspicion that his assumption that the shelling came from the Ukrainian side is due to support for the militants. During their questioning in December 2018, other journalists reportedly acknowledged that they do not have direct proof of Markiv’s involvement in Rocchelli’s death.

As reported earlier, this trial bears an eerie resemblance to that of former Ukrainian military pilot Nadiya Savchenko.  She was caught by the Russian-controlled militants in the Luhansk oblast in June 2014, and then illegally taken to Russia, where a show trial was enacted.  The charges against her pertained to the death of two Russian journalists from a Russian state-controlled channel, who were caught in cross fire and killed shortly after she was taken prisoner. Russia claimed that she had climbed a television tower and with the help of sophisticated technology which was never produced at the ‘trial’, had informed Ukrainian soldiers of the exact whereabouts of the two journalists. Savchenko’s imprisonment and eventual 22-year sentence were internationally condemned as politically motivated.