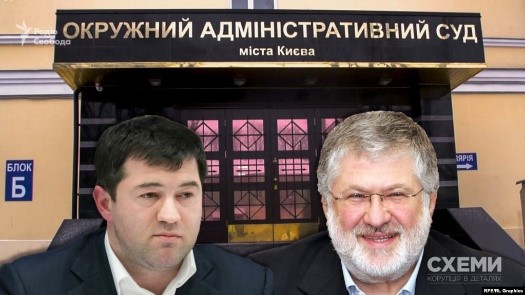 Skhemy Corruption in Detail investigative journalists have uncovered the methods used to bypass an automated system in the Kyiv District Administrative Court aimed at ensuring random selection of judges for each case.  Their investigation is of particular importance given that the court in question has been behind many eyebrow-raising court rulings.

Vitaly Tytych, well-known lawyer and member of the Public Integrity Council, explains that before the (official) introduction of an automated selection system in 2010, there was such widespread corruption in this area that the actual prices were known for getting a case ‘examined’ by a specific judge.  It was the prerogative of the president of the court to distribute the cases, and even if the money was physically handed to somebody else, it was the president who received it.

The theory is that an automated system ensures that cases are heard by judges who do not have a vested interest in a case.

The practice appears to be different. Skhemy journalist Serhiy Andrushko followed court activities over several weeks, and discovered the mass ‘illnesses’ and other causes that resulted in only one judge being available on a given day.  On 17 April, for example, 38 judges were either on maternity leave, sick or, in five cases, “other”, leaving only one judge, Ihor Pohribnichenko.

Tytych notes that there must be “a subtext” to such apparent paralysis of the court, in which only one judge was able to perform his duties, and says that there clearly needs to be an investigation.

If the party that loses a court case believes that the judge was biased, s/he can demand that it is reviewed.  Skhemy learned that the State Judicial Administration receives up to 10 complaints of possible interference in allocation of cases each month, with the Kyiv District Administrative Court often figuring in such complaints.

One such complaint was from the General Director of the Mayak Factory who had demanded the withdrawal of Judge Pohribnichenko on the grounds that the latter had been ‘selected’ without any other choice, with 38 colleagues excluded (due to maternity leave, ‘illness’ or ‘other’).  The application for Pohribnichenko’s removal was rejected although the complainant alleges that three of the judges who were excluded had, in fact, been present in the court, as they had issued rulings in other cases.  Of these three, Dmytro Kostenko has, according to the automated system, been on leave for 14 days, while Ihor Smoliy was one of the five judges whose lack of availability was merely explained as “other”.

Andrushko sought an interview with the third judge whose name was on a court ruling – Oleksiy Ohurtsov.  He initially tried to avoid the journalist but then gave in and invited him into his office, taking off his judge’s toga “so that it’s not so official”.  He claims that it was his assistant who on 17 April input a draft of the ruling on the database which he looked at when he returned to work on 19 April.  As for the failure to change the date which was now wrong, well “everybody makes mistakes”.

Skhemy reports that there was a ‘choice’ of only one judge in a number of cases on 17 April, including over an application to stop the competition for head of the State Customs Service.  The latter was recently won by Maksym Nefyodov, who has been actively behind the Prozorro Public Procurement system.  His or any appointment had been put on hold for two months after Pohribnichenko allowed an application from MP Andriy Antonishchak for the competition to be suspended.

The third party in the case was Roman Nasirov, the ex-head of the State Fiscal Service, and Skhemy believes that it was he who had an interest in the competition being stopped, since he was hoping for the post.

There was another District Administrative Court ruling in favour of Nasirov, with Skhemy uncovering “manipulation over the case specialization” which the journalists believed was aimed at ensuring that certain judges examined the case.  Nasirov’s reinstatement as head of the State Fiscal Service by the same District Administrative Court in December 2018 elicited outrage.  Nasirov was initially suspended in March 2017, following his very high-profile arrest on serious embezzlement charges, and then dismissed in January this year.

Skhemy has also identified manipulation behind the selection of District Administrative Court judges responsible for another highly controversial ruling in April 2019.  As reported, the court on 18 April found in favour of oligarch Ihor Kolomoisky and ruled that the nationalisation of PrivatBank had been unlawful, Kolomoisky was a co-founder of PrivatBank which the government nationalized in 2016, as part of a banking clean-up, supported by the International Monetary Fund.  Both the European Union in Ukraine and the US Embassy reacted to the news of the ruling, issuing  identical statements affirming their support for the nationalization of the bank.

The motive behind moves to bypass the automated selection process seems depressingly clear.  In the case of the Privatbank ruling, judicial watchdogs immediately reported that the three judges who had passed the ruling (Vitaliy Amelyokhin; Ihor Kachur and Volodymyr Keleberda) had all received negative assessments from the Public Integrity Council, over suspicion of corruption or questionable rulings.