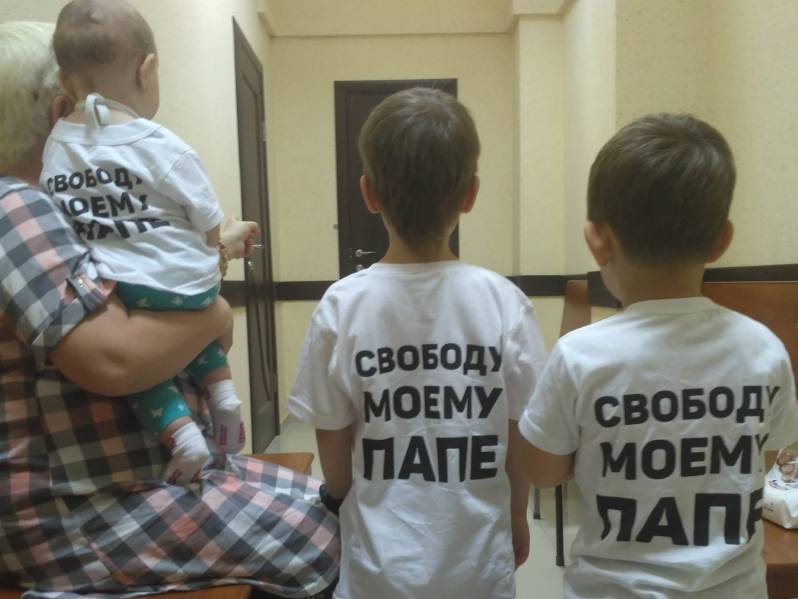 The renowned Memorial Human Rights Centre has demanded the release of five Crimean Tatars sentenced by a Russian court to periods of up to 17 years’ imprisonment and points out that the five political prisoners were “tried on a terrorist charge, without being accused of terrorism”.  The same concern about Russia’s “unfounded terrorism charges” was expressed on 12 July by the international NGO Human Rights Watch which pointed out the that “Russian authorities seek to portray Crimean Tatars who oppose Russia’s occupation as ‘terrorists’ and ‘extremists’” and use “terrorism charges as a convenient tool of repression.”

HRW’s statement was prompted by the armed searches and arrests on 27 March 2019 and subsequent days of 24 Crimean Solidarity or other civic activists and journalists.  This was an operation of unprecedented scale and left absolutely no room for doubt that the men had been targeted as activists, however Russia’s use of ‘terrorist’ legislation as a weapon against Crimean Tatars and other Ukrainians began much earlier.

The armed searches in Stroganovka near Simferopol on 12 October 2016 and arrest of five Crimean Tatars marked the fourth such ‘operation’ against men who had committed no crimes and their families.  It unfortunately followed the same pattern as previous cases, with the men immediately remanded in custody and their families deprived of the possibility of seeing them even during the formal detention extension hearings.  Two brothers: Teymur and Uzeir Abdullaev were especially badly treated, with Teymur placed in a punishment cell for writing a letter to his family in Crimean Tatar.  The conditions in the Simferopol SIZO where the occupation regime is holding an ever-mounting number of political prisoners are so appalling that they can in themselves be considered torture.

Teymur and Uzeir Abdullaev, Emil Dzemadenov; Rustem Ismailov and Aider Saledinov were accused solely of unproven involvement in Hizb ut-Tahrir, a peaceful pan-Islamist organization which is legal in Ukraine.   In these cases which have rightly been referred to as a conveyor belt of repression, it is irrelevant that Hizb ut-Tahrir is not known to have committed any act of terrorism anywhere.  It is of equally little interest to Russia’s FSB and prosecutor that the men themselves are law-abiding members of society and none is accused of an actual criminal offence.  All that matters is that the Russian Supreme Court, for what are believed to have been political reasons, declared Hizb ut-Tahrir ‘terrorist’ back in 2003.  It is also probably no accident that the use of horrifically long sentences against people convicted for supposed ‘involvement’ began in 2014, when Russia needed to manufacture a ‘terrorist threat’ to justify its invasion and annexation of Crimea.

In all such cases, the FSB designates at least one person as the ‘organizer’ of a Hizb ut-Tahrir group (under Article 205.5 § 1 of the Russian criminal code), while the others are changed with ‘involvement’ in the ‘cell’ (Article 205.5 § 2) .  The difference lies basically only in the sentence and the lengths to which the FSB is prepared to go to ensure that the court gives a long enough sentence for its statistics.  This was seen after the first trial of four Crimean Tatars from Sevastopol resulted in the judges lacking the courage to acquit the men, but handing down the minimum sentences and changing the charge against Ruslan Zeytullaev from ‘organizer’ to ‘involved in’.  The lower sentences against the other three men were tolerated, but two new attempts were basically made until the ‘judges’ came up with a 15-year sentence against Zeytullaev.

It has been noticeable since then that the Northern Caucuses Military Court has essentially issued the sentences demanded of them, especially with respect to the person accused of being the ‘organizer’.

On 18 June 2019, 44-year-old Teymur Abdullaev was sentenced to 17 years’ His brother, Useir Abdullaev was sentenced to 13 years; Rustem Ismailov – 14 years; and Emil Dzemadenov and Aider Saledinov to 12 years. Three of the lower sentences were actually one year higher than those asked for by the prosecutor.  Two of the three judges in this case, Anatoly Kolesnik (presiding judge); Igor Kostin and Edward Korobenko, had already taken part in at least one other such ‘trial’ .

Memorial HRC considers Russia’s claim that Hizb ut-Tahrir is a terrorist organization to be unlawful, and notes that it is the only country in the world that claims it to be terrorist.  The Crimean Tatars “were not accused of planning a terrorist attack or making terrorist threats.  There was nothing in the case to suggest that the defendants had committed or planned to committed a violent crime, still less any actions which common sense makes it possible to call terrorist”.

“The injustice and illegality of the persecution of Muslims for alleged involvement in Hizb ut-Tahrir are exacerbated in the case of Crimea by the fact that according to Ukrainian legislation this organization is legal.  According to the prosecution’s documents, the defendants joined Hizb ut-Tahrir entirely legally in 2006 when nobody could imagine that Russia would occupy Crimea and that this would become a ‘crime’”

In Crimea these charges have also become “a weapon against the civic movement of Crimean Tatars, an instrument of repression on ethnic grounds.  These charges are a convenient weapon for crushing what the Russian authorities consider to be ‘not loyal’.  This adds particular tragedy to the persecution of the Crimean Tatars”.

The letters tell them they are not forgotten, and show Moscow that their actions are being followed. Letters need to be in Russian, and on ‘safe’ subjects.  If that is a problem, use the example letter below (copying it by hand, typed letters will also not pass the censor), perhaps adding a picture or photo.   The following addresses are only relevant now, before the appeal hearing.