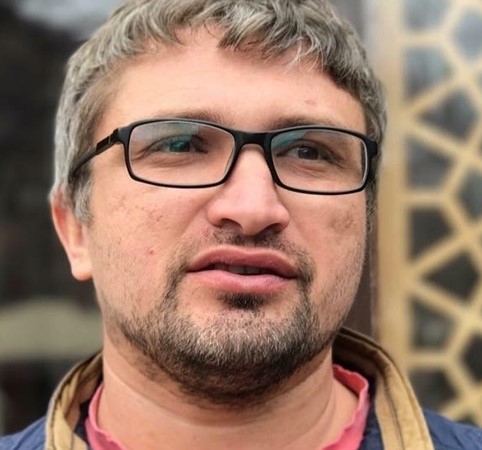 Two FSB officers from Russian-occupied Crimea have given testimony in the trial of Nariman Memedeminov that makes it quite clear that the civic journalist and Crimean Solidarity activist was arrested because of his reports from court hearings in politically motivated cases.  The men’s effective admission is all the more incriminating since the formal charges against Memedeminov are over three innocuous YouTube video clips, two of which far pre-date Russia’s invasion and annexation of Crimea.

The 36-year-old father of three was one of the first people to respond and to visit the court hearings of fellow Crimean Tatars and other Muslims arrested on political and religious grounds.  It was, in fact, evident after the first arrests of four Crimean Tatars on unsubstantiated charges of involvement in the peaceful Hizb ut-Tahrir movement which is legal in Ukraine that very aggressive measures were being taken to try to stop people attending the hearings.  Such measures included an enforcement officer walking around the court premises, openly videoing people who had come to give moral support to the four political prisoners.

Memedeminov refused to be intimidated and continued to play a very active role in the civic initiative Crimean Solidarity that arose in 2016 in response to the mounting number of political prisoners.  He tirelessly attended and reported on court hearings, often streaming material onto the Internet.

That such perfectly legal activities were noticed by the FSB became clear during the questioning of two prosecution ‘witnesses’ from the FSB on 16 July.

Edem Semedlyaev, one of Memedeminov’s lawyers, notes that the two stated that Memedeminov had come to their attention when he began visiting the court detention hearings in the case of the first four men arrested in Sevastopol in January and April 2015.   “They supposedly warned him before his arrest not to take part in terrorist organization, but he didn’t listen”.

There was no terrorist organization, only Hizb ut-Tahrir which Russia has never given any good reason for declaring ‘terrorist’.

Alexander Kozhemyakov, a former SBU turncoat, claimed in court that Memedeminov had gathered supporters of Hizb ut-Tahrir outside courts and “had tried to obstruct court hearings”.

Since early 2017, Russia has been arresting people and often jailing them for 10 or 15 days for merely standing outside places where armed searches are taking place.  Had there been any occasion where Memedeminov “obstructed court hearings”, he would have been arrested immediately.  He was not.

Kozhemyakov also claimed that Memedeminov had not given up his convictions as a member of Hizb ut-Tahrir even though he knew that after March 2014, the organization was banned.

Again, the FSB have brought charges of ‘involvement’ or of ‘organizing’ a Hizb ut-Tahrir group on the basis of harmless discussions on religious subjects, with these charges carrying horrifically long sentences.  Memedeminov is charged with ‘public calls’ alone, and Kozhemyakov’s words in court were without any substance.

Memedeminov was arrested on 22 March 2018 after a search by armed and masked enforcement officers of his home in Kholmovka (Bakhchysarai district).  Using foul language and totally gratuitous force, the men broke down the front door and forced Memedeminov to the floor in front of his terrified children.

The pretext for all of this proved to be three video clips from 2013 – 2014, which the FSB are trying to claim contain ‘public calls to carry out terrorist activities, public justification of terrorism or propaganda of terrorism via the Internet’ (Article 205.2 § 2 of Russia’s criminal code).

This extraordinary charge is based solely on three harmless YouTube videos, two of which were posted  in 2013, well before Russia’s annexation of Crimea.

No terrorism, and in fact Memedeminov was simply reporting a perfectly legal meeting taking place on Ukrainian territory.

The second video  is from 10 October 2013,   It is called ‘Protest gathering instead of a conference’ and reports that people planning to take part in a  Hizb ut-Tahrir were not allowed into the Ukrainian Theatre in Simferopol,   There are no calls to anything in the video, let alone to violence or ‘terrorism’.

As mentioned, only one video post-dates Russia’s illegal annexation of Crimea.

During the hearing on 16 July, Memedeminov questioned the claim in the indictment that, by posting these videos, he was “drawing an unlimited circle of people into the activities of the organization.”  He challenged Kozhemyakov to explain how others who have posted material about such meetings are not considered to be having such an impact on “an unlimited circle of people”.  Kozhemyakov was here, and with respect to other questions, unable to give any real answer.

The ‘trial’ is taking place, like most political trials of Ukrainians at the Northern Caucuses District Military Court in Rostov-on-Don where thus far all the judges have provided the sentences demanded of them.  Memedeminov is facing up to seven years’ imprisonment for three YouTube videos which are still available because there is absolutely no reason to remove them.

By now he is one of nine Crimean Tatar civic journalists, most from Crimean Solidarity, who are imprisoned on fabricated charges.

It is important for him to know that he is not forgotten, and for Moscow to understand that it is being watched.