Poland’s Government uses ‘Public TV’ as a propaganda tool to win the elections. Will the EU react? 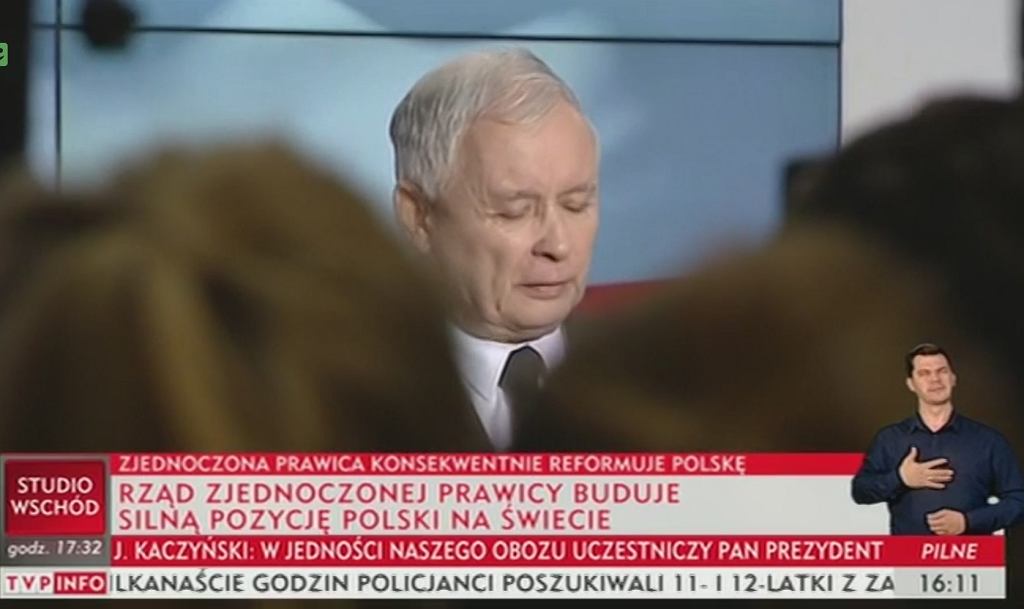 Poland may be in the European Union, but its public television broadcaster, TVP, is using techniques we are more accustomed to seeing on Kremlin-funded Russian television.  The right-wing ‘Law and Justice’ [Prawo I Sprawiedliwość, or PiS] party effectively took over TVP and public radio shortly after winning the 2015 parliamentary and presidential elections.  The members of the National Council of Radio Broadcasting and Television [KRRiT], which is supposed to oversee TVP’s compliance with the requirements for a public broadcaster were all chosen by PiS.  What is more, the head of KRRiT is, in breach of Poland’s Constitution, a PiS politician. If the elections in 2015 were won fairly, there must be very serious doubts about the coming parliamentary elections, if only because the public broadcaster is so clearly serving the ruling party. The stakes are extremely high as the PiS government has already spoken of plans to bring all media under Polish ownership, with this almost certainly aimed at destroying certain independent media.

The following summarizes the most alarming details of three reports about TVP.  The last specifically concentrates on the reporting of the European Parliament elections., but all draw the same conclusions about the methods TVP is using to achieve aims that are totally inappropriate for a public broadcaster. There seems an evident and urgent need for reaction from the European Commission to a situation where the public broadcaster is serving a particular party, with this having serious implications for Polish citizens’ right to free and fair elections

Monitoring of the European Elections[1]

This is the most recent of the three reports, and covers the period from 10-24 May 2019, i.e. up to the European parliamentary elections.  It was aimed at finding out how TVP fulfils (or flouts) its obligation, as per Article 21.1 of the Law on Radio and Television, to ensure “pluralism, objectivity, balance and independence” in its broadcasting. The study concentrated on the main evening news program ‘Wiadomości’.

During the monitoring period, two thirds of the material on Wiadomości (105 out of 153) pertained to the European elections, in which the main rival for PiS was Koalicja Europeiska [hereafter, the Coalition].

69 of the news items were to do with PiS, with 68 of these positive, and one neutral;

33 news items concerned the Coalition, with all of these negative;

There were also two negative reports on ‘Konfederacja’, a far-right party which was probably competing for part of PiS’s electorate.  There was nothing at all about the other parties, although Wiosna and Kukiz15 are not small.

The same situation was seen with the announcements at the beginning of news broadcasts of what was to be in the program.  Of the 30 that concerned the elections, 20 were about PiS and positive; 9 were about the Coalition, with negative overtones.

There was a staggeringly disproportionate amount of coverage, including direct interviews, given to the leader of PiS, Jarosław Kaczyński, with the next two being Beata Szydło, the former Prime Minister leading the PiS list for MEPs, and Zbigniew Ziobro, who is both Justice Minister and Prosecutor General.  Of the ‘top ten’ figures appearing on TVP, only three were not from PiS, including the leader of the Coalition, Grzegorz Schetyna and Donald Tusk, President of the Council of Europe (and former Polish Prime Minister) whom PiS has consistently demonized.

The monitors found that news items which were positive about PiS or negative about the opposition would be grouped together, with at least two, but often three or more items together.  There were, for example, blocs of four negative news items concerning the Coalition on May 15, 17, 23 and 24, and of 6 in a row positive for PiS on 22 May.

The cumulative effect becomes especially pronounced in the last three broadcasting days before the elections,  On 22 and 23 May, blocs of several positive reports favouring PiS were followed by blocs of negatively presented news about the opposition.  On 24 May, the only difference was that the program ended with two PiS-positive items (with a neutral item in between).

During the years of the Viktor Yanukovych regime in Ukraine, monitoring needed to include not only obvious bias, but also the muffling of inconvenient information and manipulative presentation of various events.  The same is, sadly, true of Poland’s TVP under the current government.

Several scandals, including one that showed Jarosław Kaczyński in a very bad light were effectively muffled altogether.  One scandal, involving Prime Minister Mateusz Morawiecki’s highly suspect purchase of Church land and the broader issue of how he has avoided seemingly substantial wealth appearing on his income declarations, did get a formal mention.  In fact, however, the audience saw the headline “Gazeta Wyborcza’s political attack”, but were not given the chance to learn that this was no attack, but good work by investigative journalists exposing at the very least morally suspect dealings.

There was also no mention of a devastating film about paedophilia within the Polish Catholic Church, although the film had been viewed on YouTube by 20 million people and was undoubtedly in the public interest.   Instead, TVP produced a Justice Ministry table of the jobs carried out by convicted paedophiles, with no mention of priests at all.

This is especially disturbing since the Justice Minister (/Prosecutor General) used the opportunity to push through draconian and very ill-advised changes to Poland’s Criminal Code.

Some of the items reported are more reminiscent of Russian propaganda channels during the first months of Russia’s undeclared war against Ukraine, including fake news and people who are not who they say they are.  On 24 May, for example, TVP interviewed a supposed ‘Belgian journalist’, who claimed that Donald Tusk “despises Poland and Poles, and is damaging Poland”.  This supposed ‘Belgian journalist’ was speaking French so most viewers would not have recognized the deceit.  The man was, in fact, Sebastien Meuwissen, a former intern for TVP2, probably living in Warsaw, and certainly able to speak to the correspondent directly.

One of the easiest ways of influencing and / or manipulating an audience is through headlines or captions.  Even viewers who have the sound down will see the captions (in Polish paski) used on TVP.  It is very often clear from the type of language used whether the news item is positive about the government or negative about the opposition, even where the caption does not refer to a political party.

In a statement issued on 31 May, the Society of Journalists said that their monitoring had made it quite clear that “Public Television acted solely as a propaganda body for the ruling party. All of the electoral material on ‘Wiadomości’ promoted PiS electoral slogans or undermined the opposition’s position. Politicians from the ruling bloc had a huge advantage in terms of access to views, and the captions for material read like quotes from speeches at PiS electoral rallies”.

The Society notes that the one billion złoty given by the government to TVP should be counted as part of the PiS election campaign’s funding and warns that such election campaigning by the public broadcaster undermines electoral freedom.

The authors are also highly critical of the negative role played by the National Council for Radio Broadcasting and Television (KRRiT).  This body is obliged by law to oversee observance of impartiality by the public broadcaster, but has totally failed to react to complaints about TVP over the last three years.

“The transformation of these media into a propaganda tube for the ruling party violates equality of opportunities for rival groups and places in question the fairness and reliability of the elections.  It is, after all, not just through the ballot box that these are rigged.”

Two earlier reports were equally devastating.   On 14 March 2019, the Council for the Protection of the Polish Language under the Polish Academy of Sciences sent the Speaker of the Polish Sejm [parliament] its report [2]on the ‘paski’, or captions used by TVP on ‘Wiadomości’.

In his summary of the 150 page report which is based on monitoring covering 2016-2017, the Head of the Council, Dr hab. Andrzej Markowski reported that only 25% of the captions served to inform, with the other 75% mainly used for ‘persuasion’ (influencing the audience); creating reality and for expressive purposes (expressing judgements or emotions). The captions are essentially a tool aimed at influencing the views and judgements of the audience.

The world presented by ‘Wiadomości’ is extremely one-sided, with a dividing line being between the current government and “those who don’t support it”.  The actions of the government and ruling party are presented in a way that is unequivocally positive, while the actions of the opposition parties, civic movements or institutions of the EU are assessed without exception negatively.  Occasionally differing forms of deprecation are used (irony, mockery, etc.)

The nature of the captions, and the linguistic formulations used in them, mean that people have a fixed view of the event even before they find out any details.

The authors have given a much more detailed linguistic analysis of the same basic rule of presentation noted in the Society of Journalists’ report.  Anything about the actions of the government or its system of values is presented in very positive terms (‘reform’, ‘sovereign’; ‘strong’, ‘hero’; ‘patriotic’, etc.).  “Talking about those critical of the government, the terms used are without exception negative: ‘shocking’; ‘scandalous’; ‘provocation’; ‘putsch’, etc).

Gazeta Wyborcza reported drily on 5 July 2019 that it is TVP’s captions that have proven to be under government ‘protection’.  The Council’s report was supposed to have been adopted by the Sejm’s cultural commission, but was not, in a development which is, apparently, unprecedented.

The third report was, in fact, the first chronologically, although the last to finally be made public.  The report was commissioned by KRRiT back in 2017 and prepared by the Pontifical University of John Paul II  [Uniwersytet Papieski Jana Pawła II] in Kraków.  KRRiT then took until May 2019 to post the report[3] on its website, and probably only did so because Gazeta Wyborcza informed its readers on 9 May about the report’s damning assessment of TVP and wrote that KRRiT had been refusing to provide access to it for the last year and a half.

Wyborcza writes that they have received a copy of the report and it absolutely annihilates TVP.

The report, according to Wyborcza, says that if you watch public TV, you can get the impression that Poland is a single-party state.  The report criticizes ‘Wiadomości’ for being one-sided; biased and lacking in pluralism, with one political option, that of the ruling PiS party dominating. It found material which can be considered propaganda (praising the government’s achievements, etc.)

KRRiT published the report on 11 June 2019, though with a description and layout that makes it extremely difficult to understand that it contains strong criticism of TVP.

Such behaviour by the body created to ensure that public television is balanced, impartial and pluralistic is a damning indictment of KRRiT itself.  This supposed watchdog is made up of five members, two of whom were appointed by the PiS-controlled Sejm; one by the PiS-controlled Senate and two by President Andrzej Duda, who was elected from PiS.  As mentioned earlier, its head,  Witold Kołodziejski is himself a PiS councillor (in Warsaw).

The European Commission reacted, albeit rather slowly, to PiS’ attack on the judiciary.  The European Court of Justice has already once concluded that PiS’s Law on the Supreme Court was in breach of EU law and is likely to issue another ruling this autumn.  Control of public media used for propaganda purposes and to win elections is also surely just as much of an attack on democracy and rule of law.

[1]   The Society of Journalists’ report is available here http://towarzystwodziennikarskie.pl/eurokampania-2019/  and on the Stefan Batory Foundation website in Polish http://batory.org.pl/dla_mediow/raport_z_monitoringu_wiadomosci_tvp_w_okresie_kampanii_wyborczej_do_parlamentu_europejskiego