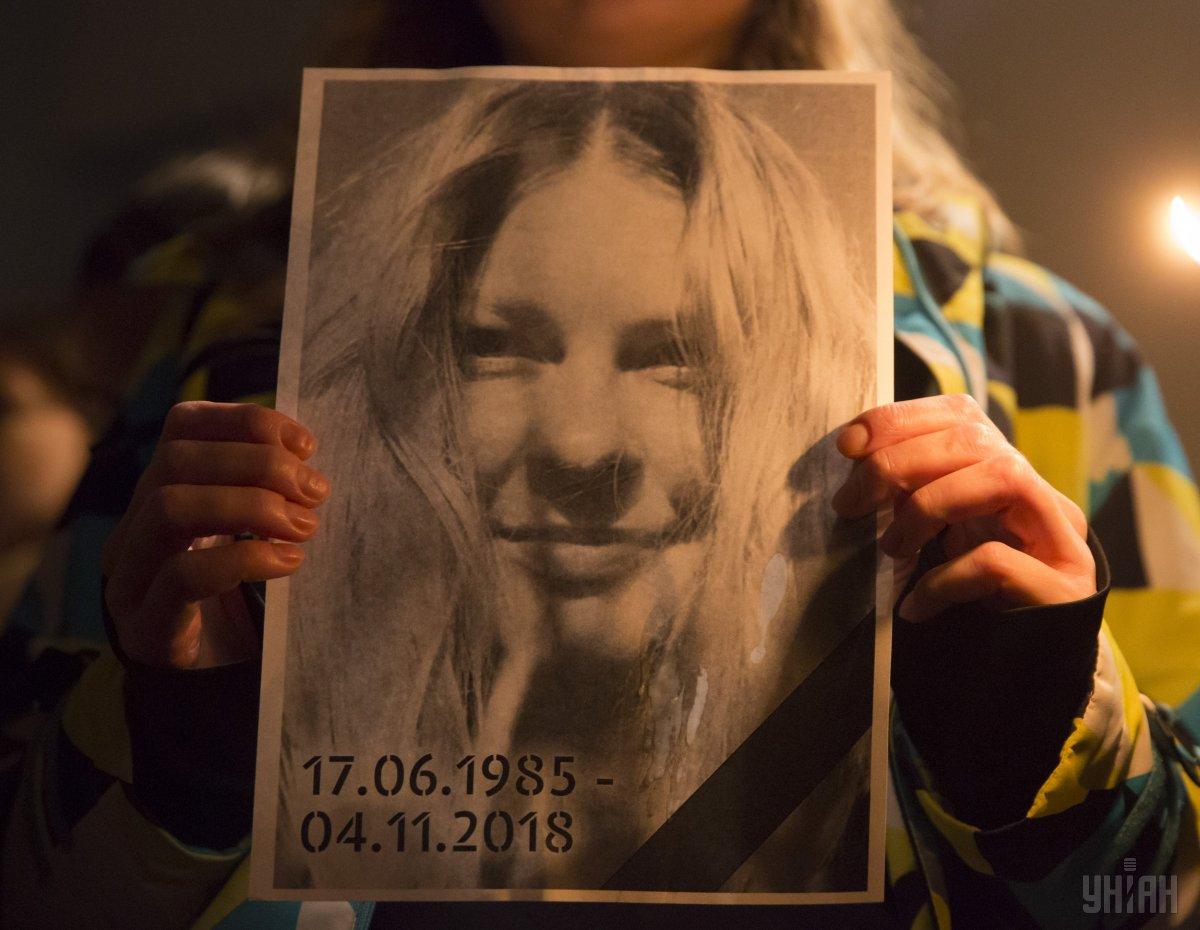 Friends and family of Katya Handziuk, the Kherson activist killed in a savage acid attack, are concerned that the two men suspected of commissioning the crime, may not ever end up on trial.  They are dismissive of claims by the Prosecutor General’s Office that the suspension of the criminal investigation is in full accordance with the Criminal Procedure Code, and point to serious irregularities in the arguments used to justify the move.

Kateryna Handziuk was an aide to the Mayor of Kherson and a civic activist, well-known for her hard-hitting criticism of corruption, especially in the Kherson police force.  She was attacked outside the entrance to her apartment block on 31 July, 2018, with the assailant hurling a litre of the acid used in car batteries at her.  She received burns to almost 40% of her body and needed to be airlifted to a hospital in Kyiv where she underwent 11 operations.  She died on 4 November, aged just 33.

If the first false start in the investigation – the attempt to call the attack ‘hooliganism’ – was quickly abandoned, it was largely thanks to vigilant activists and journalists that the innocent man arrested within days was released and that real suspects were identified.

On 6 June, 2019 five men were sentenced to prison terms over their role in the killing. Serhiy Torbin, the coordinator of the attack, was jailed for 6.5 years; Mykyta Hrabchuk, who carried out the attack, got a six-year prison term. Volodymyr Vasyanovych and Vyacheslav Vyshnevskiy were jailed for four years and Viktor Horbunov for three over their roles in the attack.

The five men were initially charged with murder but reached an agreement with the prosecution and the charge was eventually lessened to inflicting severe bodily harm.

This was to have the controversial effect of reducing the charges against two other men accused of having commissioned the crime.

The two are Vladyslav Manher, former head of the Kherson Regional Council and Oleksiy Levin (Moskalenko).  Manher was soon arrested, though was released from custody almost immediately.

Levin had been identified as a suspect together with the men who have now been convicted of carrying out the crime.  This raised concern as to the reasons for the prosecutor’s delay in seeking to arrest Levin.  Having arrested the other men, they only came for Levin later, by which stage he had fled the country.  It still took the prosecution several months, until January 2019, to get him placed on the wanted list.

Handziuk’s father, investigative journalists and civic activists all suspect two or three other named individuals of involvement in the crime, but they also believe the charges against both Manher and Levin to be warranted.

It was reported by Slidstvo.info on 24 July that the prosecutor had suspended the investigation against both Manher and Levin. The prosecutor asserts that this is because the charges against the two men have been separated out into one criminal prosecution.  The investigation has been suspended since no investigative activities can be carried out against Levin until he’s found.

Yevhenia Zakrevska, the lawyer representing Handziuk’s family, and the Who ordered Katya Handziuk’s murder? civic initiative are not convinced by the arguments given and believe that the prosecutor’s move could lead to both men evading trial.

They point out that the proceedings have been suspended without first extending the criminal investigation which was wrongly due to come to an end on 3 August 2019. . This, they say, is because the investigators and prosecutor have incorrectly calculated the starting point of the investigation, timing it from the arrest of Mykola Novikov.  He was indeed remanded in custody for two months on 3 August, but this was after the court ignored Novikov’s sister’s testimony that they had been on holiday together and that there were other witnesses who could confirm that he could not have carried out the attack on Handziuk.

Since the alibi was finally checked, after the media publicized the story, and Novikov released, it does seem very strange that his arrest should be viewed as the formal starting point.  The activists believe it should have been the point at which Manher was told he was under suspicion.

They further warn that if Manher’s lawyer appeals against the decision (which he appears to intend to do), then the court will likely allow this appeal.  The problem is that this will be after 3 August and it will not be possible to either extend the investigation or hand it to the court.

“Manher and Levin will, therefore, for ever evade liability, simply through the technical conclusion of the investigation timeframes. “

The prosecutor, they add,  must reinstate the proceedings and lodge an application for an extension, or announce that the investigation in Manher’s case is completed and only continue it with respect to Levin.

The Prosecutor General’s Office is claiming that the case against the two suspects is inextricably connected.  Interestingly, Manher’s lawyer, Dmytro Ilchenko disputes this.  Yes, he says, the Criminal Procedure Code does envisage the possibility of suspending a prosecution for the period needed to find a suspect in order to ensure that the person does not simply sit out the investigation period, and then return, knowing that the time allowed for the criminal investigation has elapsed. However it is only suspended in relation to the person in hiding, not anybody else. In other words, they can try to get Levin caught and extradited to Ukraine, without this halting the prosecution of Manher.

The Who ordered Katya Handziuk’s murder? civic initiative recall that President Volodymyr Zelensky stated a week ago that the Kateryna Handziuk case and punishment of the perpetrators was for him a matter of principle.  They call on him to prove this by resolving the problem which they say has arisen because of the outgoing Prosecutor General Yuri Lutsenko.