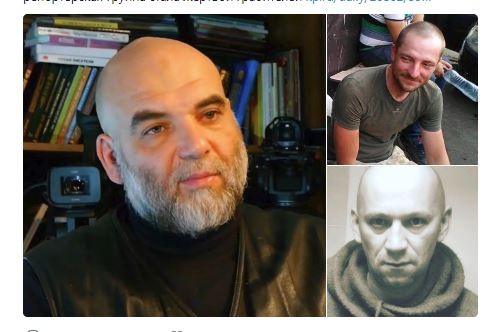 A report published on 30 July asserts that Orkhan Dzhemal and two other Russian journalists were sent to the Central African Republic in July 2018 to be murdered.  The Dossier group present evidence linking the hit job to Yevgeny Prigozhin, the former convict who owns his billions to his links with Russian President Vladimir Putin.  Prigozhin is under western sanctions for his role in financing the notorious Internet troll factory in St Petersburg and the so-called ‘Wagner private military company’ mercenaries who have helped the Kremlin fight its undeclared war in eastern Ukraine, as well as in Syria and elsewhere.

Orkhan Dzhemal; Kirill Radchenko and Alexander Rastorguev had gone to CAR to shoot a film about the activities of the Wagner PMC which appeared to be working side by side with Russian military personnel.  The film was commissioned by an investigation centre and sponsored by Putin’s first political prisoner , Mikhail Khodorkovsky.

The three journalists were shot dead three days after arriving in the country, during an ambush in which they were killed, but their driver, a local, was not.  Only the men’s telephones were taken, despite the amount of expensive equipment they had with them, which is another reason for doubting the ‘official’ Russian version that this was a robbery.

The Dossier report was made public on the first anniversary of the murders, though certain findings, such as the fact that the men had been followed from their arrival in CAR, had been known for some time.  The probe found that the surveillance involved people in top places within Wagner PMC.

Most shockingly, it is believed that the entire trip was effectively a trap, with the investigators naming certain individuals who they believe were involved.  These include Kirill Romanovsky, who is a correspondent from the Federal Information Agency [FAN] which belongs to Prigozhin.

Romanovsky is believed to have put the three journalists in contact with a certain ‘Martin’, whom Romanovsky claimed to have known for a long time and whom he described as a Dutch UN official who knew Africa well.  He was supposed to act as their guide in CAR.

The Dossier investigators believe they have established that this ‘Martin’ never actually existed, hence the fact that the men never communicated with him through any medium revealing his voice.

It was this ‘Martin’ who, via Whatsapp, gave the men details of the driver Bienvenu Duvokhama, who was claimed to have miraculously survived the murderous attack that killed the three journalists. Duvokhama would seem to have been in on the plot at least enough to have taken a strange route in driving the men to the place where they came under attack.  They had seemingly believed that they were being taken to meet up with ‘Martin’.

The driver was also in contact several times during the day that the journalists arrived in CAR with Emmanuel Kotofio, from the local gendarmerie, who had undergone training from Russian military instructors  and who was promoted after the killings. The Dossier team have used telephone billing information to conclude that Kotofio was in close proximity to the Russian journalists from their arrival and believe it is likely that he was the person following them.

Kotofio was also in constant contact while the journalists were in CAR with Alexander Sotov, a former officer of the Interior Ministry’s internal forces and now a member of Wagner PMC.

They also name Valery Zakharov, a Russian military instructor who was earlier linked with Prigozhin’s business interests in St. Petersburg, and who is believed to have been behind deliberate attempts to mislead both Russian and CAR media, pushing the ‘robbery’ version.  ‘Robbery’ is also the explanation given by Russia’s Investigative Committee, who do not appear to have carried out any investigation.  The facts contradict any robbery motive, however the media in Russia simply quote ‘diplomatic staff’ and the ‘local gendarmerie’ to push this version.

Luke Harding, whose reporting for the Guardian hit hard enough for the Kremlin to have had him thrown out of Russia, calls Prigozhin the man leading Russia’s push into Africa. In June this year, Harding wrote of documents which “show the scale of Prigozhin-linked recent operations in Africa, and Moscow’s ambition to turn the region into a strategic hub. Multiple firms linked to the oligarch, including Wagner, are known by employees as the “Company”. Its activities are coordinated with senior officials inside Russia’s foreign and defence ministries”.

It was doubtless both the role the Wagner PMC was playing in the Central African Republic, and the degree to which this was linked with Moscow’s efforts in CAR, that the three journalists were hoping to investigate.

It is widely assumed that Prigozhin is financing the Wagner PMC.  Since all his billions are due to his connections with the Kremlin, that, and his funding of the troll factory, are presumably the least he can do in return.

At the time of the killings, Russian military instructors, advisers and the Wagner PMC had all been active in CAR for many months, reportedly under Prigozhin’s control.

The degree to which the Wagner unit, while purportedly a ‘private’ outfit, in fact cooperates very closely in Russian operations has been seen to Ukraine’s cost in Donbas.

Journalist investigations about people fighting in the Wagner PMC have demonstrated that several men have received fully-fledged Russian military awards for their part in key battles.  The Wagner ‘mercenaries’ also use weapons only available to the military and train at a base adjacent to one run by the Defence Ministry.

The Wagner unit is named after the nom de guerre of Dmitry Utkin, a supposedly former Russian military intelligence [GRU] officer.  The fact that these are no ordinary mercenaries (whose activities Russian law formally prohibits) can be seen in the fact that Utkin and another Wagner leader were among Vladimir Putin’s guests at a Kremlin reception in December 2016.

The death of 52-year-old Orkhan Dzhemal was a particular blow for many Ukrainians.Back in 2014, it was Dzhemal who exposed the lengths to which Russia and the leaders of its proxy ‘republics’ would go for some good propaganda, including sending journalists to be shot.

Dzhemal also spoke the truth about Russia’s treatment of Crimean Tatars, even on Russian national television.  In May 2016, for example, during a talk show on the Kremlin-loyal NTV, Dzhemal reminded his audience “where Russian-speaking Crimeans came from.  Crimean Tatars were deported in 1944, and they put NKVD [secret police] men for their services into their homes”. He had also spoken out, during a Russian propaganda talk show against Russia’s cynical use of terrorism legislation against alleged members of the peaceful Hizb ut-Tahrir movement, especially in Crimea where until Russia’s invasion and annexation, the movement was entirely legal.