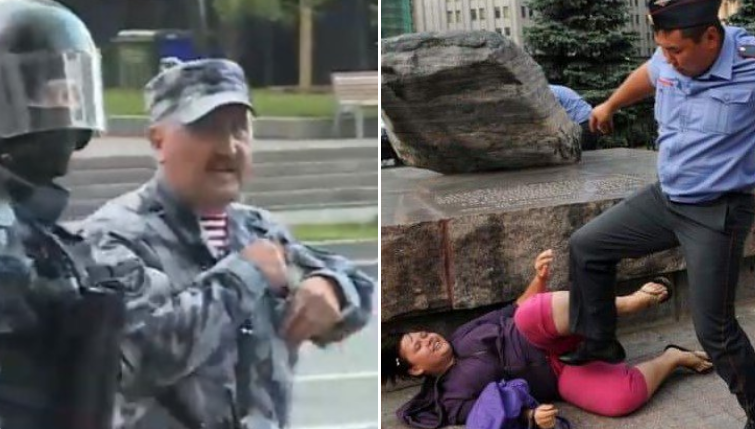 One of the ex-Berkut officers whom Ukraine wants to prosecute for his leading role in the savage attack on Maidan activists on 30 November 2013 has been spotted among the commanders of an equally vicious attack on protesters in Moscow.  This is not the first time that Serhiy Kusyuk has been seen helping to crush peaceful protest in Moscow, and he is not the only ex-Berkut whom Russia clearly finds very useful.  At least one high-ranking Maidan suspect, Petro Fedchuk, was also seen during violent suppression of a demonstration in December 2014.  Over half of the former Berkut officers accused of involvement in the gunning down of protesters during the last days of Euromaidan have been given shelter in Russia, in most cases, fast-track Russian citizenship.  It is not known whether Moscow is using them in a ‘professional’ capacity, but given the jobs given to Kusyuk and Fedchuk, it does not seem unlikely.

Kusyuk’s face was last seen in TV Dozhd’s collection of photos “ from the protests on Russia Day (12 June 2017) before or during which over 1500 people were detained, many violently.

Kusyuk’s involvement is not the only reason that the Russian authorities behaviour on 3 August, and a week earlier, on 27 July, led many Ukrainians to recall the events on 30 November 2013.  It was the Berkut attack on young students which Kusyuk and Fedchuk were in charge of that played a pivotal role in the fate of the Maidan protest.  The savage attack led to numerous civic organizations severing any cooperation with the Ukrainian authorities and, most importantly, it brought up to a million people onto the streets in Kyiv on 1 December.  The protests continued, despite criminal charges, brought against several victims of Berkut violence on 1 December, and then the first deaths of activists in January 2014.

The video footage from Moscow has shown horrific brutality by OMON riot police and Rosgvardia fighters against elderly or very young protesters, demanding only the right to democratic local elections.  As was the case on 30 November 2013 in Kyiv, the regime of Russian President Vladimir Putin is clearly using excessive force in an attempt to terrorize people into abandoning any peaceful protest.

There was one poignant echo from Kyiv during the protests on 27 July in Moscow.  During the attack on Maidan activists, many were given shelter from Berkut batons in St. Michael’s Monastery which specially opened its gates for the fleeing students.  In Moscow last Saturday, at least one priest from the Church of St Cosmas and Damian also seems to have actively helped protesters to safety in the Church.

There were over 1300 people detained on 27 July.  While most faced administrative charges, there have already been some criminal proceedings initiated.  There are no grounds for believing that the criminal charges are based on real offences, nor that justice can be expected from any court until the cases reach the European Court of Human Rights.

The Kremlin is most terrified of Maidan, and the methods it is using are savage.  The images of young protesters being brutally kicked by several riot police officers seem even worse than a week ago.  The numbers of protesters detained was, however, smaller (according to OVD.info at around 11 p.m. the figure stood at 828).  That will probably rise, but the numbers were clearly lower than a week earlier, and the regime’s use of arbitrary violence against the most vulnerable, arrests and criminal charges to frighten people into staying home may soon work.

*  Now behind a paywall, but the photo can be seen here