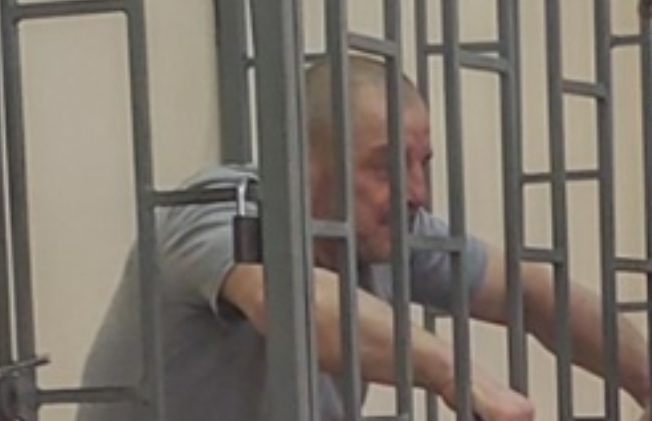 A ‘judge’ in Russian-occupied Crimea has yet again extended the detention of a disabled and gravely ill Crimean Tatar political prisoner for a further two months.  The only result of the cruel court farce in Simferopol on 8 August was that 58-year-old Edem Bekirov was held for 11 hours without food or water, despite the obvious danger to life that this caused a person with diabetes and a serious heart condition.

‘Judges’ in such politically motivated cases merely hand down the rulings required of them, however this cannot absolve Mikhail Sobolyuk, from the ‘Crimean High Court’ of personal responsibility for knowingly issuing a wrongful and potentially fatal ruling. Alexei Ladin, Bekirov’s lawyer, noted that the prosecutor’s ‘argument’ for the application to extend Bekirov’s detention was that the current period was ending.  There was no attempt to provide any reason which would justify holding a gravely ill and disabled man in custody.  Ladin also believes that the ruling was passed before the hearing, and points out that none of the arguments given in court for at least placing Bekirov under house arrest were heeded.  If the appeal against this ruling is rejected, then the next step will be that the Russian-controlled authorities will try to transfer Bekirov to a ‘temporary holding facility’ in Krasnoperekopsk in order for the ‘case’ against him to be heard by the Krasnoperekopsk District Court.

As reported, Bekirov understands that the gruelling move and the conditions in such a temporary centre would kill him, but in a more painful and drawn-out fashion.  He has therefore written a formal statement indicating that, in the event of an attempt to move him, he will go on full hunger strike and refuse all medication. He writes:”Death from hunger in SIZO No. 1 in Simferopol will therefore be less painful.  In view of this, I officially state that, in the event of an attempt to transport me to Krasnoperekopsk, I will declare hunger strike”.

In this case, an amputee, who walks with difficulty and swiftly gets out of breath, has been charged with circulating and transporting more than 10 kilograms of DNT and 190 bullets ((under Article 222 § 2 of Russia’s criminal code).  According to the FSB’s ‘secret witness’ whom they call ‘Memetov’, Bekirov passed the explosives and bullets – all 14 kilogram worth - to him in May 2018. Memetov purportedly placed them in a secret hiding place around Krasnoperekopsk and then in August revealed this place to the Russian FSB and gave testimony against Bekirov.

There have been calls from many democratic countries for Bekirov’s release and on 3 August, Human Rights Watch issued a statement noting that Russia was flouting a European Court of Human Rights order, and calling for him to be given expert medical care.

“Bekirov’s right leg was amputated below the knee in 2005, and he has a difficult-to-heal wound on his stump. He has several chronic illnesses, including type 2 diabetes, coronary artery disease, pelvic floor dysfunction, and chronic neurological conditions affecting his spine and blood circulation, which resulted in partial paralysis of both legs. In January 2018, Bekirov had quadruple coronary artery bypass surgery. He was to have open-heart surgery again in December but was arrested several days before the scheduled surgery.”

“Bekirov requires constant medical attention to address and monitor his spinal and heart conditions and diabetes. According to recommendations of a doctor who previously treated Bekirov, the stump wound requires regular cutting away of dead tissue (debridement) and at least twice-daily dressing change to prevent infection. Bekirov’s lawyers told Human Rights Watch that he is changing the dressing himself and the wound has gotten worse in detention.

He also has had to rely on his relatives to bring him most of his essential medication, because the detention facility provides him only with insulin.

Russian law precludes incarceration of suspects or accused who have certain illnesses or conditions. Several conditions that Bekirov has, including an amputated limb that requires constant medical attention and a severe neurological disease affecting his spine and legs, are included in a 2011 government regulation on this issue.”

“Bekirov urgently needs proper medical care, the European Court has ordered it, and the Russian authorities should do the right thing and transfer him to a hospital. To deliberately refuse to transfer Bekirov, and to choose instead to keep him suffering in detention, is inhuman and degrading, and a blatant violation of their most fundamental obligations.”

If you have not already done so, please sign the petition here and help inform others of Russia’s torture of Edem Bekirov.  Without intervention, it is very likely that he will die.