Ukraine launches spiral of illegality with abduction & expulsion of Georgians linked to Mikheil SaakashviliUkraine may answer to the Court in Strasbourg for abduction-like deportation of three GeorgiansSerious concern about motives as Ukraine detains brother of Mikheil SaakashviliPoroshenko strips political opponent Mikheil Saakashvili of his Ukrainian citizenshipIs President Poroshenko turning to selective stripping of Ukrainian citizenship?Poroshenko law could strip huge numbers of Ukrainians of their citizenshipUkrainian citizens are now a group at risk in Russian-occupied CrimeaRussia backtracks over Ukrainian citizenship in CrimeaRussian, or else: On how Russia is foisting its citizenship in CrimeaCrimean Tatars and others face citizenship dilemmaRussian methods: Calls for Crimea’s return to Ukraine could get you imprisonedMGIMO historian fired for article comparing Crimean annexation to Hitler’s AnschlussInformation channels at warDonetsk Front in Putin’s Dirty WarScurrilous rumours used to spread fear and distrust in Eastern oblastsAutoMaidan activist shot at near ChongarRussian troops already deployed in mainland UkraineThe Crimea is our Home: Get your troops out!Crimean "referendum" a grotesque farceCrimean Tatars call on all Crimeans to boycott "referendum"
• Topics / Law enforcement agencies 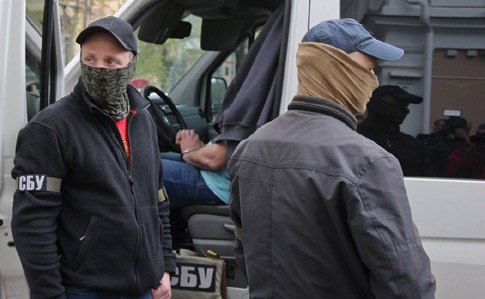 Two years after Mamuka Abashidze was abducted and forcibly deported to Georgia, the Sixth Court of Appeal in Kyiv has ruled that Ukraine’s Security Service [SBU] acted illegally in banning him from the country.   Abashidze, a Georgian military man who had been training Ukrainian soldiers fighting in Donbas was removed, in breach of all procedure, in November 2017. Ukraine’s treatment of him and six other Georgians was widely viewed as part of a politically motivated operation against Mikheil Saakashvili, the former Georgian President and ex-Governor of the Odesa oblast who had become a fierce opponent of Ukraine’s then President Petro Poroshenko.

Abashidze had been working as a volunteer since 2015, training ATO [the Donbas military operation] fighters in combat techniques and also helping in the formation and preparation of the highly trained fighters of the special KORD unit within the National Police.

On 17 November, 2017, armed SBU officers burst into Abashidze’s Kyiv flat.  They handcuffed him, and put tape over his mouth, before silently throwing him into a mini-van and taking him to the Zhulyany Airport, where he was forced onto a State Border Guard Service helicopter and taken to Odesa.  There, once again without any of the procedure for crossing the state border, he was placed on a ferry and taken, under armed guard, to the Georgian port of Porti.  It was only there that he was released.

All of this, Melnychuk notes, was totally illegal.  So too was the failure to even try to explain to Abashidze why a man who was helping Ukraine’s war effort and who was living legally in Ukraine with his wife was being deported.  Not only was he not given the chance to appeal against any ruling, but he was not informed if such a ruling existed, and not given the opportunity to consult a lawyer.

There was, in fact, only an SBU decision, as part of an operation, together with the police, the migration and border guard services, in which seven Georgians, variously connected with Saakashvili, were forcibly removed from Ukraine.

The story really begins in July 2017 when, in a legally extremely dubious move, Poroshenko stripped Saakashvili of the Ukrainian citizenship.  The official reason given was that Saakashvili had supposedly concealed the fact that he was facing criminal proceedings in his native Georgia. This had, however, been common knowledge back in July 2015 when Poroshenko had granted him the citizenship.

By July 2017, Saakashvili had become a vocal critic of Poroshenko and a potential political rival.

Two ‘operations’ followed, on 21 October 2017 and 17 November, in which Georgians associated with Saakashvili were simply seized and removed from the country. Of the three men abducted and deported in October, one – David Makishvil – had, like Abashidze, being using his military expertise to help Ukraine’s military in Donbas.  Mikheil Abzianidze was living legally in Ukraine, together with his wife, who has Ukrainian citizenship and their child. Only one of the three, Georgy Rubashvili, had reportedly overstayed his permit to be in Ukraine, but there is due procedure for removing somebody under these circumstances, and this was categorically not followed.

Then on 17 November, the SBU announced that 8 people, whose activities “run counter to Ukraine’s national security interests”, had been removed.  No names were provided, however the Interior Ministry publicly reported the removal of four men, whom it said were involved in criminal gangs.  The aim was almost certainly to convince the public that if these four named individuals were criminals, then there must have been grounds for removing the other four men.

As we see, a Ukrainian appeal court has now at least concluded that there were no grounds for refusing Mamuka Abashidze entry to Ukraine.  It seems very likely that either a Ukrainian court or the European Court of Human Rights will eventually find that the rights of journalist Tamaz Shavshishvili; former Saakashvili guard Zurab Tsyntsadze and Vano Nadiradze were also violated.

Melnychuk notes that Ukrainian courts are often loath to take the side of people who have been deported or who are facing such deportation.  This case has also been an uphill battle which is by no means over. In May 2018, the Luhansk District Administrative Court found that the Migration Service’s cancellation of Abashidze’s residence permit had been illegal, however on 17 September 2018 that ruling was revoked by the Donetsk Court of Appeal.  At the end of March 2019, the District Administrative Court in Kyiv also refused to find Abashidze’s detention, removal from Ukraine and ban on re-entry unlawful.

Now, however, the Sixth Court of Appeal has at least acknowledged that the SBU’s decision to ban Abazhidze from entering Ukraine was illegal.  Unfortunately, it did not allow the other applications, namely to recognize the actions of the SBU, the State Migration Service, the State Border Guard Service and the National Police in forcibly removing Abashidze illegal. Melnychuk will be appealing against that refusal to the Court of Cassation.

It remains likely, therefore, that it may end up being the European Court of Human Rights that is forced to give the final word on the SBU and other Ukrainian bodies’ shocking treatment of Abashidze and the other men effectively abducted and illegally deported from Ukraine.