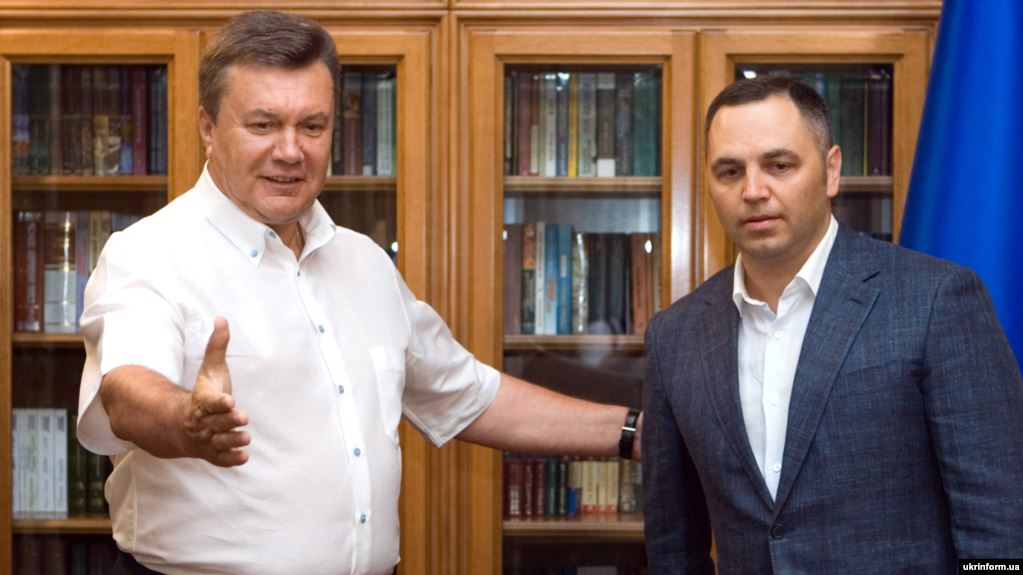 Andriy Portnov, a former adviser to ex-President Viktor Yanukovych and First Deputy Head of his Presidential Administration, has been awarded almost seven million UAH in damages purportedly inflicted upon his reputation by the Ukrainian authorities.  The ruling, which will presumably be appealed,  was passed by Serhiy Vovk, the Pechersky District Court judge who gained notoriety under Yanukovych for the politically motivated prison sentences he passed on two members of Yulia Tymoshenko’s government, Yuri Lutsenko and Valery Ivashchenko.

Portnov may not have fled Ukraine with Yanukovych on 21 February 2014, after the gunning down of Maidan supporters, but he did leave the country at around the same time.  Unlike Yanukovych, he only remained for a while in Russia, and then moved to Vienna in Austria, having received a Schengen visa even before the EU sanctions against him were annulled in October 2015.  He returned to Ukraine on the eve of Volodymyr Zelensky’s inauguration as President, and promptly lodged the first of many demands for criminal proceedings against ex-President Petro Poroshenko, as well as the latest of many civil suits.

Portnov’s active role during the Yanukovych regime, and his believed involvement in the 16 January 2014 ‘Dictatorship laws’ make his current attempts to accuse Poroshenko of ‘treason’, and to present himself as a victim of defamation seem at very least startling. Unfortunately, however, the few attempts to hold him to account for his actions were half-hearted, and fizzled out.  It is presumably the lack of any court ruling, or even clearly articulated charges,against him, and his undisputed legal skills, that he is now using against the Ukrainian authorities.

In the defamation suit which he won on 2 August 2019, Portnov demanded almost 7 million UAH from the Justice Ministry and State Exchequer which he claimed to be in compensation for damage to his reputation.

According to Slidstvo.info, who cited Olena Isaevska, Portnov’s lawyer (and sister), the court was told that the Canadian government had imposed sanctions against Portnov on the basis of a letter from the Ukrainian Prosecutor General to the Canadian Ambassador in March 2014.  The lawyer asserted in court that this had accused Portnov of violations of the law.  The suit itself asserts that, in the letter, Portnov was called ‘a suspect’ and that this was the reason he had ended up under Canadian sanctions.  Isaevska says that Portnov only briefly had suspect status.

In fact, judging by an earlier, successful, challenge which Portnov lodged against being placed under EU sanctions, the Prosecutor General’s Office may have made other assertions as well in its letter.

It is worth considering the ruling which the General Court in Luxembourg passed on 26 October 2015 with respect to the EU imposing sanctions, including a freeze on Portnov’s assets.

The Court pointed out that the letter of 3 March 2014 had been the only piece of evidence submitted to the Council before it made its decision to impose sanctions and that the lawfulness of that decision needed to be assessed in the light of that evidence alone. It noted that the letter “contains only a general statement to the effect that the applicant, among other former senior officials, was the subject of an inquiry into acts, not further specified, involving the misappropriation of funds, and concerning the illegal transfer abroad of those funds. It does not give any details of that conduct or of the applicant’s responsibility for it.

The Court concluded that there had not been “any information regarding the acts or conduct specifically imputed to the applicant by the Ukrainian authorities” and that it was not even clear that when the sanctions were applied, Portnov had been “the subject of genuine ‘criminal proceedings’, or even a mere preliminary inquiry.”

The Court therefore annulled the European Council decision of 5 March 2014 regarding sanctions against Portnov.  It did, however, only order that the EU Council pay Portnov’s cost, not that it pay ‘compensation’.

The representatives for the Justice Ministry; the Exchequer; the Prosecutor General’s Office and Interior Ministry had all asked the court to dismiss the suit as lacking any substance.  Slidstvo.info also reports that the Prosecutor General twice applied for the judge’s withdrawal from the case, due to doubts about his objectivity.  This seems to have been a decision left to Vovk himself, and he duly rejected the application.  He has now gone on to fully allow a very significant compensation claim over what Portnov argues was damage to his reputation.

Under Yanukovych, Ukraine gained an extremely bad reputation for ‘selective justice’, with certain judges, in particular, Serhiy Vovk and Rodion Kireyev, playing a particular active role. Vovk was directly responsible for the internationally condemned prison sentences passed on Lutsenko and Ivashchenko, while Kireyev was the face behind the grotesque trial and eventual 7-year prison sentence passed on Tymoshenko.

Kireyev fled to occupied Crimea or Russia, and is probably still on Ukraine’s wanted list.  The situation with Vovk proved much less straightforward.  Attempts were initially made to remove his judges’ immunity and to prosecute him over a ruling by which, according to the prosecutor, he had illegally deprived somebody of their property. He was even suspended from his position in 2015 but then reinstated in 2016.  The judicial watchdog CHESNO has a whole dossier on Vovk, with disturbing information under three separate titles:  Involvement in corrupt dealings and crimes; unexplained property and dubious rulings.

The compensation awarded in this case is exceptional, but not Portnov’s success at winning defamation cases against the Prosecutor General’s Office, which has shown a penchant for making public accusations, without backing them with hard evidence. .  Back in November 2015, the website Law and Business reported that Portnov had won his eighth claim for defamation.  By now the figure is certainly higher, while there is little or no evidence that the public prosecutor has taken any real steps in carrying out proper criminal investigations that quietly lead to a result.