Ukraine to answer to ECHR for five years’ sabotage of Maidan investigations33 Maidan crime suspects still work in law enforcement bodies, 10 in high positionsKey evidence against Maidan killers in danger of being destroyedWhy is Lutsenko trying to destroy the only department truly investigating Maidan crimes?Anger over acquittal of ex-Berkut officer charged with torturing Maidan activistsSentence passed over savage killing of Ukrainian human rights lawyer Iryna Nozdrovska Russia extends terror and abductions from occupied Crimea and Donbas to all of Ukraine US imposes sanctions on former Yanukovych aide Andriy Portnov for corrupting Ukraine’s courts Yanukovych phoned Russian President Putin 12 times during the mass killings on Maidan EU sanctions ‘judges’ and others involved in the repression Russia brought to occupied Crimea A brief description of the KHPG strategic litigations in the first half of 2021Venediktova drives out key figure helping Ukraine achieve justice over crimes in Russian-occupied Crimea and Donbas Russia lodges a surreal ECHR inter-state claim against Ukraine over MH17, water for occupied Crimea & "discrimination"Remember 16-year-old Stepan Chubenko and how Russia protected his Donbas militant torturers and killers End to 7 years of impunity for savage murder of Ukrainian journalist?Ukrainian tortured in occupied Donbas and sentenced to 14 years for ‘spying for Ukraine’ First Berkut police jailed for involvement in savage dispersal of Maidan activists June 3 Letter to the Members of the Verkhovna Rada of UkraineRussian Terror and State-sponsored Abductions. Where is Crimean Tatar activist Ervin Ibragimov? Grundfos and Siemens violate EU sanctions, propping up Russia’s occupation of Crimea
• Topics / The right to life
• Topics / Human Rights Violations associated with EuroMaidan 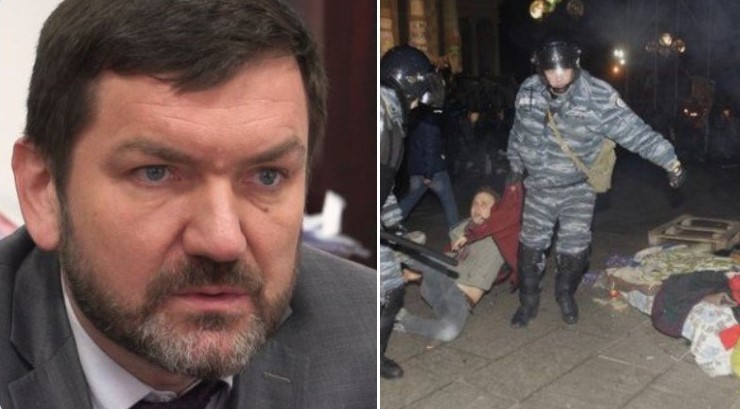 Prosecutor General Yuri Lutsenko has closed part of the Special Investigations Department responsible for the only progress made to date on prosecutions for crimes against Maidan activists.  The news has elicited concern among those representing the victims of such crimes or the families of slain activists and has been fiercely condemned by the Head of the Department, Serhiy Horbatyuk.

This is the second of two related orders. Through the first, issued on 7 June, Lutsenko created a new ‘Department for the organization and procedural management in criminal proceedings of special category crimes’.  At the time, the Advocacy Advisory Panel, whose lawyers represent the families of Nebesna Sotnya (slain Maidan activists) was broadly positive.  This, it said, would create a department of prosecutors who would carry out procedural management of Maidan investigations and represent the public prosecutor in court.

There was, however, a degree of scepticism.  Would the department be headed by Serhiy Horbatyuk, Oleksiy Donsky, and / or other professional and committed prosecutors, or by somebody from the Prosecutor General’s Office management put there to act as ‘supervisor’?

The negative expectations seem to have been warranted. On 8 August, Lutsenko signed an order essentially dissolving the group of prosecutors headed by Oleksiy Donsky.  Instead of getting Donsky to head the newly formed  ‘Department for the organization and procedural management in criminal proceedings of special category crimes’, he has simply been removed. In an interview to Hromadske.ua, Horbatyuk asserted that the Prosecutor General’s Deputy Serhiy Kiz plans to appoint people subordinate to him to hold managerial posts within the department.  These will be people who have not been involved in Maidan cases.

Horbatyuk warns that “this destroys the existing and coordinated mechanism for investigation and will lead not only to procrastination, but to the elimination of criminal investigations.” He suggests that this is, in fact, the aim.  Once they have removed people like Donsky, him or the others working with them, it will be much easier to exert influence on the investigation. And there will cease to be any movement on such prosecutions.

Hromadske.ua  notes that the Prosecutor General’s Office denies such accusations, and counters them with criticism of Horbatyuk.  Larisa Sarhan, the PGO press officer claimed that Lutsenko considers it urgent to complete investigation into Maidan crimes, and that it was Lutsenko who “achieved” the conviction of former President Viktor Yanukovych.  Why, she asks, did Horbatyuk not begin the trial in absentia of Serhiy Kusyuk, the former Berkut officer wanted on charges linked to the violent dispersal of young Maidan activists on 30 November 2013 and recently spotted using similar methods against protesters in Moscow.

The answer to Sarhan’s largely rhetorical questions has been given many times, and ignored by Lutsenko and his people.  The legislation introduced to enable trial in absentia has many failings which could later result in Yanukovych’s conviction for state treason being quashed.  Yanukovych’s lawyers have already made it clear that they are collecting all statements by former President Petro Poroshenko, Lutsenko and others where it is openly stated that legislation has been drawn up and passed “in order to convict Yanukovych in his absence”.

Concern has long been expressed by lawyers and activists campaigning for real accountability for Maidan that Lutsenko was concerned only with getting a high-profile conviction of Yanukovych at any cost, in order to boast that he and Poroshenko had kept their promises.

The Prosecutor General’s Office often comes out publicly with high-profile accusations or even initiates criminal cases, which are soon afterwards found to have been shelved.  This is one of the reasons why somebody like Andriy Portnov, the former Yanukovych aide, has been able to win so many defamation suits against the Prosecutor’s Office and against Ukraine in general.

Not only have high-profile cases fizzled, but the concentration of publicity-winners has been coupled with ‘restructuring’ or other measures which actively obstruct and limit the Special Investigations Department.

It is important to note that in the ensuing war of words between Lutsenko and Horbatyuk, the lawyers and family members most intent on ensuring justice all support Horbatyuk and his Department for Special Investigations. It was due to pressure from the victims, lawyers and civic society that this Department was finally created in January 2015, and they believe that they have the Department to thank for the progress there has been.

In an open appeal to Lutsenko in June 2018, the Advocacy Advisory Panel condemned a planned ‘reorganization’ of the Department as a step to both winding down investigations into Maidan crimes, and abandoning those prosecutions that have already been passed to the court”.

Lutsenko’s first such ‘reorganization’ was announced on 24 October, 2016.

Horbatyuk remained in charge, but lost a considerable number of investigators and prosecutors who were redeployed in a newly created department on investigating organized crime.  The Advocacy Advisory Panel note that assurances that this department would also be involved in investigating Maidan crimes came to nothing. Instead new prosecutions were not passed to the court; people were not informed that they were under suspicion; and those cases that had already reached the courts remained where they were, without any progress being made.  This, they wrote, was an example of how Maidan cases get investigated in other departments – they don’t.

The next restructuring in the middle of 2018 was seen as similarly destructive.

During a press briefing on 19 February 2019, lawyers representing Nebesna Sotnya stated that they were considering an application to the European Court of Human Rights over Ukraine’s failure to carry out an effective and thorough investigation into the Maidan killers in January and February 2014.  This included through the effective sabotage of the Special Investigations Department.  Cases have been arbitrarily taken away from it just when they appeared to be making progress.  The number of investigators has also been reduced, and the Department has faced other organizational obstructions, and the staff were deprived of any social and labour guarantees at all.

The obstruction is also from the SBU and Interior Ministry, as well as from the courts.

ith very few exceptions, there have been no real attempts to have judges who passed knowingly wrongful rulings during Maidan dismissed.  The High Council of Justice has taken no measures to investigate situations where judges have since passed extremely questionable rulings which, for example, enabled a main suspect of the killings, Dmytro Sadovnyk, to flee justice, or where they are obviously dragging out proceedings.

The Special Investigations Department has carried out investigations into 4,100 episodes linked with Maidan.  There have been 52 convictions, with only nine people sentenced to periods of imprisonment.  This is despite the fact that 104 Maidan activists (and 17 Berkut officers) were killed during the last month of the protests, most gunned down on 18 and 20 February.