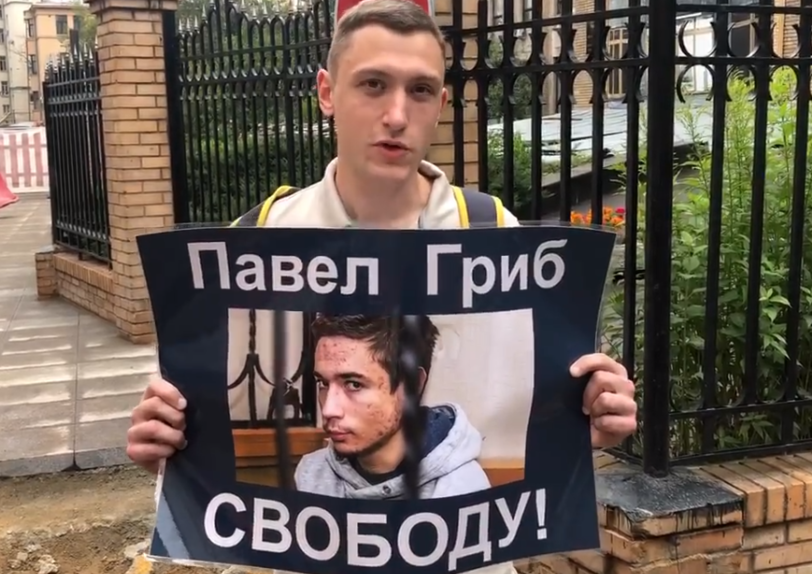 Russia has begun arresting people under an internationally-condemned law which effectively criminalizes peaceful protest and, typically, the latest victim is a young Russian who has tirelessly defended the ever-rising number of Crimean Tatar and other Ukrainian political prisoners.  Konstantin Kotov was arrested on 12 August and remains in custody, with a detention hearing due on Wednesday morning.

Kotov is charged under Article 212.1 of the Russian Criminal Code, introduced in July 2014.  That envisages a sentence of up to 5 years if a court has issued three rulings on administrative offences within 180 days.  Under the present regime in Russia and Russian-occupied Crimea, you can find yourself detained and prosecuted for purported ‘infringement of the rules for holding a public event’ even for holding a single-person picket although this is supposed to be the only remaining legal form of peaceful protest.

The first prosecution under the article was that of Russian civic activist Ildar Dadin, who was sentenced on 7 December 2015 to 3 year’s imprisonment Dec 7, 2015 to 3 years’ medium security imprisonment.  There were strong grounds for believing that his prosecution and the harsh sentence for peaceful protest were due to Dadin’s active support for Euromaidan, his opposition to Russia’s aggression against Ukraine and support for Ukrainians held prisoner in Russia and occupied Crimea.

His case gained international publicity, especially after he was subjected to torture and then faced reprisals for having talked about his treatment. The Kremlin constantly ignores calls for it to end equally and more outrageous political persecution.  Whatever the reason, it clearly did decide that there was more to be gained from releasing Dadin, than from the scandals over his torture and the bad press over the absurd charges.

In February 2017, Russia’s Supreme Court revoked the sentence against Dadin and recognized his right to ‘rehabilitation’, with this meaning a formal apology and – in theory – compensation.

At almost the same time, the Constitutional Court decided in a very long judgement that the article did not breach Russia’s Constitution, but it did recommend key amendments and order a review of Dadin’s case.  The Court stated that criminal liability for infringements at public events should be commensurate with the danger to the public of the actions.  Criminal liability should not be applied in cases where the infringements were merely formal and caused no harm.  The court needed also to provide the person’s intent to infringe established procedure for organizing or holding a public event.

The advice was heeded for some time, however is now again being ignored, with Moscow adding 212.1 charges to its substantial arsenal of weapons against people asserting only their constitutional rights.  According to OVD.info, Kotov is the third person to be charged under Article 212.1 over the last year,  The first three ‘episodes’ were: his detention and 5 day arrest after a meeting in defence of the new generation (about political prisoners) outside the FSB buildings on Lubyanka on 13 May; his detention and fine at a protest in support of Meduza journalist Ivan Golunov on 12 June;  he was then prosecuted for merely posting a call on Facebook to come out in protest at the Moscow authorities’ blocking of real opposition candidates for the coming city council ‘elections’.  This meant that his detention on 24 July and arrest for 10 days gave formal grounds for bringing criminal charges under Article 212.1.

The fact that these are strictly formal is only accentuated by the circumstances of the last prosecution.  Kotov and another activist were arrested leaving their apartment blocks.  In Kotov’s case, two protocols were drawn up.  In one, he was accused of organizing a protest against the refusal to allow opposition candidates to stand for election, although such ‘organization’ lay only in calling on people via the Internet to attend a protest on 19 July.  The second was over alleged failure to obey a police officer – he supposedly refused to show the latter his passport.

In any democratic country, none of the above would constitute offences, nor would they be treated as such by the courts.  In Russia, ‘judges’ provided the administrative ‘convictions’ required, with four of these now looking set to turn into a criminal prosecution with a potential five year sentence.

It is probably no coincidence that, like Dadin, Konstantin Kotov is very much a friend of Ukraine, and all those Ukrainians facing persecution in occupied Crimea and Russia. During the appeal hearing against Pavlo Hryb’s politically motivated 6-year sentence, Kotov stood with a photo of the young student who has potentially life-threatening medical problems, and a demand for his release.

Lutfiye Zudiyeva, one of the coordinators of Crimean Solidarity, recalls how Kotov came to support the huge number of Crimean Tatar activists detained for peaceful solidarity with four political prisoners on 10 and 11 July this year.  He even ran to the police building where the detained men were being forced into a police van and gave them biscuits, fruit juice and sweets. Zudiyeva notes that he waited until late in the evening because “he couldn’t do otherwise”.

Kotov has shown Ukrainian political prisoners and victims of persecution that they are not forgotten and that there are Russians who will speak out in their defence.

He now needs our support.