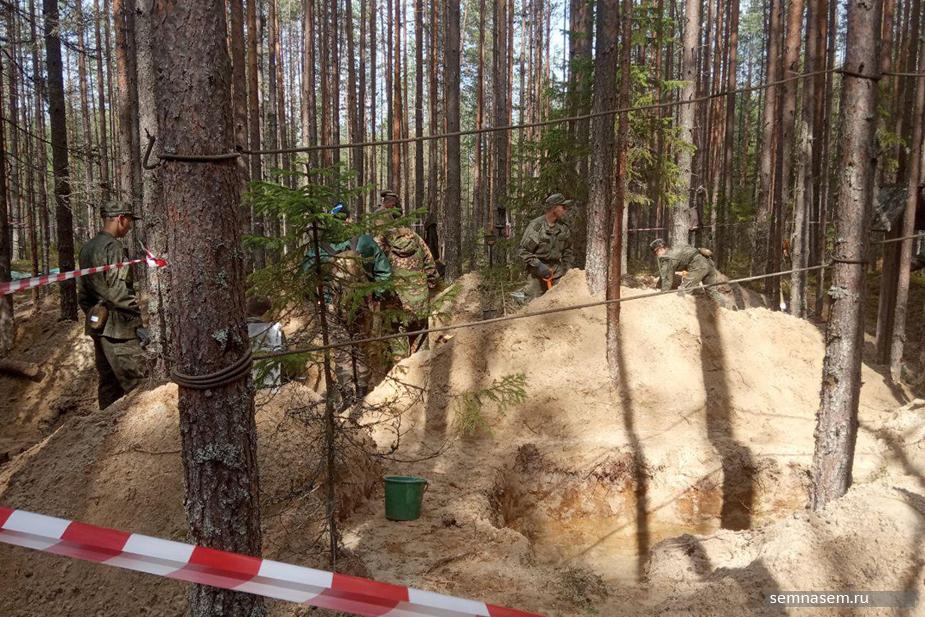 New excavations are underway at the Sandarmokh Clearing in Karelia which holds the last remains of thousands of victims of the Great Terror of 1937-38.  Any  pretence that the excavations by a body linked to the Russian minister of culture are not aimed at rewriting history has been dispelled by a letter from the Karelian ministry of culture.  This openly questions the internationally recognized fact that the mass graves are of victims of the Terror, and, since this “damages Russia’s international image”, asks for another hypothesis, unbacked by any documentary proof, to be ‘investigated’.

Journalists trying to confirm the authenticity of the letter have found that the ministry does not answer its phones.  The letter itself was first made public by Yelena Kondrakhina, a member of the St. Petersburg branch of the Memorial Society who is present at the site of the excavations, as an observer.  She told a Meduza journalist that the letter was among documents which Sergei Barinov from the Russian Military History Society had shown journalists.  She had managed to quickly photograph the letter, before it was taken away.

The document certainly appears to be an authentic letter from Sergei Solovyov, Acting Minister of Culture for Karelia to the head of the Russian Military History Society Alexander Barkov, and is dated 19 July 2019.  It asks that the Society carry out a “comprehensive” study of the Sandarmokh Memorial Complex to find confirmation that the site contains the remains of Soviet citizens held in Finnish concentration camps during WWII.

“The Memorial Society has put forward the idea that the Sandarmokh Hearing contains the graves of victims of political repression in 1937-1938 which , with the support of Russian and foreign forces with an interest in this, has become the paradigm of public awareness both in Russia, and abroad. According to their estimates up to 9,5 thousand people are buried in this place (which is seriously over-estimated). The idea of the graves at the Sandarmokh Clearing of victims of political repression is actively used by a number of countries in destructive information and propaganda actions in the field of historical awareness”, Solovyov writes. He claims that “speculation around the events at the Sandarmokh Clearing not only damages Russia’s international image, but also strengthen an unwarranted sense of guilt in public consciousness before those representatives of foreign countries who were supposedly executed there”.  Such ‘a version’, he alleges, “makes it possible to put forward unfounded claims against our country and is a consolidating factor for the anti-government forces in Russia.”

All of the above purportedly demonstrates the topicality of the “task of establishing the truth about contentious historical issues”.

“Despite the version circulated by the Memorial Society about the events of the middle of last century at the Sandarmokh Clearing, in academic circles (the Karelian Scientific Centre of the Russian Academy of Sciences; the Petrozavodsk State University), there are alternative points of view.”  The letter goes on to mention “a number of authoritative Karelian historians”  - while naming just two men, Yuri Kilin and Sergei Verigin  - who believe that the site may contain the graves of up to 500 Soviet POWs who had been held in Finnish captivity. It also asserts that unnamed Finnish historians have confirmed that Soviet POWs were executed by Finnish soldiers.

The author claims that the point of view presented by Kilin and Verigin “is actively put forward in the academic community and in Russian and foreign media, including within the framework of international academic conferences” and that this has caused concern in Finland.

The term “a number of academics” is a serious exaggeration since there were just two historians, both of whom are members of the Russian Military History Society, and there seems little to suggest that their ideas have gained traction in the academic world.

The reasons why the hypothesis about Soviet POWs has not been taken seriously are clear. The FSB and Russian Military History Society have repeatedly refused to produce any evidence to back claims that the bodies of Soviet POWs are buried at Sandarmokh.  In an open letter to the Russian Prosecutor General, the St. Petersburg branch of Memorial points out that:

“The authors of this hypothesis cannot provide one piece of documentary evidence to back it and cannot name the people whom they are looking for in the mass graves at the Memorial Cemetery, not one name.

Unlike the Russian Military History Society, we can name 6,241 people killed by the NKVD near Medvezhya Gora in 1937-1938, and are in a position to provide documentary proof that they were shot and bury specifically there, in the clearing which now bears the name ‘Sandarmokh’. “

This is not just a senseless attempt to prove the unprovable, the authors say, but an unprecedented act of vandalism and desecration of graves.  It is an affront to the memory of the 6,241 people and their descendants.

Under Vladimir Putin, there has been a steady move towards rehabilitation of Joseph Stalin and the Cheka / NKVD / KGB, coupled with moves to relativize their crimes and minimize any discussion about the victims.  The first efforts led to the effective destruction of the museum complex at Perm-36, one of the most notorious camps holding political prisoners.  With Sandarmokh having become a place of pilgrimage for Ukrainians, Poles and people from very many other countries, and with International Days of Remembrance for the Victims of the Great Terror held every year, it was probably inevitable that this would be the next target.

The efforts to cast doubt over historically documented facts about Sandarmokh are all the more sinister as they have coincided with the prosecution on politically motivated charges of Yuri Dmitriev, the world-renowned historian of the terror and head of the Karelian branch of Memorial.  It was he, together with colleagues from Memorial, who first discovered the mass graves, and he worked tirelessly to identify the victims.  Dmitriev’s arrest in December 2016 on absurd ‘child pornography’ charges was almost immediately followed by a film on state-controlled TV trying to discredit both Dmitriev and Memorial.  The case against him was so obviously concocted out of nothing and demolished by experts, that the authorities appeared to back off, with a first – unheard-of – acquittal.  This was probably done deliberately to deflect the publicity the case had caused, and the acquittal was swiftly overturned and Dmitriev arrested on more or less the same charges.  His ongoing imprisonment has been very widely recognized as linked with his work as a historian of the Terror and with the current regime’s antagonism towards Memorial, not with any crime. The same is almost certainly true of the arrest on similar charges, and 9-year sentence passed on another historian, involved with Sandarmokh, Sergei Koltyrin.

In June 2016, six months before Dmitriev’s arrest, Yuri Kilin, a history professor at the Petrozavodsk State University published an article suggesting that Sandarmokh might hold the last remains of Soviet prisoners of war killed by Finnish soldiers during the Second World War.

Although the article cited only documents recently published by Russia’s FSB [security service] and no substantive evidence, the pro-Kremlin Izvestia almost immediately published an article claiming that “Memorial’s findings about repression in Karelia may be reviewed”.  TV ‘Zvezda’, a channel linked with Russia’s Defence Ministry, reported Kilin’s article, embellishing it with the claim that “thousands” of Soviet prisoners of war could be buried at Sandarmokh and with an effective attack on Memorial.

Kilin’s position was taken up by his university colleague and fellow member of the Russian Military History Society, Sergei Verigin.  It was the latter who first proposed the excavations which began in August 2018.

Although no proper evidence to back the claims had been proposed, the excavations began again this week, on 12 August.  Memorial and other civic activists have called on anybody who can to go as observers to Sandarmokh to ensure that nothing, apparently backing the Soviet POW claims is simply planted.

It is no accident that the two historians pushing the POW claims are both members of the Russian Military History Society.  The latter was created by President Putin in December 2012, in order to “consolidate the forces of state and society in the study of Russia’s military-historical past and counter efforts to distort it”.  It is headed by Russia’s Minister of Culture Vladimir Medinsky, and has initiated such controversial moves as the creation of a museum and bust of Stalin in Khoroshevo (Tver oblast).  Medinsky’s article on that occasion is part of a mounting tendency by the Putin regime to whitewash a dictator guilty of numerous crimes against humanity and the death of millions.  The Society and the Russian leaders behind its creation and activities are intent on ‘proving’, by whatever means needed, that the estimates of victims of the Terror are at very least exaggerated, and that the Soviet citizens slaughtered and hurled into mass graves were not killed by fellow Soviet citizens. This act of barbarism seems to be part of an operation to rehabilitate the perpetrators, deny or blame others for the death of their victims and, in general, to rewrite history so that it doesn’t “damage Russia’s international reputation.”

There is a petition demanding that the excavations are stopped here 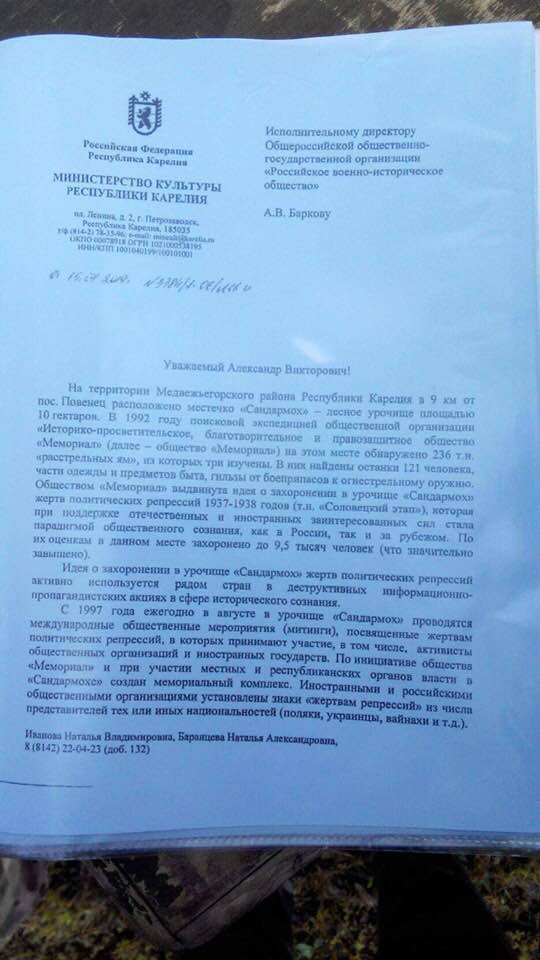 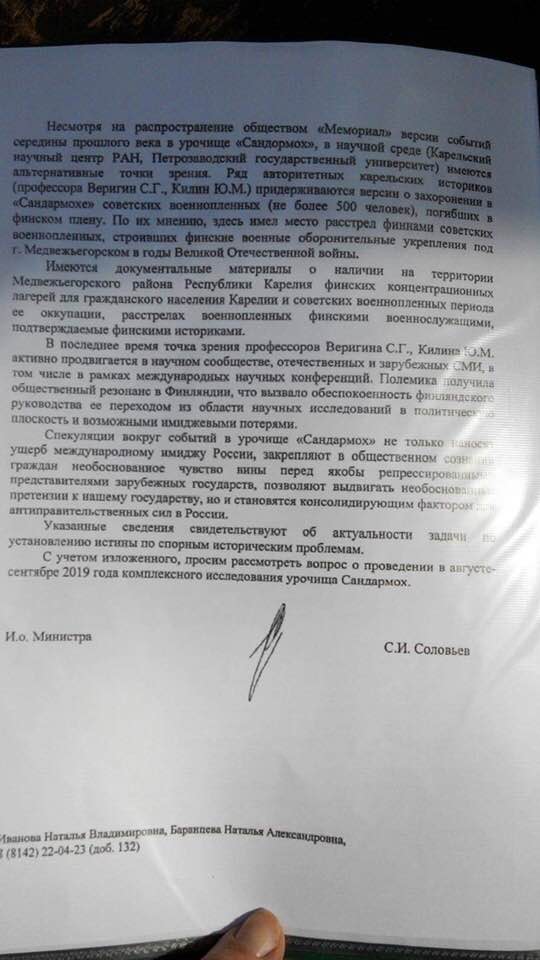