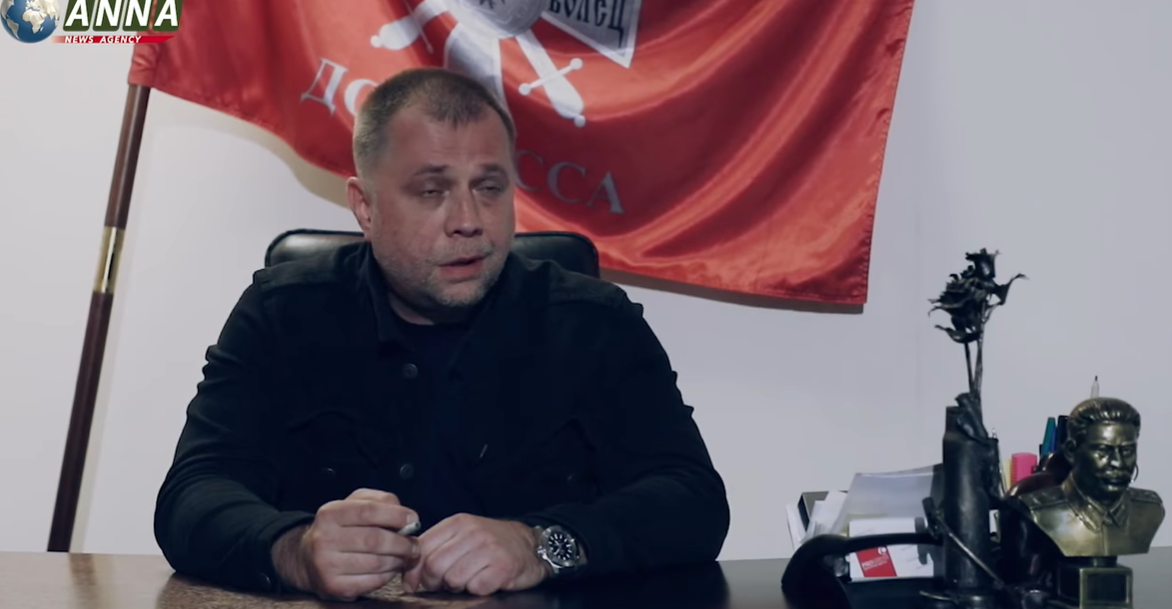 One of the first leaders of the self-proclaimed ‘Donetsk people’s republics’ has admitted that without Russia’s military intervention, he and the other ‘insurgents’ would be dead.  Alexander Borodai only acknowledged what Ukraine and all independent observers knew, however this taped admission is important for the International Criminal Court at the Hague. which is still deliberating how much of the war in Donbas can be considered an international armed conflict.

Tapes revealing information that is incriminating to Moscow have a habit of disappearing quickly, however journalist Denis Kazansky has posted a copy here.

Borodai was one of the Russians who held the top positions in the so-called DPR until the downing of Malaysian airliner MH17 by a Russian BUK missile on 17 July 2014 prompted the Kremlin to swiftly replace the Russians with supposedly local militants.  Borodai’s effusive words of gratitude in an interview to Anna News are worth quoting in full:

“I want to say that we are rather beholden to the President of the Russian Federation, Vladimir Putin.  By we I mean those volunteers who arrived in 2014. We owe him that smallest of things – our lives. Everybody who arrived in the first half of 2014 remembers what the situation was like in the second half of July 2014. If not for his policy, if not for his decisions and actions, we would not be here. In the same way as that there would not be Russian Donbas, and the Donetsk and Luhansk people’s republics”.

This is direct admission that the so-called ‘volunteers’, who were in fact heavily armed and financed by Russia, would not have held out against the Ukrainian Armed Forces without Putin’s “decisions and actions”.  These were in no way calls to dialogue, but substantial Russian military involvement in a country with which Russia was not officially at war.

Borodai is not the only Russian whose reminiscences should be of interest to the Court at the Hague.  Alexander Zhuchkovsky arrived in Sloviansk in April 2014, with the officially former Russian military intelligence officer Igor Girkin (Strelkov) and his people.  Zhuchkovsky holds overtly Nazi views and wrote that the war in Donbas was aimed at destroying Ukrainians because their existence as a separate people is not in the interests of the Russian people.

In his book ’85 Days in Sloviansk’, extracts from which Kazansky has posted here, Zhuchkovsky leaves no scope for doubt about Russia’s role in unleashing and continuing the war in Donbas.

Although Girkin and Zhuchkovsky following the official Russian line and claim that most of the fighters who seized control of official buildings in Sloviansk on 12 April 2014 were locals, this was not the impression Sloviansk residents had,  Nor is it the version recently disclosed, most helpfully, by a top DPR militant.  In a recent article, Danil Bezsonov wrote that the vast majority of residents of Donbas had not supported the militants, and that only 0.28% of the local male population had been ready to fight for secession from Ukraine.

The militants were driven out of Sloviansk and neighbouring Kramotorsk in early July 2014, and it was widely reported in Ukraine and in the West that Ukraine’s Army would soon regain full control.

Zhuchkovsky also admits that it was because of Russia that this did not happen, though complains that they did not bring in forces earlier.

“The first operational successes of Ukrainian forces in late June and early July 2014 first prompted Russian artillery fire from within Russian territory, targeted against advancing Ukrainian troops on their own soil, from mid-July onwards.

Direct intervention by Russian troops in combat roles then followed in the middle of August, when the prospect of rebel defeat had become realistic. The presence of large numbers of Russian troops on Ukrainian sovereign territory has, more or less, since become a permanent feature of the conflict.”