Crimean Tatar political prisoner sentenced to 11 years for "kitchen conversation" about religion and politics Russia wants 64-year-old Crimean Tatar to die in prison for refusing to collaborate in occupied Crimea Ukrainian POWs threatened with execution if they won’t blame Ukraine for Russia’s bombing of MariupolRussia sends forcibly mobilized Ukrainians from occupied Donbas to die as ‘live bait’ at the frontlinePregnant Ukrainian medic held in Russian captivity for four months “He lay on the sidewalk, naming towns and cities in Ukraine”. A digest of anti-war activities in Russia, 23-29 JulyRussian FSB threaten and beat imprisoned Crimean journalist and human rights defender Iryna DanilovychRussian prisoners offered big money and ‘amnesty’ to kill for Russia in Ukraine “Let’s Fight the Propaganda Together” Anti-war Activities in Russia, 9-16 July 2022Effective death sentence against veteran Crimean Tatar activist for opposing repression in Russian-occupied Crimea Feminists, “Railroad Partisans” and School-Leavers Protest. A Digest of Protests in Russia, 25 June-2 July 2022 Former HR Ombudsman Lyudmyla Denisova on her dismissal, 4 years of work, Ukrainians in occupied areas‘There were more than fifty bullets in the body of a friend’Medics taken prisoner by Russian invaders for treating defenders of Ukraine in MariupolRussia jeopardizes life of Crimean Tatar veteran activist imprisoned for defending political prisoners Russian medics acknowledge that 60-year-old Crimean Tatar political prisoner’s life is in danger Ukrainian POWs endure horrific torture by Russian captors "They gave us no protective gear apart from a helmet and a cross" – the disabled in Ukraine’s Occupied Territories are being forced to fight Ukrainian POWs and abducted civilian hostages illegally imprisoned in Russian-occupied Crimea Prohibited remembrance of Crimean Tatar genocide and mounting terror in Russian occupied Crimea
• Topics / The right to health care
• Topics / Penal institutions 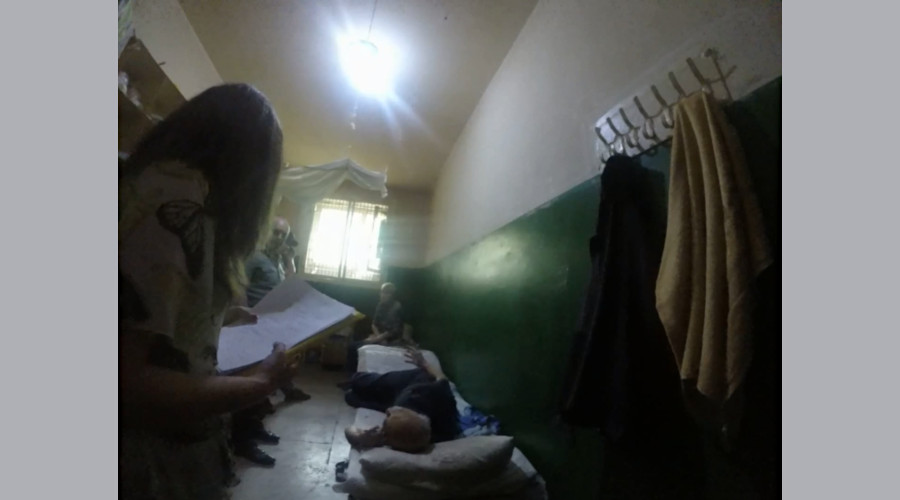 On 15 August 2019, a Kharkiv Human Rights Group [KHPG] monitoring group visited the Dnipro Penitentiary Institution [SIZO] No. 4 in order to check the conditions and medical care provided by the Inter-Regional Hospital for Prisoners.  Such inter-regional hospitals were originally established on the territory of the SIZO, but were aimed at catering for prisoners whose medical condition meant that they needed more care than was available in their own prisons.

The monitors arrived at SIZO No. 4 at midday.  They were met by the head of the SIZO who brought them into the territory of the institution without any problem. Having learned that they wanted to speak with sick prisoners, the head phoned the hospital and asked for somebody to come to his office to accompany us. That was when strange things began happening.  The staff of the hospital refused to come out and, according to the head, hid from the monitors. We had to wait for over half an hour. Finally a doctor came out to us and said that the head of the medical unit was away at a conference.

The inter-regional hospital occupies two floors of the institution. It was previously in a separate building however that building was handed over to the Health Ministry a while back, and the inter-regional hospital moved to the SIZO block.  It is separated into three departments: general medical; surgical and neurological. However, while this is de facto a hospital, it is not so legally and has no licence for medical practice. If one goes by the letter of the law, the hospital personnel have no right at all to provide anybody with medical care.

At first the monitors visited the general medical care unit, where there were 56 patients at that time. These included patients in a serious condition or suffering from serious illnesses.  There were prisoners with the four stage of HIV, or with hepatitis B or C, as well as people who had had one or two heart attacks before again ending up at the hospital. Almost all of them said that they were not being provided with any medical care.

The treatment, if you can call it that, is provided according to the following pattern. A prisoner arrives at the institution. He undergoes some kind of examination (though this is not done with all of them) and blood tests are carried out. After this, they prescribe treatment.  You would think this was standard and correct procedure.  However, treatment is not provided as prescribed. The doctors themselves say that the hospital is not provided fully with even the basic medical supplies, let alone those for specialized needs.  If the prisoner has family, it is they who buy the medicine.  If he has no relatives, then he is left to die or rely on his own organism to pull through. The doctors do not monitor the condition of patients. They don’t carry out daily rounds and do not even come when the prisoners ask for this. You can’t arrange to see a doctor. Complaints to the management of the hospital have no effect. The prisoners at most see the junior medical personnel, and they too don’t come willingly. If a prisoner needs additional examinations which cannot be carried out within the hospital, these are either not carried out at all, or with a huge delay.

The question arises: what is the point of the hospital at all, if it provides no medicines, no examinations nor doctors’ consultations?

The monitors then went to the neurology unit, where there were only five patients, none of whom was in a serious state. They made similar complaints. The surgery unit startled the monitors, with all of the prisoners asserting that they were provided with medical care, that they had no complaints against the personnel and that the latter’s attitude to them was impeccable. The monitors were somewhat surprised by such unanimity and then they recalled..

A few weeks ago, one of the prisoners who had undergone treatment at this hospital had got in touch with them. He reported that he had been forced to reject treatment. On one occasion, people with sticks had appeared in his cell and told him to write a statement rejecting treatment, before leaving. The prisoner had to do it.  He knows that in the hospital, some prisoners are there for months, or even years.  Not just for nothing – unofficially a person has to pay 500 UAH a month to be there. This information can hospital registers which shows when a prisoner arrived in the hospital; how long they were there; what medication was provided; and what the illness was. We don’t know whether this prisoner was telling the truth, however for some reason the monitors were not shown the registers.

Also one of the prisoners in the surgery unit told us that he had recently had an operation and that they had removed a tumour. All would be fine, expect that we had earlier been assured by the medical personnel that they had could not carry out any operations since they don’t have proper operating theatres. When the monitors pointed this, the prisoner quickly changed his story, saying that the operation had been carried out in another hospital, that he had been taken to Dnipro City for it.

There is in general a very strange situation. When the monitors asked to be shown the medical registers, they were reminded that the head of the hospital was not there, that she was at a conference and that in her absence nobody answered for anything. There was also no acting chief in her absence. The head supposedly does not allow the medical registers to be given to anyone without her consent.  Such an order was verbal, with nothing to confirm it.  Yet the medical personnel did not plan to comply with the written rules set out in legislation (Article 24 of the Penal Code).  It doesn’t matter that an assistant to a parliamentary deputy has the right of access to such documents. At that moment the medical personnel looked particularly frightened, and in fact looked frightened throughout the entire visit. It was as though they feared that the monitors would find something extremely compromising, and used all methods to obstruct such a search.

The Inter-regional hospital within the Dnipro SIZO No. 4 has a bad reputation. According to one lawyer who works with KHPG, her client who is held there and suffers from a serious condition (hepatitis C) was refused admission to the hospital. Another client with a festering injury to his nose was also not admitted to the surgery unit of the inter-regional hospital, or even to the general medical part of the hospital. The prisoners say that in the Dnipro SIZO at least one person in detention or convicted prisoner dies each month of serious illnesses, and we are inclined to believe them. For example, in the case of Solopova v. Ukraine. where the applicant was represented by our lawyer, Hennadiy Tokarev, the European Court of Human Rights found the provision of medical care in this institution to be inadequate.  The applicant in that case is suffering from cancer.

The monitors left the inter-regional hospital with heavy heart.  This is not a place that gives hope, but one that gives death.