‘Perm-36’ fined for not registering as ‘foreign agent’‘Perm-36’ labelled ‘foreign agent’ as Moscow seeks to expunge memory of the GulagPerm-36 Gulag Museum of Soviet Repression forced to closePlease support endangered Museum of Soviet RepressionRussia steps up persecution of Perm Memorial for honouring victims of Stalin’s repressionPoetry and Flowers Against the War – Digest of Russian ProtestsUkrainian political prisoner’s sentence increased for contempt of Russian kangaroo court Spontaneous Memorial on Ukrainsky Boulevard – Digest of Russian ProtestsTwo effective death sentences in Russia’s most savage attack on Crimean Tatar civic journalists and activists The KHPG receives half of Memorial’s Nobel, and will give the money to the victims of Russia’s invasion of UkraineRussia violates its own laws in murderous reprisals against Crimean Tatar human rights movement Savage sentences against Crimean Tatar journalists for reporting on Russia’s ‘state terrorism’ in occupied Crimea No end to Russia’s brutal reprisals against imprisoned 66-year-old historian of the Soviet Terror Russian court willing to kill 60-year-old Crimean Tatar political prisoner, heart attack or not ‘Stand up for your convictions, even if you stand alone!’ Anti-war activities in Russia, 3-9 OctoberRussian invaders destroy Memorial to Victims of Holodomor in Mariupol ‘Mogilisation’. Anti-war activities in Russia, 26 September to 1 OctoberHours after Memorial receives Nobel Peace Prize, Russia seizes its property for supposed ‘destructive activities’ Russian occupation means 14-year sentences for being Ukrainian and refusing to ‘confess’ to insane charges From a Zwastika to "No to the War". Anti-war activities in Russia, 9-18 September
• Topics / News from the CIS countries 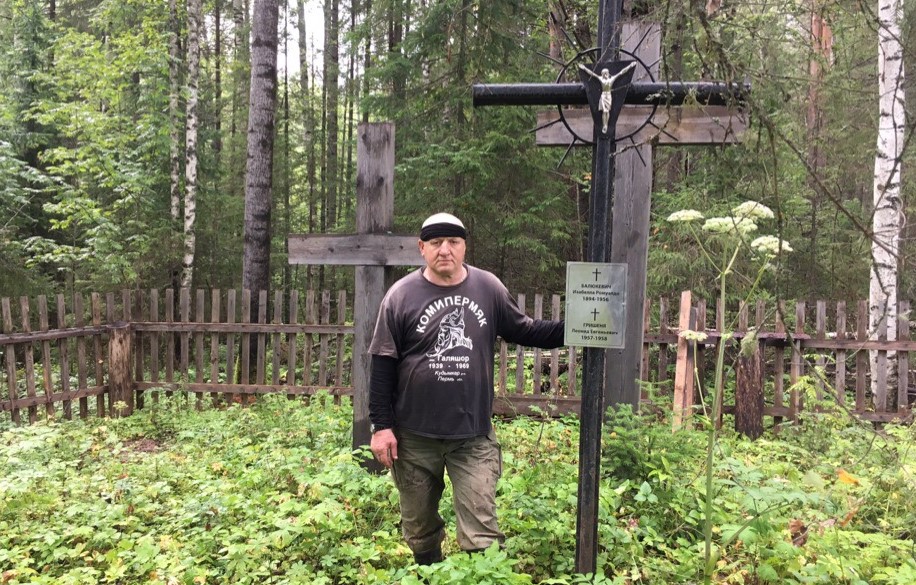 Russian police have initiated two criminal prosecutions against Russian and Lithuanian activists taking part in an expedition, organized by the Perm Memorial Society to honour victims of Soviet repression and tend to their graves.  The charges are evidently absurd and may be further ominous indication of the current regime’s determination to crush Memorial and to silence those who speak of the Soviet Terror, its victims and perpetrators.

As part of a Memorial initiative, volunteers from Russia and other countries search out abandoned settlements where people were forcibly deported during the worst years of the Soviet repression and the places where they are buried. They leave crosses, obelisks and also signs explaining that this is a place of burial of victims of repression.

The initiative has been working for the last 20 years and, until 2016, had no problems from the authorities.  Quite the contrary.  According to Perm Memorial head, Robert Latypov, a Plan was adopted at Perm Krai level on honouring the memory of victims of political repression, with this including the Memorial project. As Latypov says, “our activities were not simply permitted, but were officially stated to be a duty”.

Then in 2016, the Perm Krai’s Lithuanian community, who are themselves descendants of people exiled to a ‘special [forced] settlement] in Galyashor (Kudymkar District) established a memorial at the site of the forced settlement.  Galyashor has been abandoned for 40 years and access is only by tractor, yet the Kudymkar District authorities created a scene.  The Lithuanians and a local man, Leonid Ladanov were initially fined for supposedly infringing the rules for use of forest land, with the fines only cancelled after the Lithuanian embassy intervened.

The offensive has now seriously intensified.  The latest expedition of around ten Russian and Lithuanian volunteers, as well as one Italian citizen, arrived at Galyashor this summer.  Latypov explains that, as always, they sent an official letter to the local authorities, this time, to Valery Klimov, head of the Kudymkar District, but received an official refusal to facilitate their activities.

They did not abandon their work, which consisted of clearing the graveyard, and also taking interviews of local residents.  They had been in Galyashor for five days, with Ladanov registering them at his home, when, on 10 August, the police and officials from various authorities, turned up.  They were all interrogated for several ideas and told that the police had initiated criminal proceedings for supposedly illegally felling trees.  This charge (Article 260 of the criminal code) could carry a sentence of up to three years’ imprisonment.  The volunteers reject the accusation.  They removed dead wood and branches, etc. which had come down in storms, but did not touch any trees.  Latypov adds that the forest ranger confirmed to the police that the tree stumps at the site long pre-dated their expedition.

The second charge is even more grotesque.  Since some of the people actually slept at Ladanov’s mother’s home, not at his, the police have initiated charges of ‘fictitious registration of a foreign citizen’ with this also potentially leading to a 3-year sentence.

Since the trouble in both 2016 and 2019 has been from the authorities of the Kudymkar District, it is just possible that this is a purely local attack on Memorial, although that seems unlikely.

It was the Perm Krai that also saw the first concentrated attack on a museum informing the public about Soviet repression and its victims. The Perm-36 Museum was at the site of the notorious Soviet labour camp where many Ukrainian political prisoners were held, and where the great Ukrainian poet Vasyl Stus died in 1985.

Although here too it was supposedly the local authorities who drove the Museum out, this does not explain why in June 2014, the nationwide pro-Kremlin television channel NTV broadcast two programmes accusing the Museum and its staff of “re-writing history and glorifying Bandera supporters and fascists”.

The new offensive has also coincided with the shocking second wave of excavations at the site of the mass graves of victims of the Terror at the Sandarmokh Clearing in Karelia.  These are being carried out by the Russian Military History Society, a body created by Russian President Vladimir Putin to “consolidate the forces of state and society in the study of Russia’s military-historical past and counter efforts to distort it”. There are very real grounds for fearing that the Russian authorities are trying to rewrite history and claim that the over six thousand victims of mass executions at the site are not victims of the Terror, but Soviet POWs, supposedly executed while Karelia was under Finnish occupation during WWII.  These totally unnecessary excavations are taking place with gross infringements and witness accounts suggest that attempts are already underway to fiddle the results.