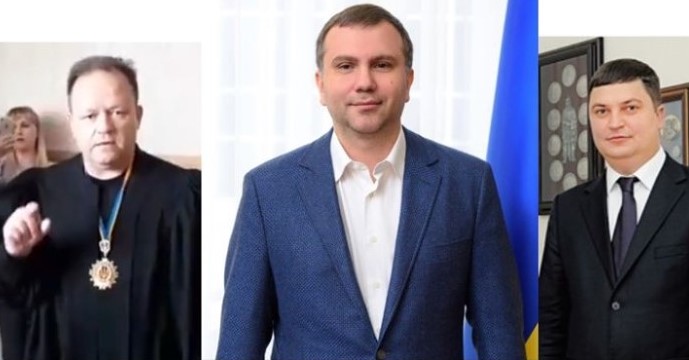 Pavlo Vovk was, until very recently, the head of the District Administrative Court in Kyiv.  He withdrew himself from this post after initial attempts to weather a major public storm over very grave allegations failed, and a criminal investigation was initiated with respect to Vovk and three other judges from the court.  It was the  Deputy Prosecutor General, Serhiy Kiz who had applied to HCJ for three of the judges: Vovk; Ihor Pohrybnichenko and a judge from the Suvoriv District Court in Odesa, Ivan Shepitko, to be suspended for the duration of the investigation. There is no explanation as to why HCJ refused a request to prevent judges accused of illicit use of court rulings to influence decisions made by the High Council of Justice and High Qualification Commission of Judges remaining in posts where they could exercise influence on other judges.

In expressing concern over the HCJ refusal, the DEJURE Foundation concluded that the members of the Council had not viewed any suggestion of a criminal offence in the revelations made public by the National Anti-Corruption Bureau [NABU] and the Special Investigations Department (an autonomous body within the Prosecutor General’s Office].

While some have criticized the manner in which the NABU operation and intercepted conversations, allegedly between the four judges, were made public, the material on the tapes certainly seems very damning.  The taped conversations appear to reveal Vovk, his deputy, Yevhen Ablov and the above-mentioned judges organizing the replacement of certain members of the High Qualification Commission of Judges [HQCJ] by others, as well as other shenanigans.

Vovk was first appointed president of the District Administrative Court by ex-President Viktor Yanukovych.  During Euromaidan, the court became notorious for unlawful rulings against peaceful assembly. In addition, Vovk himself had been the subject of numerous investigations into wealth that did not in any way correspond to his official earnings.    All of these reasons meant that he had a lot to fear during his qualification assessment from independent members of HQCJ, especially since he had received a negative assessment from the Public Integrity Council which can only be ignored with the support of a two-thirds majority of the members of HQCJ.

The investigators believe that efforts were made to remove independent members of HQCJ via a highly questionable court ruling in May 2019, and also pressure on the Human Rights Ombudsperson, Lyudmila Denisova, and the Head of the State Judicial Administration.

With respect to Denisova, the NABU investigators believe that Vovk had offered to quash certain protocols on proceedings initiated by the National Agency for the Prevention of Corruption (regarding irregularities in her public income declarations) in return for being able to dictate the two members of the HQCJ whom the Ombudsperson is entitled to appoint. There had, in fact, already been concern over Denisova’s sudden dismissal of Andriy Kozlov, an extremely independent member of HQCJ chosen after a public competition under Denisova’s predecessor.

Lawyer Roman Maselko commented, after the HCJ decisions on 20 August, that he had at least expected a decision to suspend Shepitko.  He notes that even Vovk called Shepytko’s ruling total lawlessness, and the Odesa Court of Appeal, when revoking it, called it a gross mistake that no intelligent judge could have made, and flagrantly arbitrary.

Clearly all these allegations need to be thoroughly investigated and any criminal charges brought eventually examined by a court.  The High Council of Justice, however, had not been asked to make a permanent decision, only to agree to temporary suspension.  Its members, nonetheless, refused.