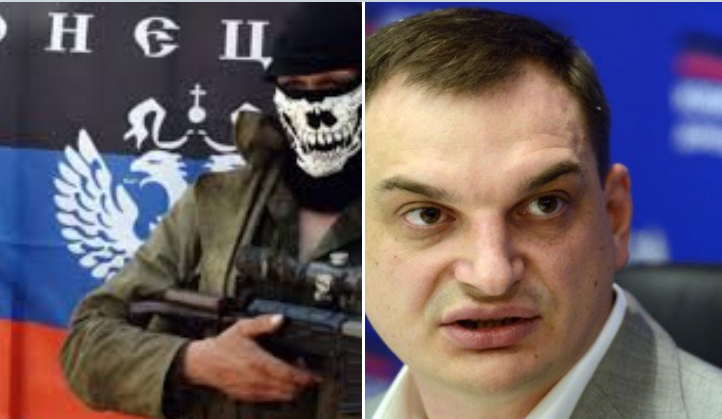 The trial is due to begin on 3 September of Roman Lyahin, one of the ideologues of the self-proclaimed ‘Donetsk people’s republic’ [‘DPR’].  Lyahin was also involved in the seizure of the Izolyatsia Arts Centre in Donetsk and its transformation into what former hostages, like Ihor Kozlovskyy and Dmytro Potekhin, call a real concentration camp.  They have added their voices to calls from the Izolyatsia Foundations and human rights organizations for Lyahin’s trial to be as open and as widely covered as possible.  It is vital that all of those implicated in the torture of hostages and other crimes are held to answer and they are therefore intent on avoiding any deals reached between the defendant and the prosecution on conditions that are unacceptable to the victims.

39-year-old Lyahin is himself from Donetsk and was one of the original believers in the Novorossiya / Russian World myth.  He played an active role in the creation of ‘DPR’ and in organizing and running the so-called ‘referendum’ of 11 May 2014 (details here). Like many of the original ideologically-motivated militants, he later came into conflict with the new leaders and was largely pushed aside, however during the first stage he was for some time head of the self-style ‘central election commission’  At a press conference in Kyiv on 2 September, organized by the Izolyatsia Foundation, Lyahin’s role was also stressed in leading the violent seizure of Izolyatsia, a former factory on territory of around 60 hectares which had been turned into an arts and educational centre.

After taking control of it in June 2014, the militants are reported to have immediately put a sniper in place, and turned Izolyatsia into a secret prison of the so-called ‘DPR MGB [ministry of state security]’ .  Its existence is denied by the militants themselves, and no international organizations have been allowed into it, which is why the testimony of former hostages like Potekhin and others is so vital.

Ihor Kozlovskyy, a renowned religious specialist, was seized by the ‘DPR MGB in January 2016, and was held prisoner under December 2017 when he was released as part of the last major exchange.

Kozlovskyy was 60 when taken prisoner, which may have been the reason why, although also held for most of that time in a basement ‘prison’, he was not himself imprisoned at Izolyatsia.  He is, however, fully aware of the treatment meted out there, and stresses that Izolyatsia stands out for the constant torture methods applied.  He knew of one person who was tortured every night, and stresses that this was not even to extract testimony, but rather sadistic methods simply aimed at breaking a person.  It is crucial, he says, that Lyahin and others are punished, since when evil is not punished, it returns a hundredfold.

Dmytro Potekhin was seized by the militants and held at Izolyatsia much earlier, in August 2014.  The well-known journalist and civic activist had deliberately gone to Donetsk without accreditation as he knew that journalists would, like in Soviet times, get their own ‘guard’ and be much more restricted in what they got to see. He had already heard rumours of secret concentration camps and knew that accredited journalists would not get to see them.  He managed to spend one day in Donetsk before he was seized and did indeed spend 48 days at Izolyatsia. Since his release, he has provided the SBU with a rough map of the territory, marking out, for example, places of forced labour.

He points out that, unlike SIZO, the basements at Izolyatsia were never designed for holding prisoners which means there is no running water in the rooms used as cells.  This provides extra leverage and scope for torture since the militants can also deprive or threaten to deprive hostages of water.

Potekhin also stresses that that the torture is not only of the people imprisoned, but of their families who are deprived not only of contact with the person, but even of any information about him or her.

He explained in an interview to Donbas.Realii that it was some of the locals imprisoned there who managed to get information out about his whereabouts after they were released.  Since he was well-known, and was in fact writing material for a Canadian journal, “the terrorists knew that they would bear personal responsibility if anything happened to me”. Since the situation in these basements was so bad, he assumes that they decided it was safer to simply ‘get rid of him’ by letting him go. Although because of his somewhat protected position, he only experience small degrees of physical violence, he has been able to provide detailed accounts of the forced labour, the use of mock executions, and other such methods used at Izolyatsia, which he stresses is just one of several such concentration camps.

Potekhin is quite clear that ‘DPR’ should be considered a terrorist organization which the Russian security service is behind. There are many reasons why people like Lyahin need to face trial, but he stresses one in particular, linked with the crime of creation and / or participation in a terrorist organization. There are efforts underway in the Kremlin and Moscow in general to conceal the crimes that were committed  If Russia and the Russian army which organized the BUK missile which downed Malaysian airliner MH17 killing 298 passengers and crew, as well as GRU (Russia’s military intelligence) and other divisions can be shown to be or to be sponsoring a terrorist organization, then this raises serious problems for the western states who are buying gas, etc. from Russia.

He and thousands of others can testify to behaviour that demonstrates Russia’s sponsorship of terrorism or behaviour like a terrorist organization.  For the moment, Ukraine is not recording this adequately, but is merely concentrating on Russia as aggressor, he believes.  Lyahin is one of those whose testimony is vital to demonstrating this terrorist organization link and for that reason there are efforts to get him out and prevent his trial.  These, he is adamant, must be resisted.

The first hearing in the trial of Roman Lyahin is due on 3 September at 15.30 at the Shevchenkivsk District Court in Kyiv.