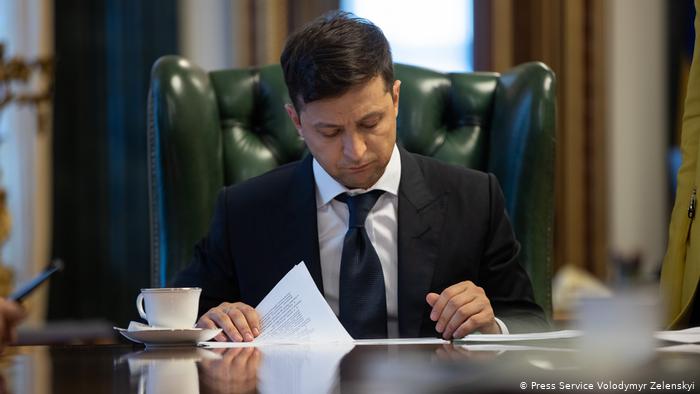 Ukraine’s President Volodymyr Zelensky has heeded calls to sanity and vetoed a populist and sloppy draft law on forced chemical castration for sex offenders.  There is no information as to what amendments the President has sent back for parliament’s consideration, but any review of a fatally flawed bill adopted at high speed for election campaign purposes is already welcome.

Two draft bill had been tabled in the Verkhovna Rada back in 2017 – the draft bill that eventually passed, No. 6449 on 16 May 2017, and No. 6607 on 21 June 2017.  Both bills had been sent to committees for consideration and the second, longer bill, was genuinely being worked on.  Mustafa Nayyem, then an MP, explained that he and colleagues had been working on proposals under No. 6607 for a a register of people convicted of sexual crimes against children.  This was also to propose castration, but with much greater restrictions, with the bill essentially drawn up by specialists (police officers; prosecutors; lawyers; criminologists and psychiatrists).  This was passed through its s first reading on 11 July 2019.  MPs had had little option since the bill had been supposed by 28 thousand people who signed a petition on the Verkhovna Rada site,

11 July, however, was just two weeks before the parliamentary elections.  There had also recently been a horrific murder of an 11-year-old girl, Dasha Lukyanenko.  No. 6449 had five authors, including Oleh Lyashko, whose Radical Party was badly trailing and looked likely to not be re-elected.  No. 6449 had not been discussed with specialists dealing with such crimes, which is doubtless the reason why it offered a blanket solution – “castrate them all!”.

It proposed chemical castration, via anti-androgen injections, for any person convicted of sexual offences against minors.  The only exceptions were if the offender had committed the crime under the age of 18 or if he was over 65.

An application for the bill’s consideration was lodged on 9 July, less than two weeks before the elections.  Then, on 11 July it was rushed through its first reading and, later that same day, in breach of procedure, it was passed in full.

No. 2449 virtually abandons the idea of a register, saying only in the transitional provisions that the Cabinet of Ministers must create such a register, without defining it, explaining how it would be brought it, who would use it, etc.

What it did retain was chemical castration so far-reaching that the bill ended up widely reported by the western media.

There is an internationally accepted illness involving paedophilia for which voluntary or forced castration can be applied.  According to criminologist Anna Mailar, such castration is “the only clinically tested means to date for treating the psychiatric disorder ‘paedophilia’, and it should only be applied to those offenders who fall under that category.  She cites evidence from Sweden, Denmark and Germany which suggests that the level of repeated crimes falls radically where the castration (usually voluntarily) is applied to people who are actually paedophiles in this medical sense of the word.  She is adamant that its use against people who do not suffer from this illness is unacceptable “since it constitutes torture and violates both Ukraine’s Constitution and international laws.”

Not every person who commits a sexual offence against a minor is a paedophile in this sense.  Perhaps some would consider that Roman Polanski should have been castrated for having sex with a 13-year-old, but this is only if one views castration as a punishment.  The same would apply to an 18-year-old who had sex with a 15-year-old girl.  This is, in principle, a crime, although it would be difficult to understand what was to be gained by forcing the person to undergo chemical castration.

Mailar was strongly critical of politicians who had cynically used Dasha Lukyanenko’s murder for their own electoral purposes, and adopted a law based on myths about castration and paedophilia that are not correct.

There had also been calls from human rights NGOs, including Kharkiv Human Rights Group, asking the President to use his power of veto and pointing out the law, if it came into force, would almost certainly result in numerous claims against Ukraine being won at the European Court of Human Rights.