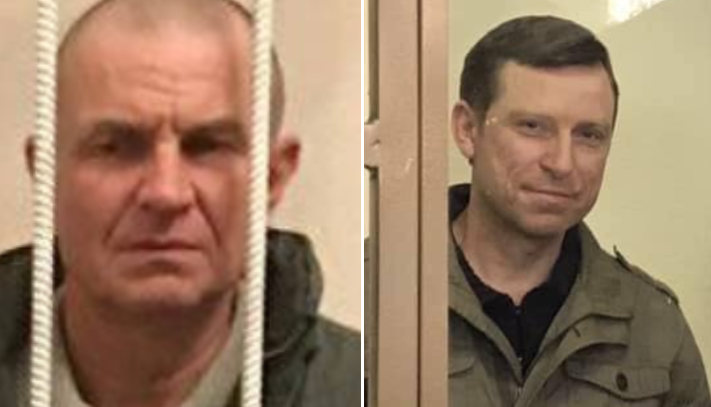 54-year-old Volodymyr Dudka’s health has deteriorated dramatically, yet the prison administration in Russian-occupied Crimea is providing only minimum treatment, and has refused to hand over the results of the last medical examination, carried out almost a year ago.  It seems likely that Dudka is suffering from a stomach ulcer and enlarged prostate, and his blood pressure is fluctuating dangerously.

Dudka’s lawyer, Sergei Legostov sounded the alarm after visiting his client on 2 September, and finding him in a great deal of pain, with only tablets that are clearly not an adequate response to his medical issues.  For the moment he remains in the Simferopol SIZO [remand prison] where the conditions are appalling, however he and Oleksiy Bessarabov are about to be transferred to Moscow for their appeal hearing.  This is an additional reason for concern since the journey to Moscow is likely to be long and gruelling, with the men denied any contact with their lawyers or family.

Despite a written application from Dudka, as well as constant requests from his other  lawyer, Oksana Zheleznyak, the SIZO has still not provided the results of Dudka’s medical examination, which took place back on 10 October 2018.  It was only on 8 August that Dudka was verbally told the results of that examination.  The latter mentioned a white scar in the stomach, suggesting that he had had a stomach ulcer, as well as an enlarged pancreas (benign prostatic hyperplasia) and kidney stones.  His son, Ilya, stresses that Dudka had not suffered from either of the latter two conditions before his arrest and imprisonment.

In reading out this assessment, some 10 months after it was issued, the doctor asked whether Dudka was taking any medicine, yet did not himself prescribe anything.  Without a physical copy of the document, Ilya Dudka cannot turn to a urologist in order to get the appropriate medication for his father.

It will soon be three years since Dudka, Bessarabov and Dmytro Shtyblikov were arrested in Sevastopol in Russia’s second attempt in the space of a few months to concoct a ‘Ukrainian saboteur’ plot

There had not been a single act of sabotage on the occupied peninsula, and the choice of would-be ‘saboteurs’ was extremely suspect: Shtyblikov and Bessarabov were world-known academics, while Dudka is a former naval captain who had retired early for health reasons.  He had recently become a grandfather, and spent most of his time with his granddaughter, making the suggestion that he was planning serious acts of sabotage that could have hurt his own family simply preposterous.

Both men had previously complained that non-procedural measures had been used to obtain biological traces.  Dudka, for example, was seized on the way to the doctor where he was being treated for an ulcer.  Saliva and other samples were taken without any protocol being drawn up and without his lawyer present.  Under such circumstances, it would be easy to later use the samples to fabricate incriminating evidence.

In virtually all such prosecutions, the FSB arrives with their own ‘witnesses’ which is a gross infringement of procedural legislation and makes it very easy for those carrying out the search ‘to find’ whatever is needed for their case.  Dudka’s son reports that the men who came to ‘search’ his father’s home quickly ‘found’ what they had brought, and then left, without bothering to pretend to search the kitchen or bathroom.

The appeal hearing will presumably be soon after the men reach Moscow.  Both have prepared a number of comments on the verdict, and their defence will certainly point to the above and other falsifications.  Both Dudka and Bessarabov are planning to challenge the fact that their Ukrainian citizenship is not mentioned in the documentation.