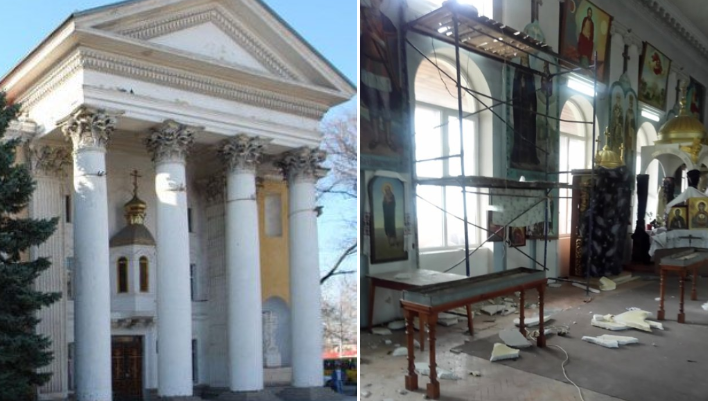 With Russia on the verge of destroying virtually the last remaining Ukrainian Orthodox Church place of worship in occupied Crimea, the UN Human Rights Committee has stepped in.  The Committee has applied its Rule 94 as an interim measures, and thus halted the eviction of the congregation from the Cathedral of Vladimir and Olga in the centre of Simferopol.   This is, of course, if Russia does not simply flout the order, however Serhiy Zayets, who is representing 50 members of the congregation, notes that Russia is shortly due to report to UN bodies on its human rights record in a broader context.  Flagrant refusal to obey such a ruling is fraught with “serious reputational losses”, Zayets believes.

Zayets applied to the UN Human Rights Committee on behalf of over fifty parishioners who complain of persecution by the Russian occupation authorities. In the letter dated 6 September, which he has made public, the Committee informs that the case has been accepted, and that Russia “has been requested” to not evict the congregation from the Cathedral until the case has been considered.  Russia has also been invited to provide comments on the substance of the complaints made.

This was categorically not what Russia was expecting.  Zayets reports that the Russian-controlled court of appeal had, at the end of August, upheld the ruling of the de facto ‘Crimean Arbitration Court’ from 28 June.  This had ordered the dissolution of the lease agreement for the Cathedral of Vladimir and Olga signed in 2002 between the Ukrainian authorities (the Crimean Property Fund) and the Crimean Eparchy of the Ukrainian Orthodox Church under the Kyiv Patriarchate, and the eviction of the Church congregation from the Cathedral.  Klyment had reported on 8 February this year that he had received a writ ordering that he vacate the Cathedral within 30 days.  The Archbishop then warned that this was likely to lead to eight parishes in rural areas also being forced to close. On 27 March, the Church received another letter from this ‘ministry’, which terminated the lease agreement . The letter claimed that this was because the Church is in debt, however the sum, as Zayets mentioned, was nominal, and in fact the Archbishop denies that anything at all is owed.

All such court procedure was, like the Russian-controlled appeal court ruling, a formal pretext.  As Zayets noted, the occupation regime had not even waited for the final stage and had already begun destroying Church property under the guise of ‘renovations’ and had set up a fence around the building. The dismantling of the roof resulted in a significant part of the Cathedral being flooded.  Then in late July 2019, Archbishop Klyment made photos public of the devastation inside the premises of the Cathedral and the Eparchiate.  He reported that the effective plundering of the Cathedral had taken place while he was away.  A large wooden Cross, which they had obviously decided was not worth stealing, could be seen dumped, together with workmen’s equipment.  The Archbishop stressed that this attack on the Church was a blow to Ukrainians for whom the Church, since 2014, has provided the only hearth for their Ukrainian identity since annexation.

This move is also part of the aggressive offensive and repressive measures against the Ukrainian Church in Crimea since annexation and against Klyment himself.  He was detained on 3 March, when he was already seated on a coach to Rostov in Russia for the latest hearing in the ‘trial’ of Ukrainian political prisoner Pavlo Hryb.   Two pretexts were found, both insultingly implausible, for holding Klyment in detention until late evening.  It is possible that the occupation authorities were planning administrative arrest, but were deterred by the publicity the move received (details here).