Ukrainians in imminent danger of losing their land and homes in Russian-occupied Crimea Russia equates defending political prisoners to ‘justifying terrorism’ in ban on Memorial Human Rights CentreDutch Prosecutor demands life sentences for four MH17 suspects. When will Russia go on trial? Russia brings posthumous criminal charges against the refugee it killed in occupied Crimea Russia brings grotesque new charges against Crimean Tatar Mejlis leader Nariman Dzhelyal Russia brings 17-year sentences without any crime to occupied Crimea Indefinite ‘quarantine cell’ used against Crimean Tatar who exposed Russian FSB torture Why was the list of candidates for the position of a judge of the European Court of Human Rights from Ukraine rejected?New charges in Russia"s revenge persecution of Crimean Tatar Mejlis leader Nariman Dzhelyal “Shoot me now!” Harrowing details of Russian FSB torture of Crimean Tatars seized in revenge for "Crimea Platform"ECHR demands answers from Russia as Crimean Tatars tortured and prevented from seeing proper lawyers A brief description of the KHPG strategic litigations in the first half of 2021Russia lodges a surreal ECHR inter-state claim against Ukraine over MH17, water for occupied Crimea & "discrimination"Russia’s denial of accountability for MH17 in tatters with more court cases looming Legal Opinion on the political motives of the criminal prosecution and violations of human rights in criminal proceedings of Konstantin ZhevagoRussia refuses to allow the refugee it killed in occupied Crimea to be buried Frustrating sentence over savage torture and killing of Maidan activist Yury Verbytsky Mothers of Crimean Tatar political prisoners prosecuted for affirming their sons’ innocenceUkraine’s most malicious miscarriages of justiceRussia uses same fake witnesses in multiple ‘trials’ of Crimean Tatar political prisoners
• Topics / Implementation of European Law
• Topics / Human Rights Abuses in Russian-occupied Crimea 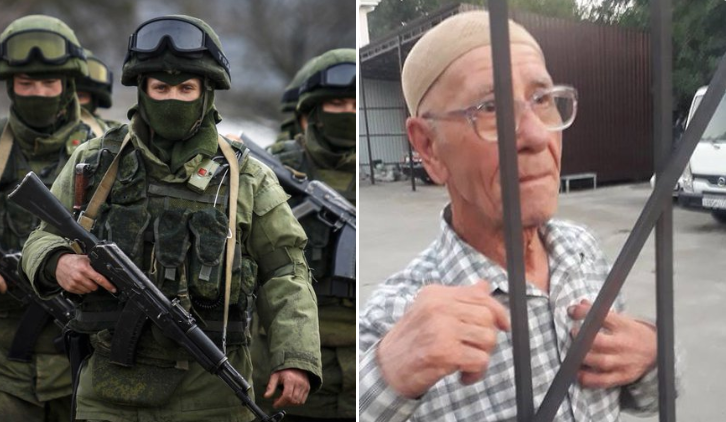 Russia’s representatives have assured the European Court of Human Rights that Ukraine in February – March 2014 was controlled by ‘fascists’ from whom Russian soldiers had merely ‘protected’ Crimeans until 18 March 2014 when the latter ‘joined’ Russia.  Allegations of grave human rights violations, they asserted, were “groundless” and Ukraine’s application against Russia “political”, based on a “propaganda imperative” to blame Russia for events in Crimea and Eastern Ukraine.

The Case of Ukraine v. Russia re. Crimea (application no. 20958/14) was initially lodged on 13 March 2014, and has taken over five years to reach the stage of court examination. As in all the international court cases which Ukraine has brought against Russia, the latter has sought, first and foremost, to claim lack of jurisdiction and get the case thrown out.  It claimed during the hearing that the case is ‘political’, and that ECHR would be opening a Pandora’s box if it takes it on. While the cases merits are for the Court to decide, it is by no means all cases reviewed by the ECHR’s Grand Chamber that are given full public hearings, like that on 11 September.  The version of reality presented by the Russians and their British QCs [top barristers] is also in stark contrast to the interpretation of events and assessment of the human rights situation by all democratic states, the UN General Assembly and, essentially, all international bodies.   The ECHR Grand Chamber heard both sides and will now consider its judgement in private.

Ukraine alleges violation by the Russian Federation of a number of the rights enshrined in the European Convention on Human Rights, including the right to life; the prohibition of torture; right to a fair trial and freedom of expression and religion. Specific violations include murder, enforced disappearances; politically motivated trials and much more.  Ukraine maintains that Russia exercised effective control over Crimea from 27 February 2014, and “has exercised jurisdiction over a situation which has resulted in numerous Convention violations. “   Much of the material was put together in cooperation with human rights NGOs, in particular the Crimean Human Rights Group and Ukrainian Helsinki Human Rights Union.

The appearance in Simferopol on 27 February 2014 of large numbers of Russian soldiers without insignia, and their seizure of the Crimean parliament and other strategic places were closely followed by all democratic countries, and extensively reported by the western media.  It was partly the fact that journalists were almost immediately on the scene sending out photos and video footage of all that was happening that made Russia’s blanket denial of involvement at the time so absurd.  Over five years later, the same Kremlin narrative about an alleged coup in Kyiv, rabid fascists and Russian soldiers merely ‘protecting Crimeans’ from a bloodbath was essentially rehashed for the Court in Strasbourg.  The aim was to ‘prove’ that Russia only gained “potential jurisdiction” from the formal date of annexation, namely 18 March 2014, and to deny all human rights violations after that date.

Russia’s use of soldiers without insignia and the so-called ‘self-defence’ armed paramilitaries led by Russians like purportedly former GRU [military intelligence] officer Igor Girkin were aimed at denying precisely the effective control which, as Ukraine maintains, Russia had of Crimea from 27 February.  Like Russian state-controlled media, the Russian representatives avoided mention of the ‘parliamentary session by gunpoint’ which installed Russia’s puppet leaders, and the fact that the pseudo-referendum basically lacked any choice of options; was held at gunpoint, ‘observed’ by Russia’s far-right and other friends and that the results were even shown to be rigged by the Russian President’s Human Rights Council.  This is not to mention the fact that the referendum was, in any case,  against Ukraine’s Constitution, meaning that even if the stunt had genuinely been organized by some part of Crimean society, Russia could not legitimately use it as pretext for annexing Ukrainian territory.  The event was also boycotted by the Mejlis or representative body of the Crimean Tatar people who, as the main indigenous people of Crimea, have exercised their right to self-determination by affirming their ongoing wish to remain within Ukraine.

If Galperin’s presentation seemed quite predictable, there were some extraordinary moments in the address given by British QC (barrister) Michael Swainston from the Russian team.

He reiterated the claim that Russia had had no effective control before 18 March 2014, and that it only accepts “potential jurisdiction of the Court” from then.  This, he argued, was because Ukraine’s application was “not proper”.  It is unclear whether Swainston felt rather more queasy than Galperin about ignoring the gunning down of peaceful protesters on Maidan, the fact that Yanukovych had fled the country and much more, or simply decided that his Russian colleague had spent enough time blurring that part of the facts. What he did claim was that “Ukraine has felt a propaganda imperative to blame Russia for what happened in Crimea and, indeed, for what happened in East Ukraine”, and that this is a political case, with “alleged” human rights violations secondary.

Swainston spent a lot of time and verbal skills trying to rubbish the weight of evidence of human rights violations which has been confirmed by all international bodies and NGOs.  With respect to the NGOs he uses arguments about foreign grants that are extremely popular in Russian under President Vladimir Putin, where organizations receiving grants from abroad are labelled as ‘foreign agents’ and under strict control. Swainston avoids the term foreign agent, but does try to triumphantly prove that NGOs involved in preparing evidence in this case received US, Dutch and British grants.  He claims that this places their objectivity in question, which is an interesting position for a person who is undoubtedly receiving significant financial remuneration from the Russian state.  Unlike Swainston whose payment is directly dependent on his supporting Russia’s position in this case, the foreign governments or George Soros’ Open Society Foundation who give grants to Ukrainian NGOs require only that the money is properly spent.

Swainston claims that “enormous resources have been deployed on producing fake evidence against Russia in these applications by Ukraine” and spends some time pushing the idea that no evidence of the human rights violations and no victims’ testimony is presented.

Ukraine’s Deputy Justice Minister Ivan Lishchyna and British QC Ben Emmerson rejected all of the above arguments.  Emmerson pointed out that Ukraine is accusing both agents of the Russian state and their proxies of human rights violations, which Russia as occupying state is responsible for.   He dismissed Swainston’s claim that there is no unifying feature among the victims of these violations saying that all, whether Ukrainian soldiers, journalists, Crimean Tatars or ethnic Ukrainians, they all share the fact that they were or were perceived to be opponents of Russia’s annexation and occupation of Crimea.  Emmerson’s address can and should be heard in full at around 102 here.  In it he refutes Swainston’s efforts “to muddy the waters” by directly citing report after report, confirming a real and grave deterioration of human rights and persecution of those who opposed Russia’s ongoing illegal occupation of Crimea, as well as through a detailed description of the real military coup in February 2014 – that carried out by Russia in Ukrainian Crimea.