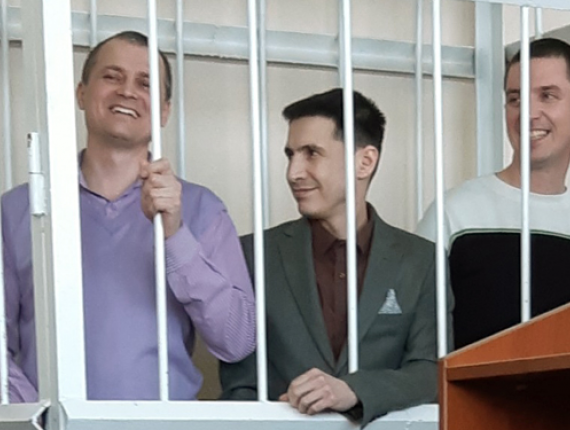 A court in Saratov has sentenced six more Jehovah’s Witnesses to terms of imprisonment for practising their faith.  These are the first prison sentences handed down since Russia first reverted back to Soviet repressive practice by banning this world faith in April 2017, and then imprisoning Dennis Christensen for six years in February 2019.  If the new sentences are upheld at appeal level, this will mark a worrying new escalation in religious persecution, with more imprisonments likely, both in Russia and in occupied Crimea.

The six men are all from Saratov.  On 19 September, judge Dmitry Larin from the Leninsky District Court of Saratov sentenced Konstantin Bazhenov and Alexei Budenchuk to three and a half years’ imprisonment; Felix Makhammadiev to three years; Roman Gridasov, Gennady German, and Alexei Miretsky to two years. They were also barred from holding leadership positions in public organizations for a period of 5 years and restriction of freedom for 1 year.   Three of the men (Bazhenov; Budenchuk and Makhammadiev) had spent almost a year in detention following the initial armed searches on 12 June, 2018.  June 12, 2018, and all were taken into custody in the courtroom. All six of the men have families, with Budenchuk’s two children still at school, a Jehovah’s Witnesses press information officer reports.

The charges here, and in virtually all prosecutions of Jehovah’s Witnesses, were under part 1 of Article 282 of Russia’s criminal code, which prosecutes for something called ‘organizing the activities of an extremist organization’.  The truly shocking part of such prosecutions is that no crime is required for a person to receive a prison sentence. Since the Russian Supreme Court ruling on 20 April 2017 which banned a world faith as supposedly ‘extremist’, the prosecution only has to prove that the defendant is a Jehovah’s Witness, which is not something that any of the men have denied.   Russia has never provided any sensible explanation for calling the Jehovah’s Witnesses ‘extremist’, nor has it found any evidence of behaviour that could cause danger to the public.

Such profoundly flawed prosecutions had already long been practised against Muslims, particularly against Crimean Tatars in occupied Crimea.  The similarities are not merely confined to the fact that both bans (on the peaceful pan-Islamist organization Hizb ut-Tahrir and on the Jehovah’s Witnesses are based purely on judgements from the Supreme Court, not on any crime committed.  There are also similarities in the gratuitously violent armed operations, the dodgy ‘experts’ and suspect ‘secret witnesses’

The ‘expert assessments’ thus far seen are just as questionable as those in Hizb ut-Tahrir cases. During the court hearing on banning the JW Bible and several religious publications, a ‘comprehensive linguistic and religious forensic assessment was presented.  This had been produced with the help of ‘experts’ from the Centre for Socio-Cultural expert assessments’, whose ‘experts’ have also provided ‘assessments’ backing the prosecution in the politically-motivated prosecutions of historian Yuri Dmitriev and Pussy Riot.

Such assessments and the bans on religious publications even prior to the ban on the Jehovah’s Witnesses as a faith were based solely on the claim that the Jehovah’s Witnesses incite religious enmity and denigrate other religions by virtue of their confidence that their faith is the right one.  One of the ‘expert assessments’ used to justify the Supreme Court ban pointed to the conviction that the path taken by the Witnesses makes them the chosen of God.  As the Memorial Human Rights Centre has pointed out, this is essentially a feature of all religious faiths.

In occupied Crimea, the case is known of one young believer who had been ordered to provide ‘proof of change of faith’ in order to be eligible for alternative civilian service.  This is in addition to Russia’s grave violation of international humanitarian law by conscripting young men on illegally occupied Ukrainian territory.

The use of ‘secret witnesses’ in the case of the Jehovah’s Witnesses is particularly offensive given that it is each believer’s duty to spread news about their faith to others.  That is now a very dangerous thing to do, since you could be sharing your beliefs with FSB infiltrators, quite likely armed with tape recorders.