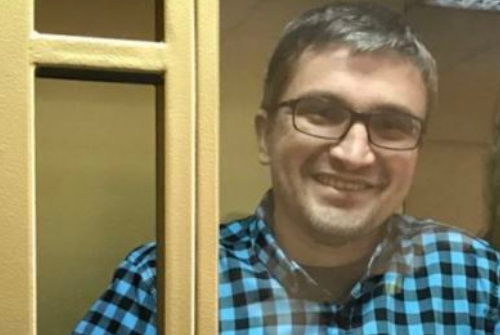 A Russian prosecutor has proposed imprisoning civic journalist Nariman Memedeminov for six years, with the formal charges against him pertaining to three totally harmless YouTube videos, two of which pre-dated Russia’s invasion and annexation of Crimea.  Lest anybody doubt that the Crimean Tatar civic journalist is in fact being punished for systematically reporting on political persecution, the prosecutor has also asked that Memedeminov be prohibited from administering any Internet site for 5 years.

36-year-old Memedeminov was the first person to begin attending and reporting on politically-motivated court trials in occupied Crimea, and FSB officers appearing as witnesses for the prosecution have not even tried to deny that this was the real reason for his arrest on 22 March 2018.  During the court hearing on 26 March, he was asked by the judge whether he had received an income from his civic journalism.    “No”, he replied, “I didn’t receive any income for it.  I was forced to engage in it (the journalism) since, unfortunately, there are no other media in Crimea”.  Since annexation, Russia has eliminated any independent media in Crimea, and it is now quite openly attacking civic journalists like Memedeminov.  This is one of the reasons why it is vital that foreign diplomats, journalists and representatives of human rights NGOs are present at the last court hearings in Rostov-on-Don.  Memedeminov has , long been recognized as a political prisoner by the Memorial Human Rights Centre and his imprisonment has been condemned by the international community.

This is a political trial, and the very fact that the judges at the Northern Caucuses Military Court in Rostov-on-Don did not throw out the absurd charges was just the first indication that a just verdict should not be expected.  Memedeminov gave some idea of the surreal nature of the proceedings during a very powerful address on 26 September.

He was dismissive of the “verbiage” from the so-called experts who, faced with totally innocuous videos, on the one hand, and the FSB’s accusation of ‘justification of terrorism’ on the other, came up with absurd phrases which bore no scrutiny.  They talk of “encroachment”, but don’t explain what he was supposed to be encroaching upon” or, for example, how he was supposed to be “encroaching upon public security”.  Instead they plunge into effective conjecture about what something might be perceived by somebody as meaning.

What this prosecution is really about is quite clear, and can be seen in the questions that the prosecutor asked defence witnesses. He wanted to know if Memedeminov sympathised with imprisoned Crimean Tatars.

“Of course Memedeminov sympathised with imprisoned Crimean Tatars! After all, we Crimean Tatars, since 2014, that is after that very public security was violated by armed men in Crimea, suddenly became “terrorists and extremists”.  Of course I sympathised! And I collected money to help and support their families, to pay fines.  I wrote about them and made videos, and so what?

While he sees history, and specifically the political persecution of the Soviet period being repeated, there is one fundamental difference.  At court hearings, his lawyer passes him greetings from all over the world. “How do these people know me? And who am I am at all to be known abroad? After all, until the arrest of Crimean Tatars and [ethnic] Ukrainians in Crimea, that is, until the point when, as the prosecutor puts it, “he began to sympathise with them”, these people had no idea that I existed.”  That has now changed. “They arrested a journalist in Crimea, and the world knows about it.

That’s wonderful, however, I am still imprisoned and you still have me on trial. And soon, probably, you will convict me….

I may only be one, but there are thousands of my people. and just as many who sympathise.  They will definitely not forget. Someone from among those like me, who care and feel solidarity, will take up their pen…”

As reported, two FSB officers, appearing for the prosecution, admitted that Memedeminov had come to their attention when he began visiting the court detention hearings in the case of the first four men arrested in Sevastopol in January and April 2015.

Memedeminov was arrested on 22 March 2018 after a search by armed and masked enforcement officers of his home in Kholmovka (Bakhchysarai district).  Using foul language and totally gratuitous force, the men broke down the front door and forced Memedeminov to the floor in front of his terrified children.

The pretext was three video clips from 2013 – 2014, which the FSB claim contain ‘public calls to carry out terrorist activities, public justification of terrorism or propaganda of terrorism via the Internet’ (Article 205.2 § 2 of Russia’s criminal code).

There were no ‘calls’ to anything, and not a whiff of ‘terrorism’.  Russia’s Supreme Court may have made Russia the only country in the world that calls the peaceful pan-Islamist movement Hizb ut-Tahrir ‘terrorist’ – and 15 years on, has yet to provide a good reason, but Hizb ut-Tahrir was then and is now legal in Ukraine.  Memedeminov was merely reporting a perfectly legal meeting taking place on Ukrainian territory.

The second video  is from 10 October 2013,   It is called ‘Protest gathering instead of a conference’ and reports that people planning to take part in a  Hizb ut-Tahrir conference were not allowed into the Ukrainian Theatre in Simferopol,   Once again, no calls to anything in the video, let alone to violence or ‘terrorism’.

The prosecution has tried to claim that by posting these videos, Memedeminov was “drawing an unlimited circle of people into the activities of the organization.”

Here, as with other dodgy prosecutions, the FSB has used their own ‘experts’ who generally lack specialist knowledge, but who can be relied upon to give ‘expert assessments’ essentially confirming whatever criminal charges the FSB chooses to lay.

Both Memedeminov and his lawyers will address the court on Monday, 30 September, after which a date will be announced for the verdict.