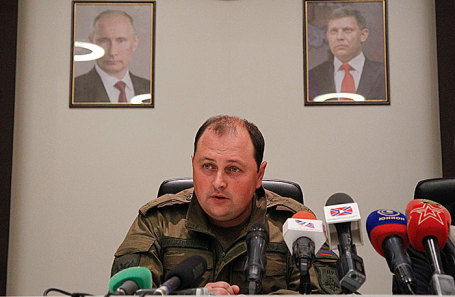 Russia’s narrative about a ‘civil war’ in the East of Ukraine has received another knock, one that is totally self-inflicted.  Dmitry Trapeznikov, a former leading figure in the self-proclaimed ‘Donetsk people’s republic’ has been appointed acting mayor of Elista, a city in the Russian Federation republic of Kalmykia.  Another ‘Ukrainian separatist’ has thus proven to be at very least a Russian citizen, and one with some very good Russian protection since it was his banditry and fraud that forced him to leave Donbas for Russia after the violent death of his close ally and nominal head of DPR, Alexander Zakharchenko at the end of August 2018.

The Russian Wikipedia actually calls Trapeznikov “a Russian political figure”.  He was born in Krasnodar in 1981, though his family moved to Donetsk shortly afterwards.  If he has now assumed a political post in Russia, it seems likely that he always held Russian citizenship, rather than Ukrainian.  According to Denis Kazansky, Trapeznikov was one of the key figures in DPR together with Zakharchenko and Alexander Timofeyev (‘Tashkent’), and as such he bore full responsibility for all the abductions; torture; robberies and banditry carried out in the so-called ‘republic’.  He very briefly assumed formal command after Zakharchenko was killed when a bomb went off in Zakharchenko’s own, heavily guarded, café, but according to Kazansky, he and others from Zakharchenko’s close circle were driven out of DPR by the Russian ‘administrators’ who wield real control.

Given his new position only a little over a year later, it is interesting that the Russian state-controlled media all began to blame the people around Zakharchenko, including Trapeznikov, of banditry and embezzlement.  One pro-Kremlin journalist accused Trapeznikov and ‘Tashkent’ for “total financial, economic and political lawlessness and corruption” and promised that they would not be allowed back to DPR. ,

Kalmykia, it seems, is another matter, with Trapeznikov now a “Russian political figure” and no longer forced to pretend to be a ‘Ukrainian separatist’ fighting a supposed ‘civil war’.

Why Trapeznikov clearly has powerful patrons, is not clear, but it assuredly has nothing to do with the local community in Elista who have been protesting over the appointment which has been foisted upon them.  They seem to be most angered that they are being forced to accept a person from outside who knows nothing about Kalmykia.  It would be harder, though not impossible, for them to find out just why Trapeznikov’s behaviour while in ‘DPR’ is also no recommendation.  This was, after all, corruption on a large scale, including stealing humanitarian aid, and that is before considering the abductions, the torture and use of secret prisons.

Kazansky points out that the same ‘Russian world’ that Russian and pro-Russian militants tried to install in Donbas is that seen in Kalmykia also, where ‘mayors’ are foisted upon citizens, and any ‘elections’ are as false as in Soviet times.  It is in what Moscow tries to claim is ‘fascist Ukraine’ that citizens can actually vote for the people who are to represent them.

Trapeznikov’s appointment, he notes, should be a salutary lesson to those still believing that things are only bad because of a few corrupt individuals, and that Russian President  Vladimir Putin doesn’t know what is happening at local level and if he did, he would step in and change it.  Trapeznikov was removed from ‘DPR’ after Zakharchenko’s death, and if Russian propaganda media were not prepared to touch on the abductions and torture methods, they did spell out the corruption and banditry.  Yet a mere year or so later, the same Trapeznikov is ‘fully rehabilitated’ and given a post in Kalmykia.   He was congratulated by Vladislav Surkov, the Putin aide who is believed to control the so-called ‘republics’ in Donbas and who said that he was proud that “our Donetsk staff are needed”.

Attempts in March 2014 to seize power in Donetsk and other east Ukrainian cities with the use first of local far-right and pro-Russian activists, and then of Russian thugs, brought across the border as ‘tourists’, failed. On 12 April 2014, ‘former’ Russian military intelligence officer Igor Girkin (Strelkov) and around 50 well-armed and trained special fighters seized control of Sloviansk in the Donetsk oblast.  Over the next months, the so-called ‘Donetsk republic’ was created and led mainly by people from Russia like Girkin and Alexander Borodai.  It was after the downing of Malaysian airliner MH17 by a Russian BUK missile on 17 July 2014 and the first moves in Europe towards real sanctions against Russia, that the leaders in ‘DPR’ were replaced by supposed locals.  One such local has now become Russian acting mayor of Elista.