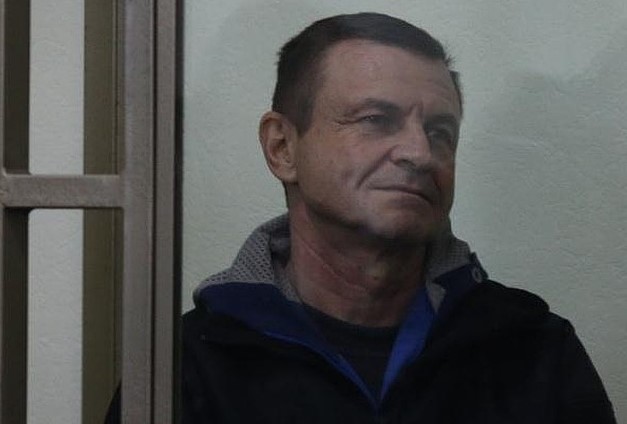 The old Ukrainian naval documents which Russia appropriated after invading and occupying Crimea would not have mentioned Volodymyr Dudka’s infant granddaughter.  Her existence, however, made Russia’s attempt to turn her doting grandfather into a ‘Ukrainian saboteur’ planning acts of terror throughout Crimea especially cynical.

Dudka turned 55 on 30 September 2019, far away from his son and granddaughter and without any contact even with his lawyer.  He and Oleksiy Bessarabov are being transferred from a remand prison [SIZO] in Rostov-on-Don to Moscow for an appeal hearing against their 14-year sentences on the above ‘sabotage’ charges.  Such transfers of prisoners in Russia are always gruelling and dangerous, with the men deprived of any contact at all with their lawyers and families.  This is especially dangerous in Dudka’s case because of his serious health problems, linked with a stomach ulcer, enlarged pancreas and high blood pressure.

Dudka was, in fact, on his way to the hospital for treatment of his inflamed stomach ulcer on 9 November 2016, when he was seized by FSB [Russian security service] men.  On that same day, the FSB arrested two world-known academics, Oleksiy Bessarabov and Dmytro Shtyblikov.  Two months earlier, Russia’s first attempt to convince the world that it had arrested Ukrainians planning acts of sabotage in Crimea went wrong, in part because of the haphazard nature of the arrests of men who didn’t know each other.  This time, they targeted three friends, all of whom had some earlier link to Ukraine’s navy.

The FSB first claimed on 10 November 2016 to have detained “members of a terrorist – sabotage group from the Ukrainian Defence Ministry’s Military Intelligence who were planning to carry out acts of sabotage on sites of military and vital civilian infrastructure in Crimea. It asserted that powerful explosive devices, weapons and ammunition had been found, together with special communications devices, maps of the supposed sabotage targets and “other material evidence of their criminal activities”.

Despite such grandiose claims, the only video footage released over the next few days was of supposed ‘confessions’ to working for Ukraine’s SBU [Security Service] from Shtyblikov and Bessarabov, and a bizarre video showing the seizure of Shtyblikov, and then the ‘search’ of his home.  Had the FSB really found weapons and ammunition, they would have shown them immediately, Instead, the first FSB video focused on, for example, the Ukrainian trident, a Ukrainian flag on the wall, and Dmytro Yarosh’s ‘Right Sector’ business card.  The card was described on Russian television as being from the nationalist movement banned in Russia.  The channels chose not to mention that this same card had become the target of a hilarious range of Internet memes after Russia had produced it intact and looking remarkably untouched from a totally gutted out car at a checkpoint near Kremlin-backed militant-controlled Sloviansk in April 2014.  It was claimed to be ‘proof’ that Right Sector was behind the shelling.  ‘Weapons’ were also triumphantly demonstrated by the camera, however these were swiftly identified as being airguns which Shtyblikov used in playing Paintball.

The same absurdities were seen with the map which Dudka and Bessarabov were later claimed to have used while travelling around planning acts of sabotage.  The only DNA from either of the men was on the rim of the map, which made no sense for a map both were supposed to have been using.  It did, however, explain why DNA samples were illegally taken from the men without any record kept shortly after their arrest.

Dudka was only able to see an independent lawyer five days after being seized, on 14 November 2016.  The meeting was cut after only 17 minutes, probably because Dudka had managed to tell the lawyer that he was innocent and that the ‘confession’ he had also given had been under pressure and threats to his family.  Bessarabov appears to have spent even longer without a lawyer, and Shtyblikov, whom the FSB had designated the ‘ringleader’, was effectively always prevented from receiving independent legal assistance.  This is very likely the reason why he agreed to ‘admit guilt’ and on 16 November 2017 received a five-year sentence.

The conditions in the Simferopol SIZO where the men were held for a long time, as well as those in Rostov, are tantamount to torture even for men in good health, and Dudka’s condition has seriously deteriorated during the last almost three years of imprisonment.

The men’s ‘trial’ was based on ‘evidence’ so clearly falsified that, according to Dudka’s lawyer, Sergei Legostov you wouldn’t find it in the worst detective novel.  This included, for example, the claim that some person involved in Ukrainian military intelligence in Kharkiv had asked a stranger in Crimea to buy the telephones and pass them over to the defendants.   Dudka’s son, Ilya reports that the men who came to ‘search’ his father’s home ‘found’ the telephone very quickly, then left, without bothering to pretend to search the kitchen or bathroom.

The most ferociously long sentences – 14 years – were kept for Dudka and Bessarabov.  This pattern has been seen in many other Russian trials of Ukrainian political prisoners – the sentences are significantly worse if the defendants refuse to ‘cooperate’ by confessing to crimes they did not commit.

The appeal hearing at the Russian Supreme Court is scheduled for 14 October 2019.